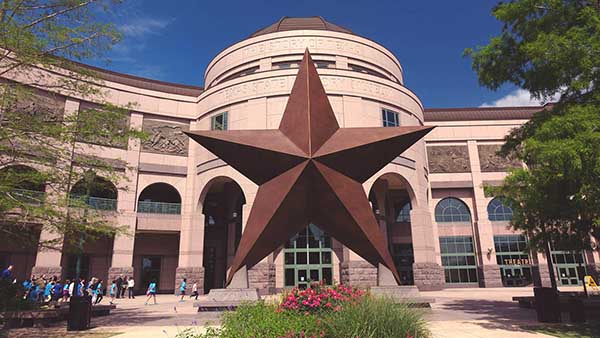 While Bob Bullock was hospitalized in January 1996 for treatment of pneumonia, his budget director got a night-time call from the Lt. Governor.

"What does it cost to build a museum?" Bullock asked. "Well, Governor, are you thinking about a museum like the State Archives Building or one like the Smithsonian?" Mike Morrissey wanted to know. "Something that Texas can be proud of," said Bullock.

He had long dreamed of a state history museum. After his terms in the Texas House of Representatives, Bullock had been appointed to the Texas State Historical Survey Committee/Texas Historical Foundation in 1963. He set heavy store on "saving our priceless heritage" for future generations by helping promote the marking and designation of state historical sights throughout Texas.

Bullock had spent a lot of time traveling the state during the 40 years he was a state officeholder and campaigner. A state history buff, he was troubled there was no central place for Texans, especially young ones, to learn the story of the Lone Star State.

Bullock thought Texas needed a state history museum, and he said so to anyone who would listen. In 1996, he was in his last term as Lieutenant Governor and in the perfect position of power to make the dream come true. He wanted a museum that would serve as a hub for all the specialized historical museums across Texas. He envisioned a museum that could borrow and showcase the best exhibits from all over the state, one that would be a magnet for tourists and school children alike, but would also become self-sustaining. With that vision, he set his staff to work. By the time the Legislature convened in January 1997, they had the plan Bullock wanted.

One of his last public appearances before his death was in April 1999 where he was guest of honor at the groundbreaking ceremony for the new Bob Bullock State History Museum in the Capitol complex. The Museum opened to the public in April 2001.

A bronze star sculpture fronts the 175,000 square foot four-story Museum built of the same pink granite as the Capitol. The Museum tells the "Story of Texas," from the first native American inhabitants to the Alamo, to statehood, the discovery of oil and the state's blast into its place as a space technology center. A Spirit of Texas theatre hosted by "Sam Houston" puts the audience in the middle of the wind and rain of a Galveston hurricane, the thunder of a stampeding herd and the eruption of a oil well gusher. It houses the only I-Max theater in Austin, a restaurant and a gift shop.

At the head of the staircase on the second level, a bronze larger-than-life statue of Bob Bullock, Texas' 38th Lieutenant Governor, looks out over the two-story glass entrance of the state history museum he always envisioned.