"The State Cemetery has me buried in a low spot down by the street," Bob Bullock once complained to a young staff attorney in the Lt. Governor's Office. "I'm going to be laying there in water while people drive by throwing beer cans on my grave." 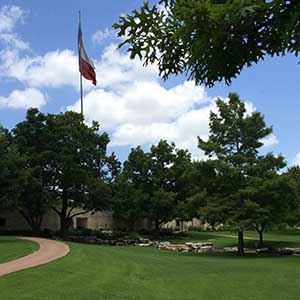 Bullock wasn't happy about the idea. He went to the Texas State Cemetery east of Interstate 35 in the heart of Austin each time one of his old friends was laid to rest there. He walked on cracked, uneven sidewalks past leaning headstones, overgrown bushes and rickety fences, all resulting from 40 years of neglect. That made him mad. When Bob Bullock got mad, he usually got busy.

He called on state engineers, landscapers and historians to restore the landmark and come up with a plan for perpetual care. Since the road through the cemetery already was designated a state highway, most funding for the renovation came from federal grants set aside for the restoration of historic landmarks. He installed longtime friend Harry Bradley as superintendent to oversee the project.

The 18 acres of shaded hills were donated by a Texas pioneer family for a State Cemetery with the first burial there in 1851. It's an elite burial spot, only for Texans elected to state office, appointed and confirmed to a state board, approved by the governor or a majority in both the Texas House and Senate. Governors, state officials, artists, historians and Texas veterans of the Civil War are buried there. And it was where Bullock planned to spend eternity.

Renovations began in 1994, and included the addition of a Visitor's Center, a picturesque pond, new walkways, scenic landscaping, improved roadways and a new State Cemetery marker. A new circular memorial of limestone pavers and bricks is etched with the words of some of Texas' most famous folks, and a flagpole with a Texas flag big enough to be seen from Interstate-35 was added.

"Some said I was raising hell to move heaven and earth," Bullock told a distinguished audience at the rededication of the State Cemetery in March 1997. He also told them "the State Cemetery is a memorial we must save for the future. Kids can go there and learn more about Texas history in one day than in a whole semester in class."

He was a regular visitor to the Cemetery with his own key to the iron gates, so he could check on the progress of the restoration any time day or night. Then in typical Bullock fashion, he changed his burial spot four times, some say depending on who might be the newest "neighbor" to his own plot. After Bullock left office in January 1999, he visited the Cemetery a few more times, commenting on the ongoing renovations, and picking out his own headstone and the words that would be engraved there.

Bradley remembers Bullock's last visit, days before his death. As he was leaving, Bullock, in the passenger seat of the car driven by his wife Jan, beckoned to him to lean in, whispering, "Take care of everything."

"I knew what he meant," says Harry.

And everything was taken care of, when, on Sunday, June 20, 1999, former Lt. Governor Bob Bullock was laid to rest on a hill in the shadow of the Stephen F. Austin memorial. Hundreds of family members, friends, supporters and state officials paid tribute to the man who spent 40 years in service to the state he loved. A large, red granite stone marks the grave today, but the beauty of the reborn State Cemetery is the true monument to Bob Bullock and his legacy to Texas.