Please note that Baylor University is currently monitoring the COVID-19 pandemic and all Spring 2020 campus activities and events have been canceled in an effort to maintain public health and safety. We thank you for your patience as we navigate implications for our previously scheduled programs and commitments. Details regarding the university's response and planning updates can be found here.

The Academy for Leadership Development brings national and international speakers to campus to introduce students to the diversity and complexity of leadership needs in contemporary society.  Presenters are asked to identify a pressing social issue and discuss how they have worked to address that issue in their community or share about their own personal leadership journeys - their obstacles as well as their successes.  The series is open to the public. 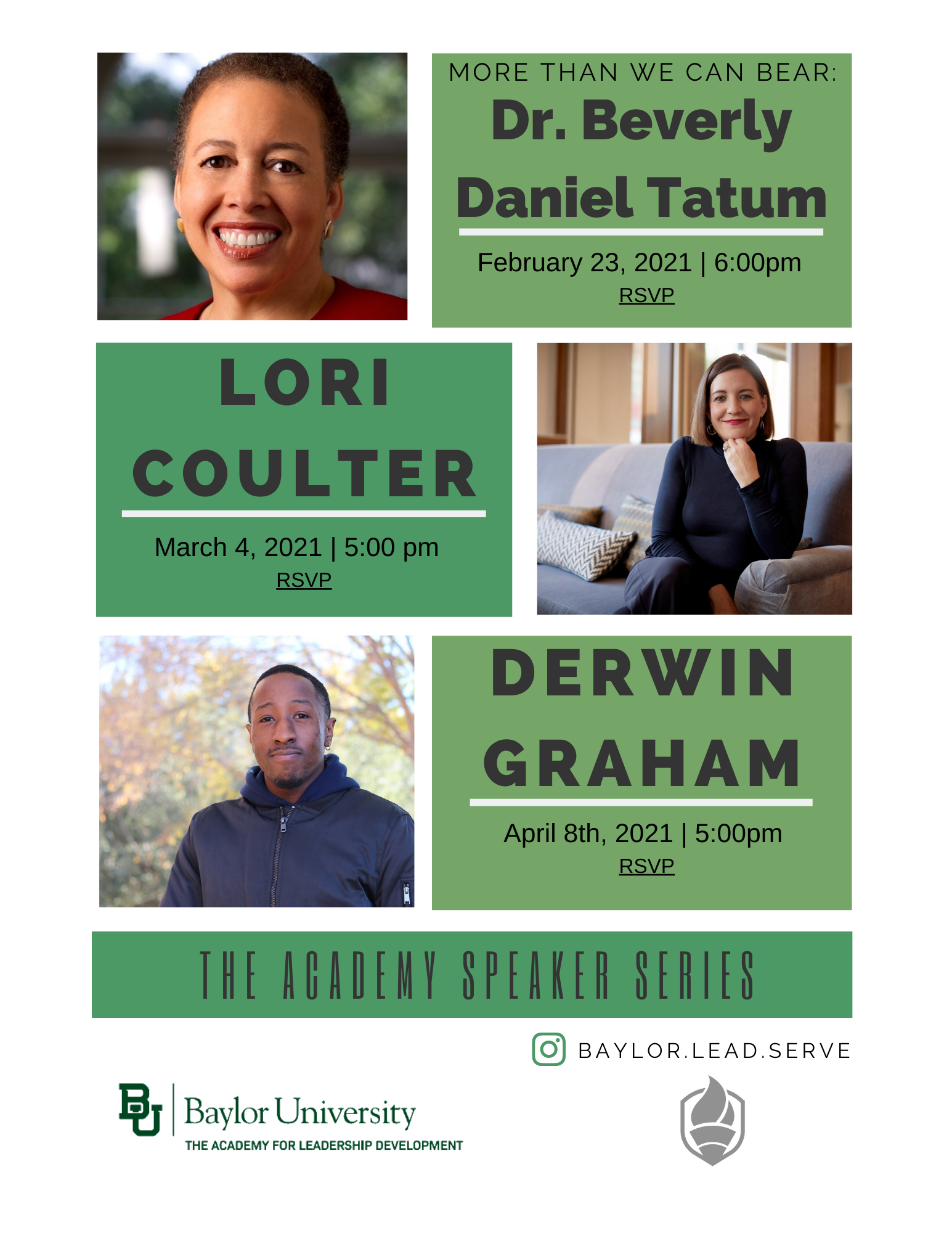 Derwin Graham is a 2015 graduate of Baylor University with a B.A. in Journalism, Public Relations, and New Media and a minor in Film and Digital Media. He is an award winning screenwriter in the feature length screenplay category and a recipient of the Award of Excellence at the 2018 BEA Festival of Media Arts in the feature length script writing category and the Best Original Screenplay at the 2018 National Black Film Festival. Derwin currently works in production on the ESPN Films and 30 for 30 team where he most recently worked on the Emmy award winning docuseries "The Last Dance".

Sherron Watkins Sherron Watkins is better known as the Enron whistleblower. She speaks around the globe to a broad range of audiences about ethics, flawed leadership, and the toxic label of whistleblower. Sherron was employed for over two decades as an executive for three large global companies, the accounting firm Arthur Andersen, Metallgesellschaft AG, the German metals giant, and Enron Corp. All were multi-billion dollar multinational companies brought down by scandal. Sherron has seen firsthand the cost of an erosion in values and her journey through the Enron crisis has inspired many, and has crystallized her focus to improve the lot of whistleblowers and would-be whistleblowers. Claire Diaz-Ortiz Author, speaker, innovation advisor and angel investor who was an early employee at Twitter.  Named one of the 100 Most Creative People in Business by Fast Company and called "The Woman Who Got the Pope on Twitter" by Wired.  She holds an MBA and other degrees from Standford and Oxford and has been featured widely in print and broadcast media.  She is the award-winning author of eight books that have been published in more than a dozen countries. Alexander Jun and Chris Collins Dr. Jun and Dr. Collins have coauthored two books related to racism and dominance; White Out: Understanding White Privilege and Dominance in the Modern Age (2017) and White Jesus: The Architecture of Racism in Religion and Education (2018). They have a third forthcoming book, White Evolution: The Constant Struggle for Racial Consciousness, that is planned to be released early 2020. Dr. Jun and Dr. Collins will talk about their book and discuss socially conscious leadership. More Than We Can Bear: Dr. Beverly Daniel Tatum

More Than We Can Bear (MTWCB) was created in 2010 after two former Baylor students, both African-American, died by suicide. More Than We Can Bear brings experts in the area of mental health to campus to engage the Baylor community in conversations about various topics related to mental health, creating positive change and fostering healing.  This forum is devoted to increasing awareness of mental health issues and implications for improving the mental health of people and communities of color. This year More Than We Can Bear is excited to host Dr. Beverly Daniel Tatum in a conversation focused on the effects of racism on the success of minority students, the true meaning of reconciliation, and how stories can be used to build bridges. The 2021 More Than We Can Bear is sponsored in collaboratio with the the Academy for Leadership Development, the Center for Global Engagement, the Department of Multicultural Affairs, the Diana R. Garland School of Social Work, and the School of Education.

Lori Coulter is the Co-Founder and CEO of Summersalt, the disruptive direct-to-consumer sustainable swimwear brand based in St. Louis. Named a Top 100 Female Founder for 2020, Lori and her Co-Founder Reshma Chattaram Chamberlin launched Summersalt to disrupt the women’s apparel industry with designer quality, size-inclusive and sustainable garments without the designer price tag. Named one of CNBC Top 100 Start-Ups in the World to Watch in 2019, CNN’s Top 15 DTC Brands, and The Lead’s Foremost 50 DTC Brands, Summersalt has seen overwhelming success in the three years since its launch, with additional praise from outlets like Forbes, Vogue, Elle and many more.