Assistant Dean of Student Affairs and Strategic Initiatives Stephen Rispoli has been named the 2023 Access to Justice Award recipient by the Association of American Law Schools. The award, presented by the Section on Pro Bono and Access to Justice, honors those who oversee pro bono programs at a member school, have worked to remove barriers to the justice system, and improved legal services to individuals unable to pay for such services. 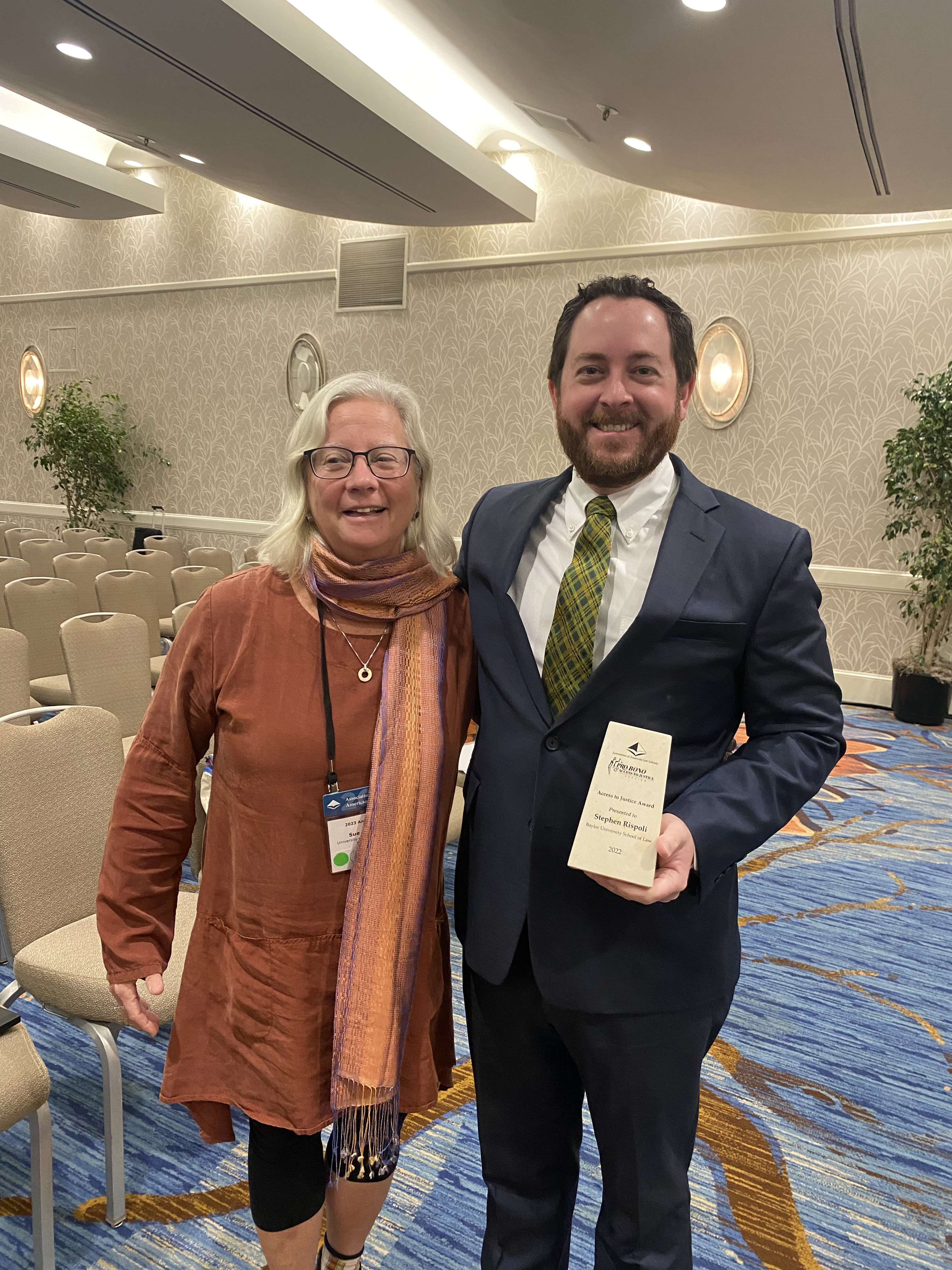 Dean Stephen Rispoli with Susan B. Schechter, University of California, Berkeley School of Law and member of the AALS Section on Pro Bono & Access to Justice Executive Committee.

Dean Rispoli received this Access to Justice Award for his tireless dedication to fostering a commitment to pro bono services among Baylor Law students. Rispoli developed and managed Baylor Law’s Pro Bono and Public Service Program for over a decade. Since the program’s inception, Baylor Law students have dedicated thousands of hours of volunteer and pro bono service while enrolled as full-time students. The pro bono work done by these students includes working in the Baylor Law Legal Clinics, serving as Court Appointed Special Advocates, analyzing evidence that contributed to convictions through the local Innocence Project, volunteering at the Advocacy Center for Crime Victims and Children, assisting on-campus with Baylor Law’s The People’s Law School and Adoption Day, and dozens of other services to Central Texas’s underserved communities.

“All of us at Baylor Law are proud of Stephen’s accomplishments and his drive to create an environment, both among our future Baylor Lawyers and the broader legal profession, where service and pro bono is emphasized,” stated Baylor Law Dean Brad Toben. “We are thrilled to see that others recognize his dedication and hard work as well.”

Dean Rispoli introduces access to justice issues with every incoming class through our Introduction to Law course. In the “Lawyer as Community Servant” session, Dean Rispoli leads a discussion on the civil justice problems that many Americans face and recent access to justice research. Dean Rispoli emphasizes the duty of lawyers to be problem solvers and advocates for justice in our society. He ends by encouraging the class to use their time, talent, and efforts to close the access to justice gap during their time in law school and the practice of law through pro bono service and leading systemic change.

“Our American justice system is very, very good at uncovering the truth and helping people get to a just result. But everyone deserves to be afforded that opportunity,” stated Stephen Rispoli as he accepted his award at the AALS Annual Meeting in January. “That’s why I feel called a push our current generation of law students to look for ways that they can positively impact the system and make it accessible to every American.”

Dean Rispoli is a past president of the Waco-McLennan County Young Lawyers Association (MCYLA). In 2015, under Dean Rispoli’s leadership, MCYLA launched the Pro Bono Challenge for all lawyers practicing in McLennan County, encouraging lawyers to meet the State Bar of Texas aspirational goal of 50 hours of pro bono service each year. Dean Rispoli served as the inaugural coordinator of this effort and the chair of the pro bono committee for three years

Dean Rispoli’s award is the 16th Award that Baylor Law has received for its commitment to service in the past decade. Other awards include the ABA’s Pro Bono Publico Award and the Law School Commitment to Service Award award from the Texas Access to Justice Commission at the AALS Annual Meeting in January.


ABOUT BAYLOR LAW
Established in 1857, Baylor University School of Law was one of the first law schools in Texas and one of the first west of the Mississippi River. Today, the school has more than 7,800 living alumni. It is accredited by the American Bar Association and is a member of the Association of American Law Schools. Baylor Law has a record of producing outstanding lawyers, many of whom decide upon a career in public service. The Law School boasts two governors, members or former members of the U.S. House of Representatives and the U.S. Senate, two former directors of the FBI, U.S. ambassadors, federal judges, justices of the Texas Supreme Court and members of the Texas Legislature, among its notable alumni. In its law specialties rankings, U.S. News & World Report ranked Baylor Law’s trial advocacy program as one of the top 5 in the nation. Baylor Law is also ranked in the top 50 in the magazine’s 2019 edition of "America’s Best Graduate Schools." The National Jurist ranks Baylor Law as one of the "Best School for Practical Training," and in the top 15 "Best Law School Facilities" in the country. The Business Insider places Baylor Law among the top 50 law schools in the nation. Baylor Law received the 2015 American Bar Association Pro Bono Publico Award, making it only the third law school in the nation to be honored with the award since the award's inception in 1984. Learn more at baylor.edu/law