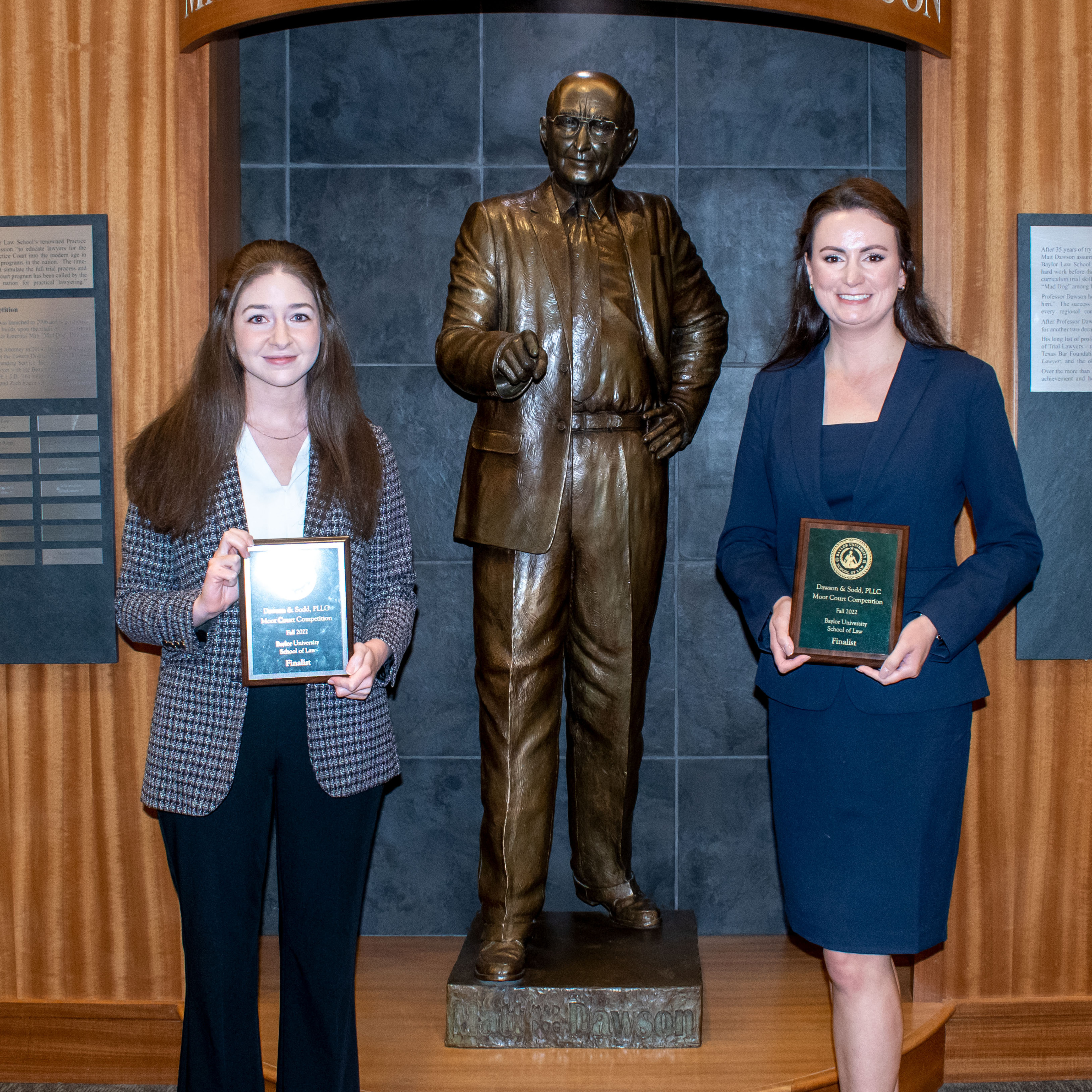 Runners-Up Danielle Hayes (R) and Tiffany Dunkin (L) After the Final Round of the 2022 Dawson and Sodd, PLLC Moot Court Competition

On Monday, Sept. 26, finalists in Baylor Law’s annual Dawson & Sodd, PLLC Moot Court Competition demonstrated their appellate advocacy skills before an audience of students, faculty, and staff in the Rex Huston Practice Court classroom of the Law Center. When the judges returned their decision, the team of Catherine McKinney and Maria Zermeno Simon edged out the team of Danielle Hayes and Tiffany Dunkin to take the top spot as winners of this year’s competition. The teams of Ashley Tran & Tayler Kennedy and Nick Gadowsky & Jack Vickery ended the competition as Semi-Finalists.


A Competition Weeks in the Making

On Friday, September 9, 20 two-person teams began the grueling fall contest, which simulates an argument before the Texas Supreme Court. Baylor law students enrolled in LARC 3: Persuasive Communications are required to participate in the moot court competition. Additionally, one team of upper-quarter students joined the competition voluntarily.

This year’s top ten speakers, by points awarded, were:

In addition, the Officers of the Harvey M. Richey Moot Court Society and LARC 3 professors selected upper-quarter student Drake Pew to receive a Professionalism Award for volunteering to pair with a LARC 3 student to make a full team of two. 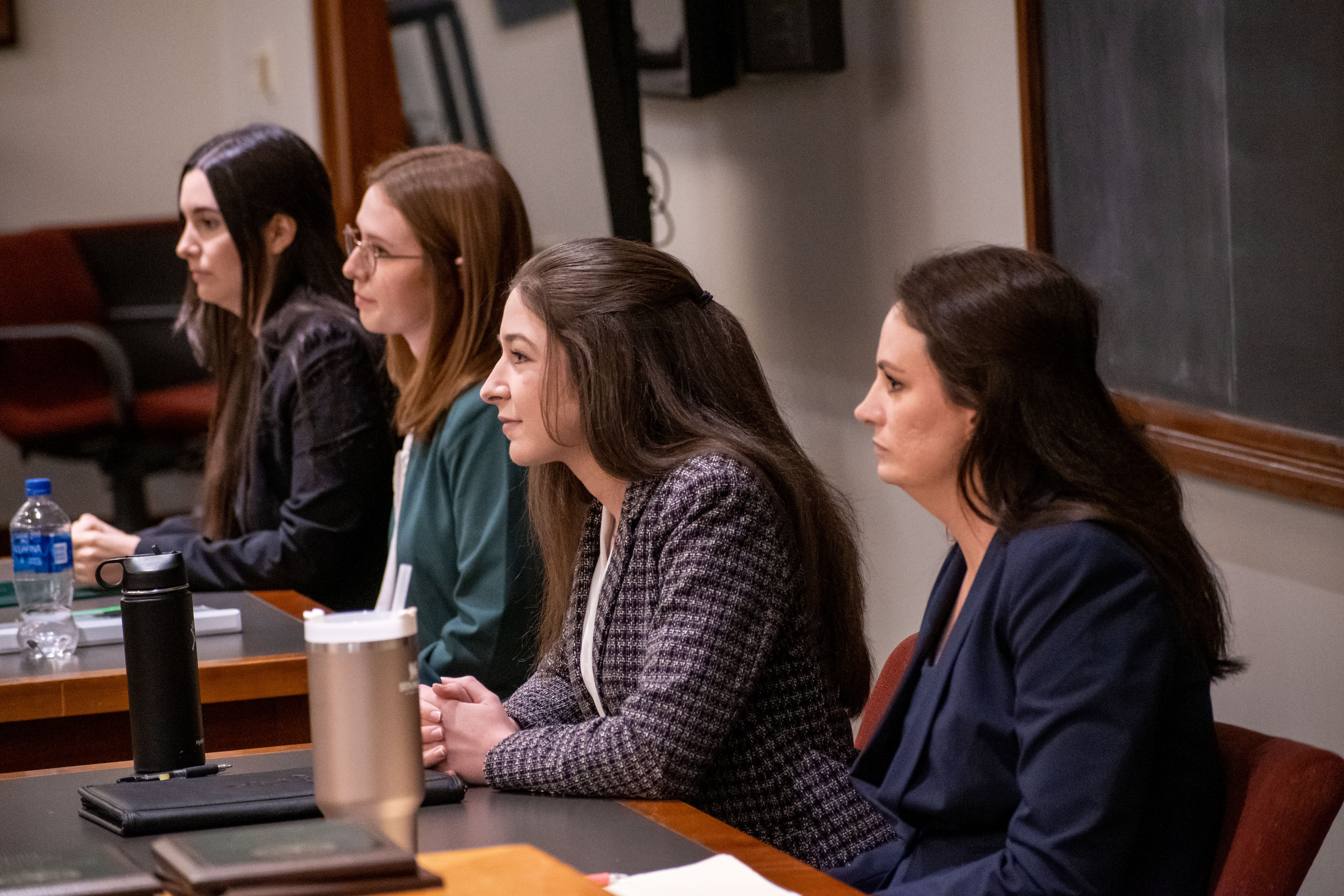 All Four Finalists Listen to Judges' Instructions During the Final Round of the Fall 2022 Dawson & Soddd, PLLC Moot Court Competition

After the competition ended, winner Maria Zermeno Simon remarked, “I am incredibly proud of the work, time, and dedication that my partner Cat and I put into the moot court competition. It was a tough competition. For me, this win goes beyond the title. My grandfather was an attorney in Mexico. He is an inspiration to me, and it meant everything that he and my family were able to watch me compete, via Baylor Law’s livestream.” Her partner Catherine McKinney added, “It was an incredible opportunity to have made it to the final round and have the chance to argue in front of our professors and friends. I had the best partner I could ask for and we put in a lot of time to do the best we could. I'm extremely proud of her and am hoping we both get the chance to continue in moot court and other advocacy teams here at Baylor.”

For the final round on Monday, September 24th, the judges panel consisted of Baylor Law faculty, including Professors Stephanie Tang, who served as the Chief Justice, Laura Hernandez, Jim Underwood, Greg White, and Chris Jaeger. The two student winners from this past spring’s competition, Jamie Mills and Lauren Leveno, also served on the final panel.

The Dawson & Sodd PLLC law firm of Corsicana generously sponsors this annual competition. The firm’s two founding partners were both graduates of Baylor Law. Matt “Mad Dog” Dawson (JD ’38) was a professor of Baylor Law’s renowned Practice Court program from 1971-1983. Glenn Sodd (JD ’72), a frequent speaker on eminent domain trial strategy, is a Fellow of the American College of Trial Lawyers and was named one of the 100 Best Trial Lawyers in America by Town & Country magazine.