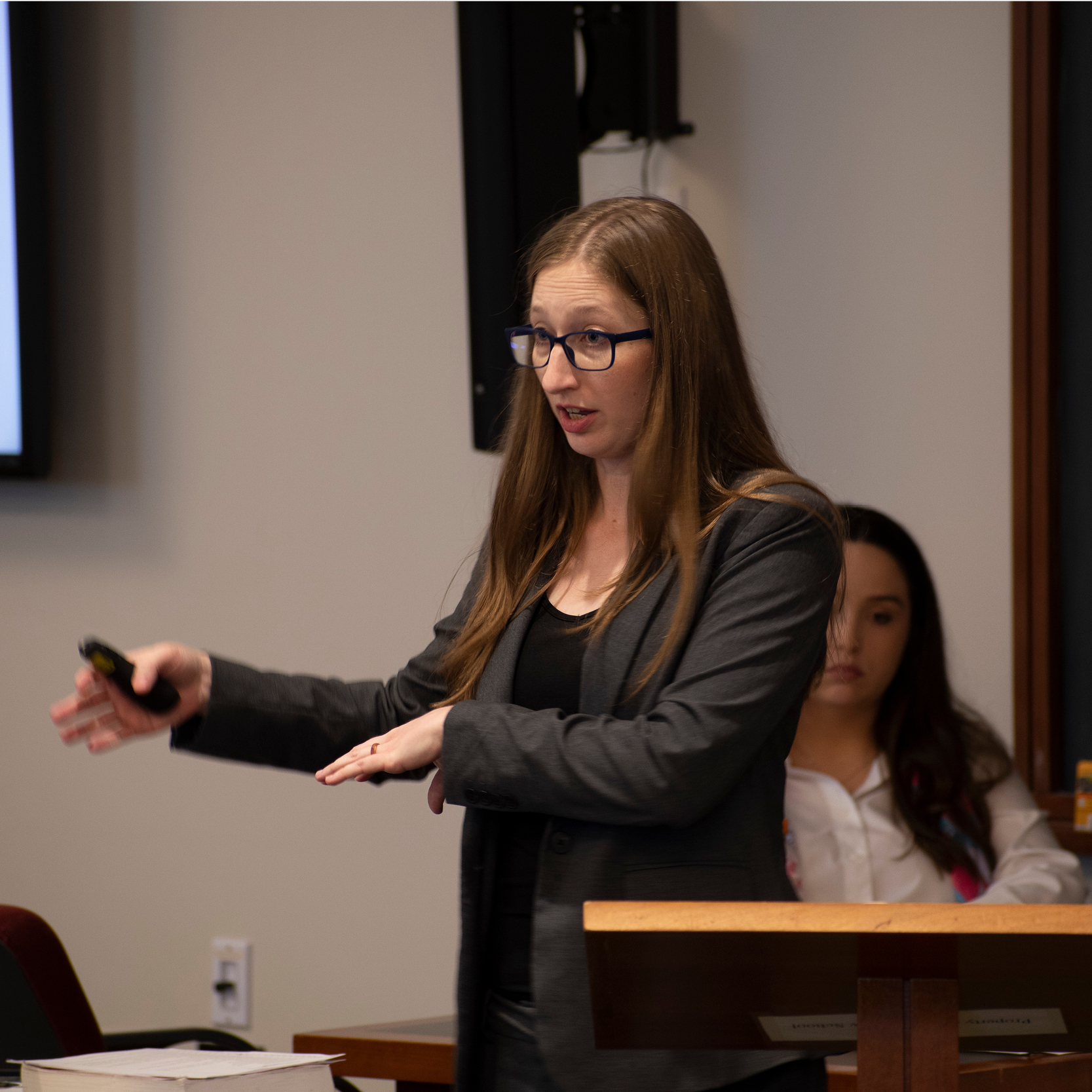 Summer 2022 Mad Dog Champion Rachel Rickel Makes a Point to the Jury on Friday, June 10, 2022, During the Final Round of the Summer Mad Dog Mock Trial Competition

“Baylor Lawyers are trained to thrive on competition, including the ‘One Riot, One Ranger’ mentality that the Mad Dog Competition instills,” noted Jim Wren, the Leon Jaworski Chair of Practice & Procedure at Baylor Law, “Our future ‘Best of the Best’ trial lawyers sign up for this opportunity.”

Unlike most other Practice Court advocacy exercises conducted in teams of two, the Mad Dog competition sees students facing off one-on-one until only the final “Mad Dog” Champion remains. The winner receives $4,000 and an 18-inch bronze maquette of the life-size statue of Dawson that stands guard near the Practice Court classroom on the second floor of the law center. The runner-up receives $1,500, and semifinalists receive $750 each. Baylor Law students are given a case file a mere 48 hours before the competition and then compete head-to-head in a single-elimination style tournament. The Summer 2022 Mad Dog competition was held from Tuesday, June 7, through Friday, June 10.

The presiding Judge for the final round was the Hon. Jack W. Jones, Jr, JD ’79, District Judge for the 146th District Court of Texas. Scoring judges for the final round were Kinsey Lakey, JD ’21, winner of the 2021 Bob and Karen Wortham “Mad Dog” Practice Court Competition; Matthew Maupin, JD ’22, winner of the Winter 2021 Mad Dog competition; and Hon. Jack W. Jones. 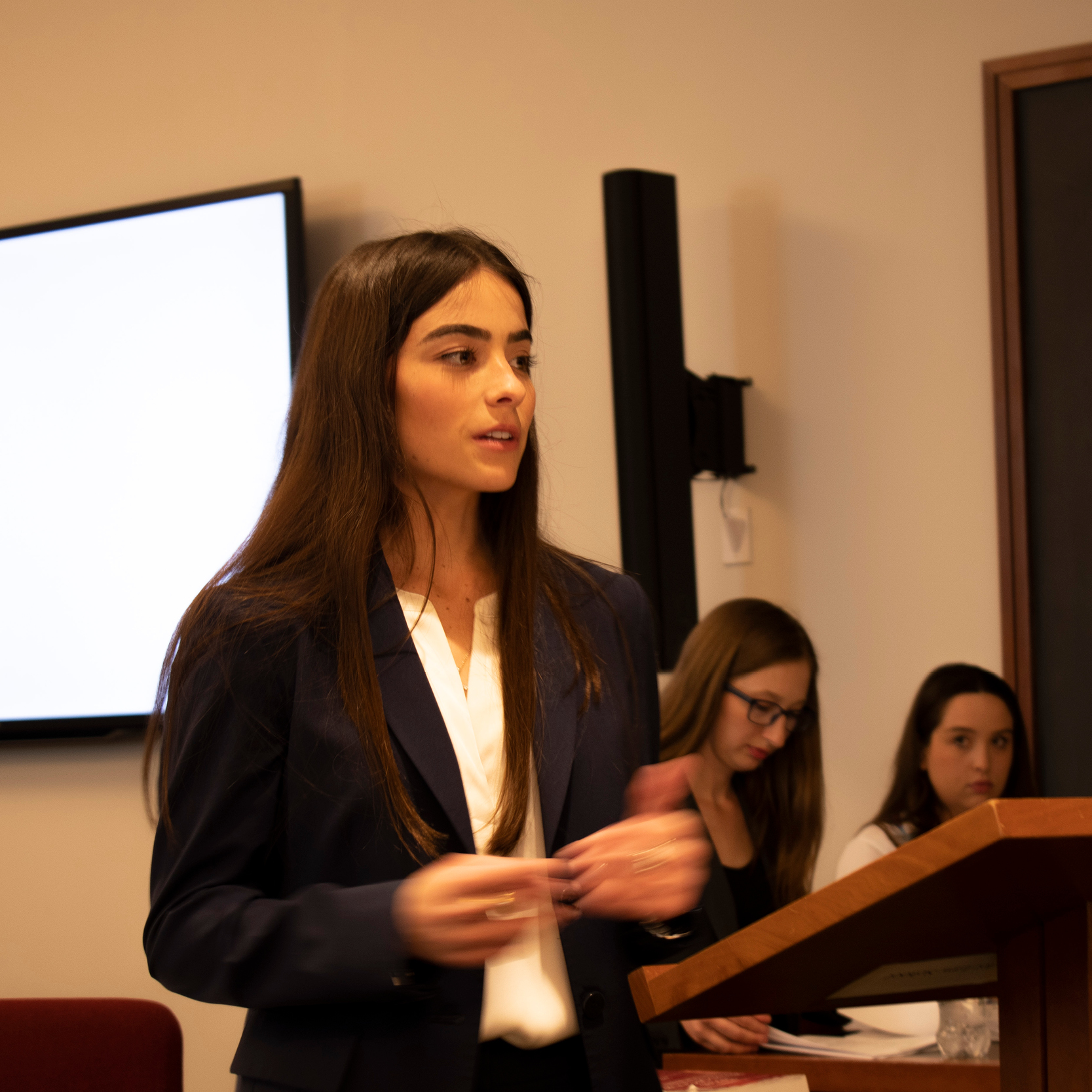 The Honorable Bob and Karen Wortham sponsor this annual competition. A Beaumont native, Bob Wortham (JD’ 74) earned a degree in Government in 1971 from Lamar State College of Technology and his JD from Baylor Law in 1974. Judge Wortham currently serves as the District Attorney for Jefferson County in Beaumont, TX, and previously served as the Judge of 58th District Court in Jefferson County from 2007 to 2014. He also served 12 years as US Attorney for the Eastern District of Texas before becoming a partner in the Reaud, Morgan, and Quinn law firm.

“Year after year, these wonderful friends of Baylor Law, Judge Bob and Karen, continue to support the advocacy training of future Baylor Lawyers,” stated a grateful Baylor Law Dean, Brad Toben. “Their continued support for the traditions of Baylor Law is what helps mold the success of our law students, and we are deeply grateful for their dedication.”


Murder on the Docket! Did a lawyer go too far in their disagreement with a judge?

During the opening rounds of the competition, Baylor Law students argued a criminal case in which the State of Lone Star asserts that Defendant Kelly Taylor murdered the Honorable Rob Cañas, a state district court judge. A previous trial resulted in a mistrial.

Chris Jensen, an investigator for the Bexar County District Attorney’s office, was assigned to investigate the death of Judge Cañas. Jensen testified that the body of Judge Cañas was found in Cañas’s chambers on Saturday, July 7, 2007, slumped in a chair. Blood was evident from a wound to the back of Cañas’s head, apparently caused by a large object. Jensen testified that fingerprint analysis revealed the fingerprints of Defendant Taylor on the item. Jensen testified that in the week before his death, Judge Cañas had tried a trademark infringement civil case involving Defendant Taylor as the plaintiff’s counsel. Jensen testified that the jury in the civil case had returned a verdict favoring Taylor’s client in the amount of $10,000,000 but that Cañas had granted a motion for judgment notwithstanding the verdict. In response, and on the record, Taylor stated that he would “burn” the Judge for that action.

Dr. Alex Slabin, a pathologist for Bexar County, Lone Star, testified that the Judge died due to an epidural hematoma caused by blunt force trauma to the back of the head. In Slabin’s opinion, a blunt object inflicted the trauma. Dr. Slabin did routine blood analysis during the autopsy, finding the presence of small quantities of a drug commonly known as Viagra. Dr. Slabin admitted to a previous affair with the Defendant.

In the prior trial, Kelly Taylor testified that Judge Cañas habitually skewed the court’s charge in intellectual property cases in such a way as to cause Taylor to lose such cases. Taylor explained his fingerprints on the trophy by stating that the opposing counsel in the civil case in question, one John Ward, had picked up the trophy during the charge conference and handed it to Taylor. Taylor offered no alibi witnesses, saying that the result of the trial was so depressing that he spent the evening drinking at home and going to a movie alone.

Dr. Dusty Stockard testified on behalf of Taylor. Dr. Stockard examined the autopsy results and performed additional testing on the remaining blood sample. Dr. Stockard swore that, in reasonable medical probability, Cañas’s death was caused by an unsafe drop in blood pressure brought about by the ingestion of large quantities of the drug Viagra, which was unwise given Cañas’s history of blood pressure and heart problems. According to Stockard’s testimony, although there was evidence of an epidural hematoma, the hematoma was not the cause of death. In Stockard’s opinion, the blow to the head was post-mortem.


A new twist for 2022: A dramatic curveball for the final round

Adding to the fierce competition of the Summer 2022 Mad Dog Competition, competitors Lexie Ammons and Rachel Rickel faced a curveball before the final round. A mere 16 hours before the match-up started, the students were handed notice that the final round case would become a civil case based on the same facts as the previous criminal case.

The final round was changed to a medical malpractice case in which Plaintiff Cori Harbour Cañas sued Dr. Jody Hammer for failing to warn her deceased husband, Rob Cañas, about the potentially dangerous interaction of certain medications taking.

Cori Harbour Cañas testified that she was married to Judge Rob Cañas, a sitting state court judge she described as her husband and closest friend. On June 6, 2008, Judge Cañas did not return to their home, but she was not concerned about that because he typically worked very late each Friday evening, waiting for juries to reach a verdict. When he had not returned by Saturday morning, she became worried and went to the courthouse to check on him. She found the courthouse and his chambers open and found him slumped in a chair. While she thought he might be asleep, she looked closer and determined he was, in fact, dead. Mrs. Cañas knew that the Judge had a heart condition for which he took nitroglycerin tablets as needed. He was so concerned about his heart condition that he quit jogging and, in fact, stopped all activities of a strenuous nature, including normal marital relations. Mrs. Cañas admits that she has been dating a lawyer named Kelly Taylor since the death of her husband. Taylor was, in fact, a defendant in a criminal case in which he was charged with the murder of Judge Cañas, but he was acquitted.

Dr. Andy Little is a medical doctor practicing in Armadillo, Lone Star, who has developed a sub-specialty to treat erectile dysfunction syndrome, or EDS. Mrs. Cañas hired Dr. Little to look into the death of her husband. Dr. Little has looked at the medical records from Dr. Jody Hammer’s clinic and the autopsy report, a toxicology result, and some literature on the medication known as Viagra. Dr. Little has formed an opinion that Judge Cañas died due to a drop in blood pressure caused by an interaction between this drug and the nitrates he took for a heart condition. Dr. Little opines that Dr. Hammer was professionally negligent in failing to warn Cañas of the potentially lethal combination of these medications. Hammer had sufficient information in a medical intake form to determine that Cañas was taking both of these medications.

Dr. Hammer has testified that Judge Cañas was seen in one of the clinics run by the doctor in Armadillo, Lone Star. Dr. Hammer can identify the intake form filled out by Cañas but does not specifically remember seeing the information on that form. It is, however, the doctor’s standard practice to look at all the information on an intake form. The information on the form would not have alarmed Dr. Hammer because the combination of Viagra and nitrates would not usually cause problems in normal dosage levels, even given the diagnosis of heart issues. Dr. Hammer has looked at the autopsy report and believes that the cause of the death of Cañas was blunt force trauma to the head.

Stevie Walker is an investigator for the Dallas County district attorney’s office. Walker was initially tasked with looking into the death of Judge Cañas as part of a criminal investigation. Based on Walker’s work, attorney Kelly Taylor was charged with murdering Judge Cañas. Walker has testified that the death of Judge Cañas resulted from blunt force trauma to the back of Judge Cañas’ head, caused by an ugly trophy the Judge kept in his office. In Walker’s opinion, Taylor killed the Judge because the Judge had just taken a $10,000,000 verdict away from Taylor after fashioning a jury charge designed to make Taylor lose the case. Walker will identify a copy of the draft of that charge with Taylor’s handwriting on the front, threatening to get even for the court’s action in drafting the charge.