The Winning Team from the University of Georgia School of Law, Following the Winner Announcement of Top Gun XIII.

After three grueling days of rigorous competition, Haley Kairab of the University of Georgia School of Law was declared the winner of Top Gun XIII, the thirteenth annual iteration of Baylor Law's intense National Mock Trial Competition. Over the course of three hours in the final round, Haley persuaded an all-star jury of experienced trial lawyers to return a verdict in her favor, narrowly beating out runner-up Regina Campbell of UCLA School of Law. In addition to bragging rights as the 2022 'Top Gun,' Haley takes home the grand prize of $10,000, which was generously provided by MG+M The Law Firm.

The ripped-from-the-headlines case focused on the creation and sale of digital assets, cryptocurrency, the blockchain, and non-fungible tokens (NFTs). The defendant, a young tech entrepreneur, named Kirby Seaborn, had promised to sell high-quality NFT trading cards of college sports figures using high-quality, animated artwork to raise $10 million from investors. However, when the actual NFTs were released, there was no animation, and the cards were not high-quality in any sense. 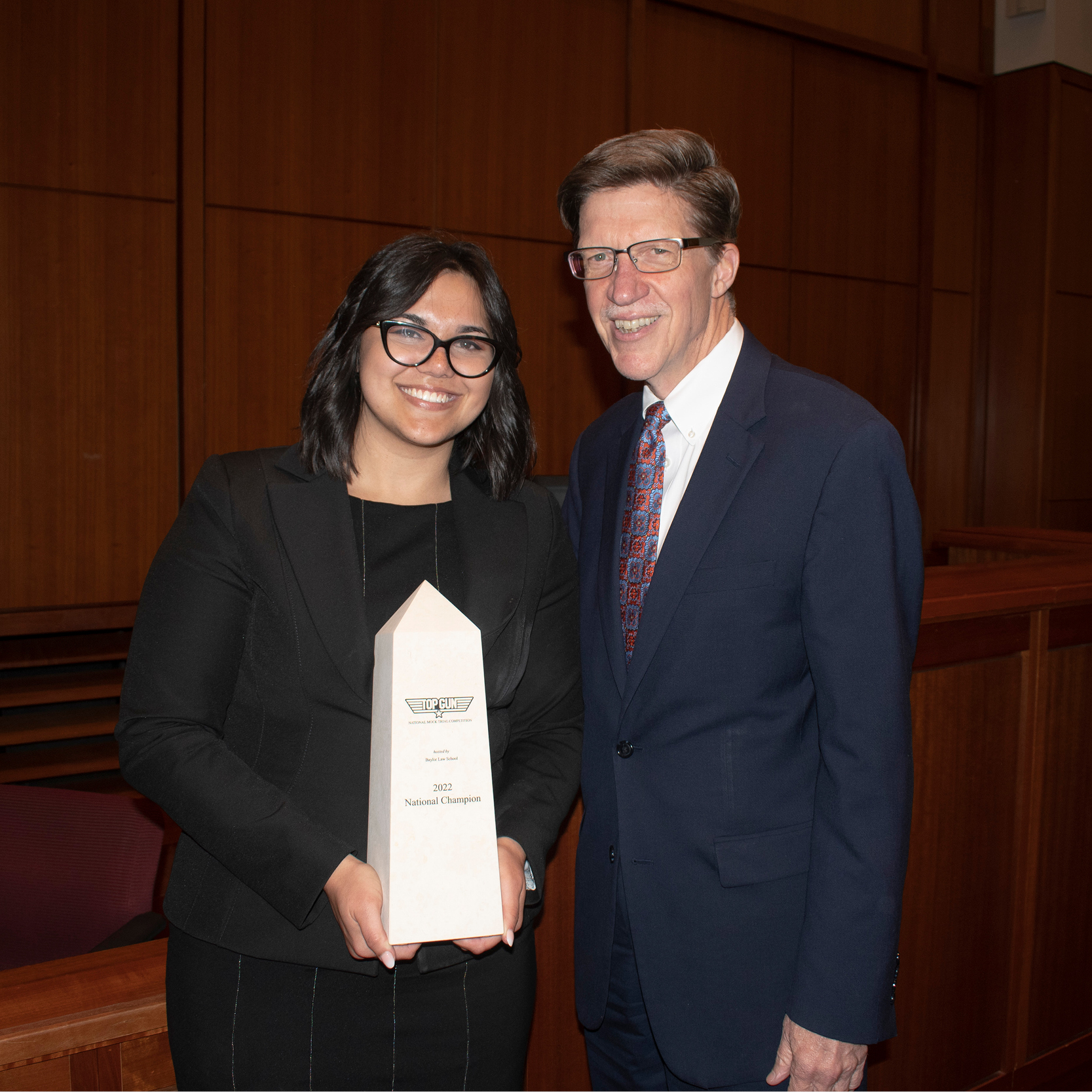 This year's problem, dealing with the world of NFTs, forced competitors to learn about complex and often confusing concepts quickly and to be able to clearly and concisely explain them to jurors that might have little to no understanding of the NFT market or even what an NFT is.

Baylor Law has, for years, prided itself on making Top Gun the most challenging mock trial competition in the country. And this year, the organizers tossed the competitors a curveball that made the competition more intense than ever.

The case was criminal during the preliminary rounds, and the young tech entrepreneur was charged with wire fraud. The jury was essentially asked to decide: was the defendant merely incompetent, or was this an organized scheme designed to defraud investors?

But for the semi-final and final rounds, the case changed dramatically. The formerly criminal case became a civil case where the plaintiff, Shae Bartlett, sued the defendant for fraud - alleging that the defendant intentionally misled the plaintiff with the high-quality, animated artwork, causing the plaintiff to invest tens of thousands of dollars into the defendant's fraudulent company.

"It feels surreal. This weekend I've gone against the best advocates I've ever seen. To be here at the end is surreal, and I'm really proud of myself," stated Haley Kairab after receiving word that she was chosen as the 2022 Top Gun. "I didn't expect it to be so fun. [The competition] forces you to figure out your limits, and I learned something new about myself this weekend."

Top Gun XIII marked a return to in-person competition after two years of online Top Gun competitions held via Zoom due to the pandemic. Robert Little, Baylor Law's Director of Advocacy Programs, was particularly pleased with having everyone back in Waco and on campus for Top Gun XIII. "Obviously, it was another great Top Gun and another great group of advocates from some of the best trial advocacy schools around the country," said Little, "but honestly, the best part was getting to see so many of the great student advocates and advocacy coaches from some of the best trial advocacy schools in the country compete in real courtrooms in front of real trial lawyers instead of staring into a computer screen. There is nothing that can replace the energy of having these competitors, their coaches, and our Baylor Law alumni on campus for Top Gun."

MG+M The Law Firm, a national litigation and trial-focused firm with over 100 trial-tested attorneys across its 13 offices, generously sponsored Top Gun XIII. Representatives from MG+M were on-site during the competition in June and witnessed first-hand the advocacy skills of this year's competitors.

"We were thrilled to have MG+M as a sponsor this year," said Little. "MG+M is a firm focused on trying cases all over the United States, and Top Gun is a showcase for the best student trial advocates in the country. This year, Top Gun brought the firm, those student advocates, and their coaches together in one place for a fantastic weekend of competition."

"This is the preeminent Mock Trial Competition, and Baylor has done a wonderful job. We're honored to be here and thrilled to win it," noted Haley's coach Joe Lester. "Haley's a rock star. The talent she shows here in the courtroom is exactly who she is as a person. She's a wonderful person, and I'm so proud of her."

During the final round, the Honorable Judge J. Rodney Gilstrap, United States District Judge for the Eastern District of Texas, served as the presiding judge. Serving on the jury as competition judges for the final round were Marilyn M Brown, Partner at Jackson Walker, Wayne Lindsey Robbins, Jr. of Robbins Travis PLLC, and Jenn Rustay, a retired partner at Hagans Burdine Montgomery Rustay PC.

This year's Top Gun competitors were:


In addition to winner Haley Kairab University of Georgia School of Law and finalist Regina Campbell of UCLA School of Law, the semi-finalists were Katherine Castener of Stetson University College of Law and Demitri Dawson from American University Washington College of Law. On Saturday evening, the Baylor advocacy team announced that the competitors had selected Aaron Freedman of Temple University Beasley School of Law to win the Professionalism Award for his demeanor and actions both inside and outside the courtroom.


In addition to winner Zoe Appler of Chicago-Kent College of Law and finalist Jenna Forster of the University of California Berkeley School of Law, the semi-finalists were Carolyn McGuigan of Fordham University Law School and Joy Holden of Harvard Law School.

ABOUT BAYLOR LAW
Established in 1857, Baylor University School of Law was one of the first law schools in Texas and one of the first west of the Mississippi River. Accredited by the American Bar Association and a member of the Association of American Law Schools, Baylor Law has more than 7,600 living alumni and a record of producing outstanding lawyers, many of whom decide upon a career in public service. The Law School boasts among its notable alumni two governors, members or former members of the U.S. House of Representatives and the U.S. Senate, two former directors of the FBI, U.S. ambassadors, federal judges, justices of the Texas Supreme Court, and members of the Texas Legislature. In its law specialties rankings, U.S. News & World Report ranks Baylor Law’s trial advocacy program as among the best in the nation at No. 2, while the Law School is ranked in the Top 50 of the 2021 edition of “Best Graduate Schools.” The National Jurist ranks Baylor Law as one of the “Best School for Practical Training,” and in the top 15 “Best Law School Facilities” in the country. The Business Insider places Baylor Law among the top 50 law schools in the nation. Baylor Law received the 2015 American Bar Association Pro Bono Publico Award, making it only the third law school in the nation to be honored with the award since the award’s inception in 1984. Learn more at baylor.edu/law