Baylor Law faculty member and Waco City Councilman Joshua G. Borderud (J.D.’ 09) received the 2020 American Inns of Court Sandra Day O’Connor Award for Professional Service at the Supreme Court of the United States in Washington, D.C. on Saturday, March 26th, 2022. The American Inns of Court presents the Sandra Day O’Connor Award to honor a member in the first ten years of practice for excellence in public interest or pro bono activities. After a two-year delay due to the pandemic, Chief Justice Collins J. Seitz, Jr. of the Supreme Court of Delaware presented Borderud with the award in the courtroom of the United States Supreme Court.

At Baylor Law, Borderud serves as the supervising attorney for the Veterans Clinic, the Trial Advocacy Clinic, and the Estate Planning Clinic.

“Professor Borderud embodies Baylor Law’s commitment to service and the values promoted by the American Inns of Court,” stated Baylor Law’s Dean Brad Toben. “As a student at Baylor Law, he was instrumental in creating the Baylor Public Interest Legal Society. In our clinics program, he selflessly serves those in need and cheerfully models and promotes a life of service to our students and others in the legal profession.” 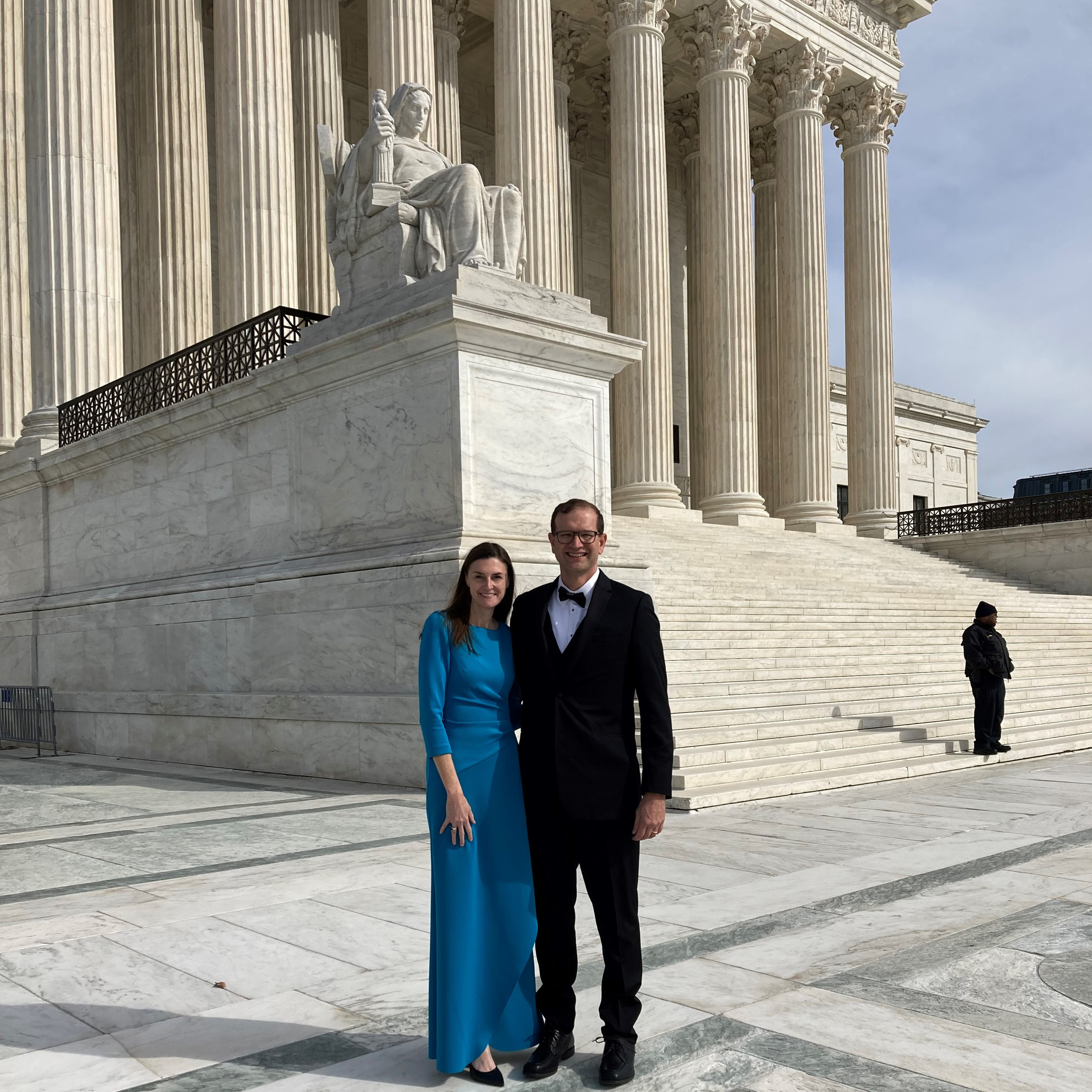 Josh and Jennifer Borderud at the Supreme Court of the United States on Saturday, March 26, 2022

“It is the honor of a lifetime to be recognized by the American Inns of Court. The work of mentoring law students in service to others is a joy. I am grateful to the American Inns of Court for validating the good work of our students who serve those in need through the Legal Clinics.” Borderud added, “A great deal of credit for this recognition should go to the Baylor Law administration, faculty, and staff for their enduring support of our clinical programs. I am profoundly grateful to Professor Bridget Fuselier and Professor Tom Featherston for their vision, commitment, and guidance, and to Judge Gary Coley and Judge Christopher Taylor for their ongoing partnership with our clinics. Finally, our work would not be possible without the continued support of the Texas Access to Justice Foundation.”

After graduating from Baylor Law in 2009, Borderud began his legal career as a prosecutor in Milam County, Texas. As an assistant district attorney, he prosecuted criminal cases and served as legal adviser to the county judge. He later joined the Waco law firm of Pakis, Giotes, Page & Burleson, P.C. as a civil litigator. While in private practice, he was named the Outstanding Young Lawyer of McLennan County.

In 2016, thanks to a Texas Access to Justice Foundation grant, Baylor Law hired Borderud as its first full-time clinic director. Under his leadership, the Veterans Clinic has been highly successful in serving the civil legal needs of Central Texas veterans. At monthly legal advice clinics, students, law school faculty and staff, and local lawyers partner to serve McLennan County’s population of over 16,000 military veterans, offering pro bono assistance to veterans and their spouses.

In addition to supporting veterans at the monthly clinics, in 2018, Borderud was instrumental in spearheading the creation of a Veterans Treatment Court in McLennan County that focuses on meeting the behavioral health needs of veterans, emphasizing rehabilitation over punishment.

In 2017, Borderud obtained a grant from the Cooper Foundation to establish the Trial Advocacy Clinic at Baylor Law. The clinic is a partnership with two local courts. Under direct supervision, law student advocates represent defendants who cannot afford counsel.

By appointment of Judge Gary Coley, Baylor Law students represent children at their initial juvenile detention hearings in the 74th District Court of McLennan County. Since the program’s inception, law students have appeared in over 400 juvenile hearings.

Borderud is a Fellow of the Texas Bar Foundation, a member of the State Bar of Texas Local Bar Services Committee, a Master of the Bench in the Judge Abner V. McCall American Inn of Court, and serves on the board of directors of the Waco-McLennan County Bar Association.

In addition to his clinical work and service to the legal community, Borderud has been active in civic affairs in the City of Waco. He serves on the Waco City Council and on the board of trustees of the Heart of Texas Behavioral Health Network, the local mental health authority for a six-county region.