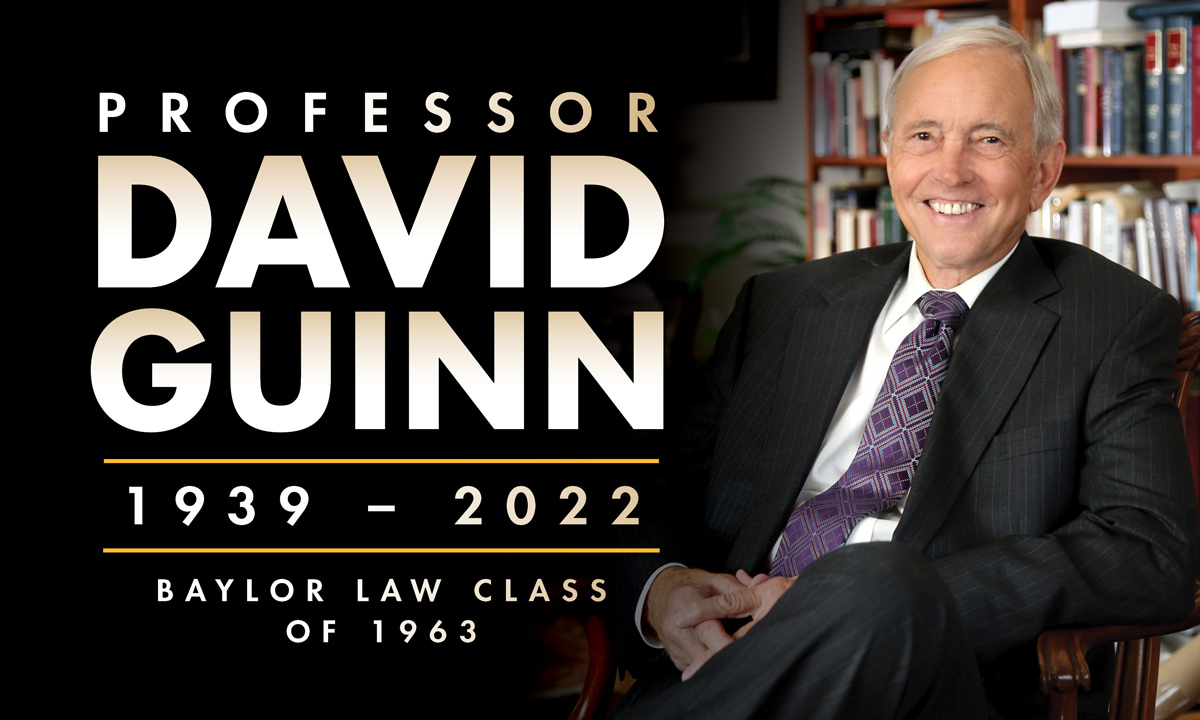 Baylor Law School mourns the loss of Master Teacher David Guinn, the retired Lyndon L. Olson and William A. Olson Professor of Local Government and Constitutional Law. Lovingly referred to as "the Godfather," Professor Guinn earned his nickname for his long tenure at the law school, but also for the wide influence he had on state policy and generations of Baylor Lawyers.

"David Guinn was a force of nature in the classroom and beyond. Blessed indeed was anyone who ever had the privilege of ever witnessing him speak, eloquently and with pointed passion, on the Constitutional foundations of our great nation," noted Dean Brad Toben. "David fought to explicate and defend the majesty of our Constitutional structure, liberties, and processes before thousands of Baylor Lawyers. His life’s work will stand as a testament to its sanctity as a bulwark of freedom and democracy."

Guinn taught Constitutional Law to thousands of aspiring Baylor Lawyers. He inherited a great appreciation of history from his father, a history teacher, coach, and Superintendent in Cleburne, Texas. His Constitutional Law courses connected law to American tradition with gripping stories of our shared past. Guinn infused each class with historical context to offer students a fuller understanding of landmark United States Supreme Court decisions and their impact on government, culture, and the practice of law.

Guinn first worked for the Jack Altaras firm in Cleburne, then the U.S. Securities and Exchange Commission in Fort Worth. He then worked for two years at the firm of Harris & Ball in Arlington. In the fall of 1965, he was admitted to the University of Michigan Law School, where he obtained his LL.M. in International Law in May of 1966. That same month he began teaching at Baylor Law School, where he would continue for 54 years until his retirement in 2020.

Guinn held a deep commitment to serving the bar and his community. He assisted in drafting the Texas Administrative Procedures Act and served on numerous advisory bodies in the State Bar and myriad committees at Baylor University. Guinn also served as Faculty Representative to the Southwest and the Big 12 athletic conferences from 1986-2001. In addition, he served on the first Division I Management Council of the National Collegiate Athletic Association in 1997 and continued to work with Baylor Athletics for many years after. Along with Professor Mike Morrison, for decades, Guinn played a key role in the redistricting process at the state and local level. Following the 2000 Census, the two Baylor professors redistricted 52 cities, counties, and school districts throughout Texas.

During his career at Baylor, Prof. Guinn initially taught many courses, including Criminal Law, Admiralty, International Law, Administrative Law, and Local Government, earning tenure in 1972. However, it was in the disciplines of Constitutional Law and Civil Rights that he made his mark and greatest contributions as a teacher. Respected and loved by the more than seven thousand Baylor Law students he taught, the University many years ago bestowed upon him the prestigious title of “Master Teacher.” In 2013, he was named Baylor Lawyer of The Year, the highest honor given by the Baylor Law Alumni Association.

His commitment to excellence in the classroom and dedication to students cultivated lasting relationships with Baylor Lawyers throughout the years. The many students Guinn inspired and encouraged during his fifty-year career at Baylor Law undoubtedly greet his passing with a keen sense of loss. He leaves a lasting legacy and will be deeply missed by the Baylor Law community.

Guinn is survived by two sons, David Jr., and John, each of whom graduated from Baylor Law School; and a daughter, Catherine, who is a graduate of Baylor University.


“A superb and singular teacher, lawyer, and person David was. His life enriched the lives of a legion.”