During the recognition dinner at Waco’s Ridgewood Country Club, Baylor Law’s Dean Brad Toben announced that, in addition to being named the 2021 Baylor Lawyer of the Year, an anonymous donor has established the “Gerald R. Powell Endowed Chair in Advocacy” at Baylor Law in honor of Prof. Powell’s legacy of teaching in the Practice Court program for thirty-five years, impacting the lives of thousands of Baylor Lawyers. 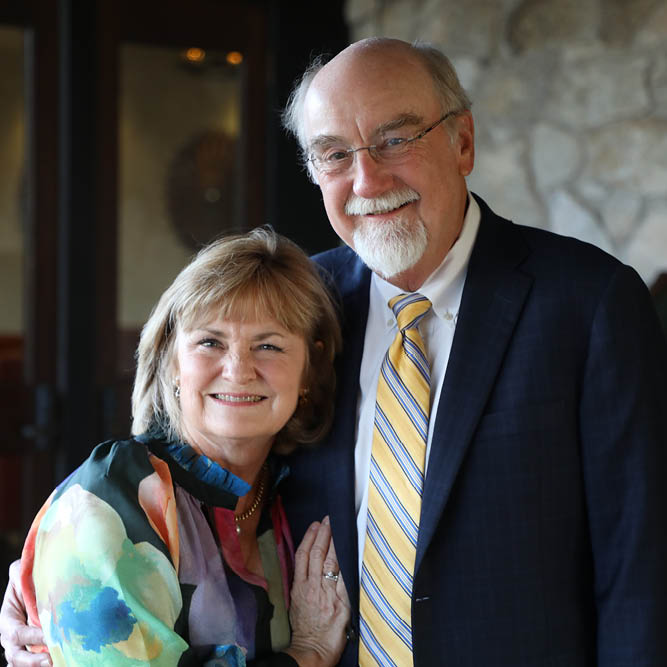 Powell served on the faculty for more than thirty-five years and, for more than 15 of those years, successfully dovetailed the unique and rigorous traditions of Baylor's Practice Court program with the realities of the 21st-century courtroom. In 2005 he received Baylor University's coveted Master Teacher designation-- the highest honor granted to Baylor faculty members. He was honored as the Mentor of the Year in 2020 by the Texas Young Lawyers Association and as Outstanding Mentor that same year by the Waco-McLennan County Young Lawyers Association.

Along with his teaching role, Powell has written and spoken extensively on evidence and trial advocacy topics and co-authored two books on Texas evidence, A Practical Guide to the Texas Rules of Civil Evidence and Texas Rules of Civil Evidence with Objections. Powell is an associate of the American Board of Trial Advocates (ABOTA), a professional association of experienced trial lawyers. He has served on the Administration of Rules of Evidence Committee for the State Bar of Texas and was appointed by the President of the State Bar of Texas to the Court Reorganization Task Force.

"Professor Jerry Powell is the quintessential Baylor Lawyer," said Dean Brad Toben. "Jerry truly is a 'Master Teacher,' as the University has designated him. He embodies the characteristics of a servant-leader and makes a lasting impression on his students, mentees, his colleagues, and professional peers. A masterful storyteller and powerful advocate, he is someone whom trial lawyers desire to emulate in knowledge, skill, and precision. Jerry has had an immeasurably positive impact upon Baylor Law, the central Texas community, and the entire legal profession."

Born and raised in Waco, TX, Powell graduated from Richfield High School and attended Baylor University. During his undergraduate days, he reigned as debate champion of the Southwest Conference and qualified for the national debate tournament. After graduating from Baylor, his affinity for advocacy drew him to Baylor Law. During his time as a student, he was a member of the National Mock Trial and Moot Court Teams and executive editor of the Baylor Law Review. He graduated first in his class, with honors, in 1977.

Following graduation, Powell joined the litigation section of the Dallas law firm of Vial, Hamilton, Koch & Knox, and made partner in 1982. In 1986, Powell returned home to Waco and joined the Baylor Law faculty.

Professor Powell has also been actively engaged in the Waco community. In addition to his teaching duties at the law school, Professor Powell has taught adult education classes to senior citizens, helped spearhead the Doris Miller Memorial on the banks of the Brazos River, and was an active leader in the Boy Scouts for many years. He served as a director of the Texas Ranger Hall of Fame & Museum Advisory Board and he originated the Baylor-Waco Civil War Round Table. His first fiction novel, The Sporting House Killing: A Gilded Age Legal Thriller, was released in April 2021.

Professor Powell and his wife Barbara are the parents of Colin, Baylor Law JD ’14, and Calley, a Baylor alumna.

On Powell's last day of serving on the Baylor Law faculty, he delivered the commencement address at the request of the summer 2021 graduates. He shared with the graduates, "We are all going out together. Whatever mark we were going to make at Baylor Law, we made it. Time to go mark up something else. Let’s go make the world a better place. Go solve people’s problems. Make your communities safer and stronger. Do everything you can to preserve and protect the rule of law. It has never been so at peril as it is today. I know you can do it, and I am counting on you."


About the Baylor Lawyer of the Year Award

Baylor Law will accept nominations for the 2022 Baylor Lawyer of the Year through December 1, 2021. The Executive Committee of the Baylor Law Alumni Association will review all materials received for each nominee.

To submit a nomination for the 2022 Baylor Lawyer of the Year, please send a nomination letter describing why the nominee meets the below criteria to:

ABOUT BAYLOR LAW
Established in 1857, Baylor Law was one of the first law schools in Texas and one of the first west of the Mississippi River. Today, the school has more than 7,800 living alumni. Accredited by the American Bar Association and a member of the Association of American Law Schools, Baylor Law has a record of producing outstanding lawyers, many of whom decide upon a career in public service. Baylor Law boasts among its notable alumni two governors, members or former members of the U.S. House of Representatives and the U.S. Senate, two former directors of the FBI, U.S. ambassadors, federal judges, justices of the Texas Supreme Court and members of the Texas Legislature. In its law specialties rankings, U.S. News & World Report ranked Baylor Law’s trial advocacy program as among the best in the nation at No. 2. Baylor Law School also is ranked No. 48 in the magazine’s 2020 edition of “America’s Best Graduate Schools.” The National Jurist ranks Baylor Law as one of the “Best School for Practical Training” and No. 4 in the nation in its most recent “Best Law School Facilities” listing. Business Insider places Baylor Law among the top 50 law schools in the nation. Baylor Law School received the 2015 American Bar Association Pro Bono Publico Award, making it only the third law school in the nation to be honored with the award since its inception in 1984. Learn more at baylor.edu/law