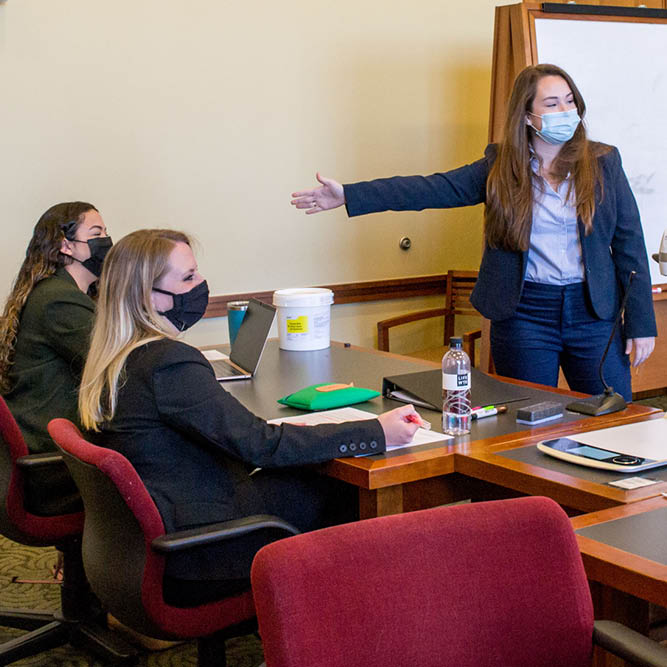 Professor Alpert has trained thousands of lawyers, judges, expert witnesses, and others on the intricacies of successfully prosecuting and defending criminal cases. During the Criminal Law Boot Camp, students took a practical dive into how the criminal court system operates in Texas including jury selection, punishment evidence, and how to construct and deliver an effective guilt/innocence closing argument. Students also learned about ethical issues related to criminal practice from both the state and the defense perspectives.

The fictitious case used during the bootcamp was based on those found in an actual criminal case in Texas. Glenn Cobb, a 55-year-old pipefitter with a possible intellectual disability is accused of shooting a homeless drug addict after a violent altercation outside of a convenience store. The case itself has nuances and plot twists befitting a storyline from a procedural TV drama- including competing media narratives from two separate news outlets.

Students learned from the combined experience of a dozen current and retired prosecutors, criminal defense lawyers, and judges, including:

“This Bootcamp has been the highlight of my Baylor law experience thus far,” stated law student Tristan Crowder, “There is so much value in getting students to speak and to argue in front of their peers. If you're at all interested in criminal law, this Bootcamp is for you," he added. Fellow student Jean-Marie Anderson echoed Crowders thoughts and added, “Getting to learn from such seasoned and successful criminal law practitioners was invaluable, and it is an experience I will never forget. Not only was it an incredible learning experience, but also a fantastic networking opportunity. I’m so grateful to have had this opportunity, and I can’t wait to apply everything I’ve learned from the faculty in my own career.”