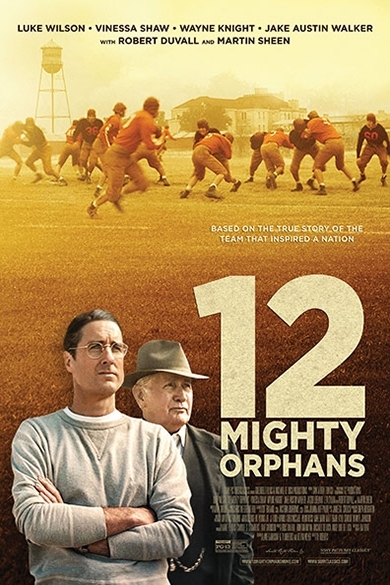 The movie “12 Mighty Orphans,” which premiered in limited release on June 11th and currently sports a 96% RottenTomatoes Audience Score, tells the true story of the Mighty Mites, the Depression-era football teams from the Masonic Home and School of Texas. The Masonic Home was founded in Ft. Worth in 1889 to serve the orphans (and originally the widows) of Masons and remained open until 1995. The film stars Dallas native Luke Wilson as football Coach Rusty Russell and is based upon Jim Dent's 2007 bestseller "Twelve Mighty Orphans: The Inspiring True Story of the Mighty Mites Who Ruled Texas Football."

This inspiring true story is of particular interest to those associated with Baylor University and Baylor Law. Judge Abner Vernon McCall, who served as the Dean of the law school for eleven years beginning in 1948 (interrupted by a short assignment as an associate judge of the Supreme Court of Texas) and who later served as the 10th president of Baylor University, was one of the Mighty Mites.

McCall, his two brothers, and a sister were placed in the Masonic Home and School in 1919 following the death of their father in the flu epidemic of 1918-1919. Their mother was too ill to maintain their Jack County farm northwest of Fort Worth, and she and the children were close to starving. Because Harry McCall, Judge McCall’s father, had been a Mason, the four siblings were taken in by the Masonic Home.

During the Depression, Texas football became an even greater source of entertainment, and the teams from the Masonic Home had a special underdog appeal. In 1927, Coach H. N. “Rusty” Russell arrived to begin his 16-year career at the Home. He started a football program, coaching a team with no uniforms, no pads, six helmets, not enough shoes to go around, and not even a football (they used a Clabber Girl baking powder can as a substitute). Under Russell’s innovative coaching and inspiring leadership, the team with such colorful player nicknames as Wheatie, Snoggs, Spec, Donkey, Crazy, Fats, Wink, Brownie, Sleepy, and Hootie won the Class B state title in 1931.

In his eulogy for Russell in 1983, Judge McCall cited a Dallas Morning News writer who called him an offensive genius in football and wrote “Many sportswriters over the years noted the innovations he brought to football offense and ranked him among the great coaches of the 1900s.” Russell drove his teams to games in “Old Blue,” a smoke-belching flatbed truck, and thousands of fans converged at every venue to see the Mighty Mites play. In 1932, the last year that Judge McCall and his brother Scott played for the Mighty Mites, the team from the Home (enrollment about 100 and a team of 12) competed in the Class A high school state championship game against Corsicana, a school with an enrollment of roughly 1,000 students and a team of 44. Scott McCall was the quarterback, and Abner was the substitute. Apparently, Judge McCall was more scholastically than athletically talented. He described himself as a “115-pound skinny, awkward boy not particularly quick, fast, or strong.” The crowd in Corsicana was estimated at between twelve and twenty-eight thousand, and the play at one point had to be stopped for almost an hour while fans were cleared from the field. The orphans, outweighed by at least thirty pounds per man, fought to a scoreless tie, and Corsicana was awarded the victory based on five ‘20-yard penetrations’ to one. It would be remembered as one of the craziest and most entertaining games in the history of Texas high school football. Under current high school football rules, the game would be considered a tie, and the Mighty Mites co-State Champions.

In his 16 seasons as coach at the Masonic Home, Rusty Russell led the Mites to the state playoffs ten times and to the Class A state semifinals four times. He had coached the team to a Class B title in 1931. The team of 1940-41 was undefeated and untied. They played three-time state champion Amarillo High School in the 1940 state championship game. After being stopped on the one yard line as time ran out, the Mighty Mites lost, 14-7. The orphans built a record of 127-30-12 under Coach Russell and his “sidekick,” Dr. E.P. Hall, played by Martin Sheen in the movie, a Ft. Worth physician who cared for the boys and girls of the Home, for free, for 45 years.

Russell stayed at the Home until 1942 when he accepted the coaching job at Highland Park High School. He then coached seven seasons at SMU and was installed in the Texas Sports Hall of Fame in 1981. But Coach Russell’s impact was only partly due to his football prowess. In his eulogy, McCall noted that “the genius of Rusty Russell was in his ability to make every boy a giant in his own eyes… because of Coach Russell, all my life I have carried with me the philosophy that I could confront and conquer any problem which came my way. We have all gone through life with more courage and confidence and achieved more and been better persons than we would have otherwise been except for Mr. Russell [...] the reason I loved him was because he made me believe in myself.” Throughout his life, Judge McCall felt indebted to Coach Russell and to the Masons who provided a home for himself and his siblings. He was a Scottish Rite Mason until his death, and had been awarded the 33rd degree, the highest honor Masons bestow. At his high school graduation in 1933, Wallace Hughston, Most Worshipful Grand Master of the Grand Lodge of Texas, addressed the graduates and explained that their debt to the Masons for raising them “was not to be paid in gold or silver, but by a well-lived, noble, and loyal life, lived for the betterment of his or her community.” Judge McCall’s life paid his debt in full.