Kathryn Snapka, Baylor Lawyer and Jaworski Fellow, Honored as Trial Lawyer of the Year by TEX-ABOTA

Kathryn Snapka, Baylor Lawyer and Jaworski Fellow,
Honored as Trial Lawyer of the Year by TEX-ABOTA 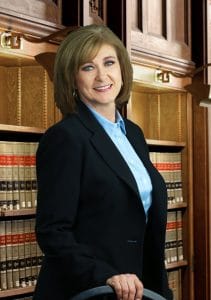 The Texas Chapters of the American Board of Trial Advocates (TEX-ABOTA) has selected Baylor Lawyer and Jaworski Fellow Kathryn Snapka (JD ’80) as the 2021 Trial Lawyer of the Year. Snapka will receive her award on Saturday, October 30th at the TEX-ABOTA Annual Dinner in Santa Fe. TEX-ABOTA chapters from across the state of Texas submit nominations for this prestigious annual award. Snapka was nominated by the Corpus Christi chapter.

“Kathy is a powerhouse in every sense of the word,” asserted Dean Brad Toben. He added, “she is a sought-after speaker on trial advocacy issues and a fierce advocate for her clients. Our students are blessed by having her as one of our Jaworski Fellows, a group of high-profile trial lawyers who bring their instruction and wisdom to our students as the students experience our singular Practice Court program. This honor is well-deserved and hard-earned.”

After graduating from Baylor Law in 1980, Snapka was admitted to the State Bar of Texas in 1981. After law school, she served as a briefing attorney for the Court of Civil Appeals for the Sixth Supreme Judicial District in Texarkana.

Snapka is a committed Jaworski Fellow at Baylor Law. The Jaworski Fellows program taps some of the most accomplished, seasoned trial lawyers and judges to critique student advocacy exercises and offer future Baylor Lawyers unparalleled personalized assessments and feedback during the second quarter of Baylor Law’s unrivaled Practice Court Program.

ABOTA is a national association of experienced trial lawyers and judges, with more than 6,300 members spread among 93 chapters in all 50 states and the District of Columbia. TEX-ABOTA consists of more than 1,000 members in 13 chapters across the state.