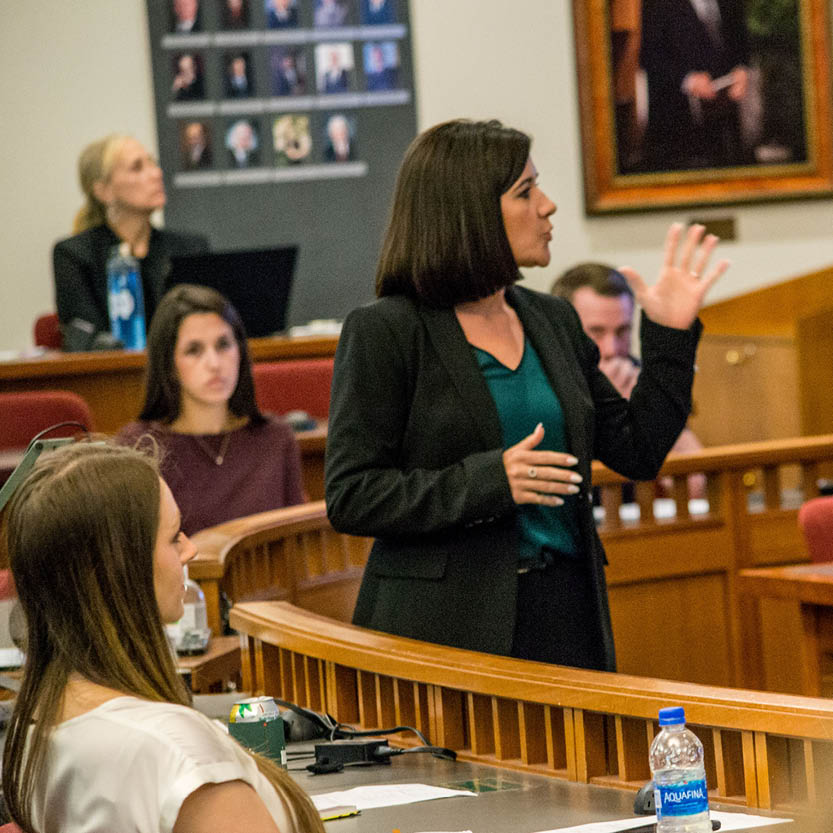 As part of Baylor Law's intense Practice Court Program, students participate in the Bob and Karen Wortham “Mad Dog” Practice Court Competition, a week-long contest that occurs at the beginning of the second quarter of Practice Court. Unlike the other Practice Court advocacy exercises that are conducted in teams of two, the Mad Dog competition pits student-against-student to find the one with the best courtroom skills. The winner receives $3,000, in addition to an 18-inch bronze statuette of Matt “Mad Dog” Dawson, the legendary Baylor Law professor who started the tradition of mini-trial competitions during his tenure as director of Baylor Law's Practice Court Program. The runner-up receives $1,000, and semifinalists receive $500 each. Baylor Law students are given a case file a mere 48 hours before the competition and then compete head-to-head in a single-elimination style tournament. This year's spring 2021 Mad Dog competition was held Monday, June 7 through Friday, June 11.

The scoring judges for the final round were Jessie Cox (JD ’21), winner of the winter edition of the Mad Dog competition in 2020; Robert Little, Director of Advocacy Programs and Baylor Law; local attorney & President of the Texas Young Lawyers Association, Jeanine Rispoli (JD '11), and local attorney Jason Milam (JD ’13) 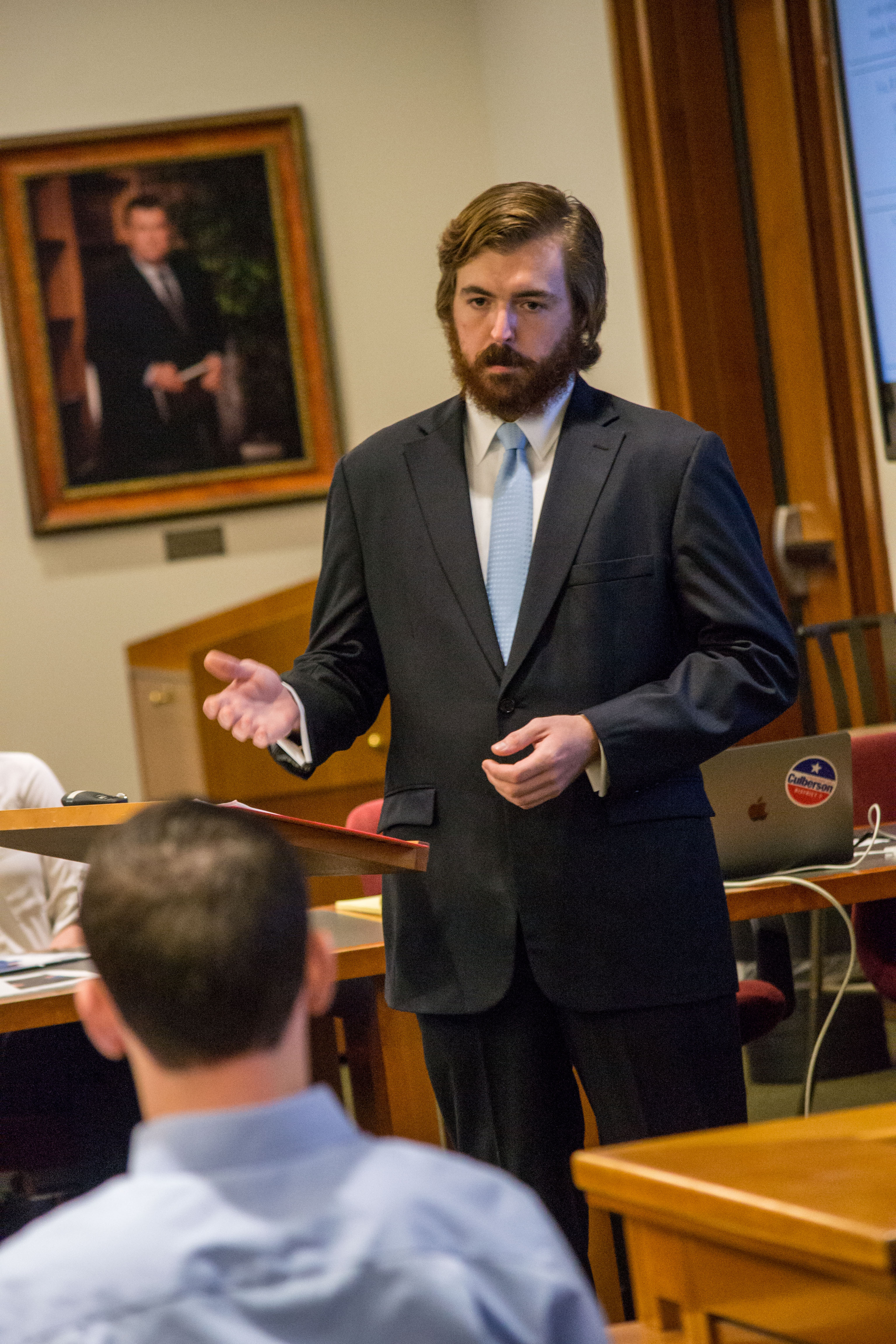 The Honorable Bob and Karen Wortham sponsor this annual competition A Beaumont native, Bob Wortham (JD ’74) earned a degree in Government in 1971 from Lamar State College of Technology, and his J.D. from Baylor Law in 1974. Judge Wortham currently serves as the District Attorney for Jefferson County, in Beaumont, TX, and previously served as the judge of 58th District Court in Jefferson County from 2007 to 2014. He also served 12 years as U.S. Attorney for the Eastern District of Texas before becoming a partner in the Reaud, Morgan and Quinn law firm.

"Judge Bob and Karen Wortham’s continued generous support of the Mad Dog competition makes possible this learning experience for our students. They are wonderful friends of Baylor Law and their long-term support of this challenging competition provides our students a truly unique learning opportunity,” stated a grateful Baylor Law Dean, Brad Toben.


Nuts! When a Free Sample and a Peanut Allergy Collide,
Who's Responsible?
The Child's Parents or the Grocery Store?


In this spring’s ‘Mad Dog’ competition, students were faced with a case involving a child's peanut allergy, a parent's obligation to protect their child, and the duty of a grocery store to protect its customers. In July 2019, Sam Fuller entered the Defendant's grocery store, CostLow Grocery, along with his parents, Jordan Fuller and Drew Fuller. They were at the store to pick up supplies for a fourth of July barbecue they were planning on hosting the following day. Sam Fuller was born with asthma and a peanut allergy, which his parents became aware of by the time he was two years old after he broke out in hives when he was baking peanut butter cookies with his Aunt. Mr. and Mrs. Fuller were aware but did not know the severity of Sam's allergy. While they were on their way to get those cups and plates, Jordan and Sam passed a sample stand in the store, displaying samples of gluten-free protein bars. There was no packaging on display on the sample stand, no list of ingredients available to be viewed, and no signs on or around the sample stand warning that those samples contained a food allergen. However, these protein bars contained peanut flour, a derivative of peanuts, a common and known food allergen.

Unaware of the ingredients, Jordan Fuller and Sam Fuller took a sample and met back up with the rest of the family. Soon after that, Sam started to complain there were peanuts potentially in the sample. Jordan returned to the sample stand only to discover the packaging listed peanut flour. Within the next couple of hours upon returning home, Sam began to breathe heavily. He progressively became worse, and despite using Sam's prescribed EpiPen, Sam Fuller stopped breathing. After calling 911, administering CPR, and a trip to the hospital resulting in Sam's heart stopping, a five-day stay in the hospital, Sam Fuller survived. The Plaintiffs, the Fuller family, have sued the Defendant, CostLow Grocery, for failing to warn and protect their customers properly. However, CostLow Grocery had policies in place, sample stand protocols, and warning signs to put up any time samples contained known food allergens. This case all centers around a sign – and whether or not there were warning signs properly displayed and given the day Sam Fuller had his allergic reaction. Whether it is on the grocery store or the parent to protect Sam Fuller.


Special Thanks to the Final Round Volunteer Judges