Zoe Appler of Chicago-Kent College of Law Makes A Point Before Presiding Judge K. Nicole Mitchell, U.S. Magistrate Judge of the United States District Court for the Eastern District of Texas During the Final Round of the 12th Annual Top Gun National Mock Trial Competition

Zoe Appler of Chicago-Kent College of Law was crowned the winner of Baylor Law’s 2021 edition of the Top Gun National Mock Trial Competition. Appler successfully convinced a jury comprised of experienced litigators and judges to return a verdict in her favor at the end of the competition's intense final round - narrowly defeating Jenna Forster of the University of California Berkeley School of Law. Appler received the $10,000 prize and rightfully earned the title "Top Gun."

“I have wanted to participate in Top Gun since I first found out about the competition as a young, undergraduate competitor at American University. Five years ago, I never could have imagined putting together an entire case in 12 hours. The level of dedication and perseverance that this competition demands is unparalleled,” asserted the 2021 Top Gun winner Zoe Appler. “It was an honor to compete against so many experienced, well-rounded advocates in every round, but the final round was definitely the most special to me,” she added. Appler’s coach, retired justice of the Illinois Appellate Court, First District, David A. Erickson noted, “In the twelve years the Top Gun competition has been going, I have watched, coached, and even judged in ten of them. In that time, it has become the preeminent test for the best trial advocacy students in the country to test their skills against each other. It has been my privilege to be a part of the legacy and I thank the Baylor family for that.” 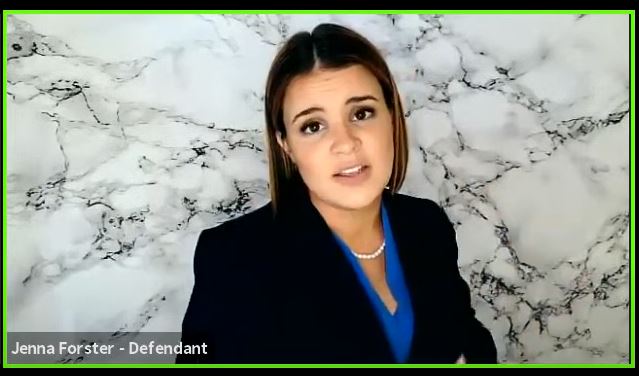 In a unique twist of fate, Winner Zoe Appler and finalist Jenna Forster were teammates as undergraduate mock trial competitors at American University.

Top Gun is the brainchild of Gerald Powell, the recently retired Abner V. McCall Professor of Evidence at Baylor Law. "Year after year, Baylor Law’s Top Gun Competition provides a forum that challenges the very best student advocates and mock trial competitors," said Powell. "This competition gives these young advocates the opportunity to face the very best of their peers. The challenging nature of the competition gives all of us an opportunity to see these talented law students shine," he added. "I hope all of our competitors leave with a sense of pride in what they have accomplished."

Unlike traditional mock trial competitions, participants do not get to prepare for the case prior to the start of the event. The 16 competitors are given a case file a mere 24 hours prior to the opening rounds. Preparation includes reviewing depositions, records, photographs, and of course, developing a theory of the case. Shortly before each round, competitors are assigned a witness or witnesses who may be used at their discretion during the round. Baylor Law, as the organizing institution, does not field a team.

"Top Gun is unique by design - competitors only have 24 hours to prepare the case; there is only one lawyer for each side- no second chairs to help, and we make the competition even more interesting by making sure that the case file changes in some respect every day of the competition. Adding to the unique aspect of the competition is the award stakes - $10,000 thanks to our generous friends at Naman Howell Smith & Lee," said Baylor Law’s Director of Advocacy Programs, Robert Little.

The Case File:
An Employee Falls From a Converted Loading Dock at Work. Who's Responsible?

When an employee falls off a converted loading dock at work, who’s responsible? That’s the question that faced this year’s competitors. Jordan Gilmore, an employee of Chimes Department Store regularly uses a landing area in the back of the store to take a smoke break. The landing area, a concrete platform that Chimes uses as a loading dock, has several steps that lead down to the ground below. There is no railing on the landing area or the steps, as Chimes had those removed when they took possession of the building in order to use the area as a loading dock for the store. There wasn’t any light on the landing area that night as the only light behind the store was turned off and Chimes did not have a switch for that light so there was no way to turn it on. Jordan Gilmore was a regular smoker and she had been outside on this landing area many times before this night, both to smoke and to take the trash out to the dumpster behind the store. So, he/she was very familiar with the area.

That night, Jordan Gilmore walked down the steps to the ground below the landing area to smoke a cigarette. Once she was done smoking, Gilmore began to climb the steps back up to the top of the landing area to return to work. However, she took a misstep and began to fall off the steps. To avoid falling to the ground, she jumped, landing on her feet on the ground below. She felt tremendous pain in her knee, but returned to work, only to discover shortly thereafter that she would need a full knee replacement.

Jordan Gilmore brought this lawsuit alleging that Chimes was negligent in failing to make safe or to warn of the dangerous conditions on the premises of its store, and in failing to warn its employees of those dangers or to properly supervise employees when working around those dangers. Specifically, Gilmore claims that Chimes was negligent in failing to make sure this landing area was properly lit, properly marked, in good condition, and in failing to make sure there were railings around that landing area and those steps. Plaintiff will call an expert, Kelly Danes, who will testify about various statutes and codes that are in place that require both lighting and railings in areas like this one.

The Defendant, Chimes Department Store, alleges that it was Jordan Gilmore that was negligent by failing to take proper care when walking up those steps that night. Additionally, Chimes claims that the owner of the building, Kermit Realty Group, was in control of that landing area at the time of the fall, and therefore is ultimately responsible for the condition of the landing area. In addition, the defense called an expert, Perry Hayden, who testified that since Chimes was using that area as a loading dock, they were not legally required to have railings around the area.

Serving as the presiding judge during the final round was K. Nicole Mitchell, U.S. Magistrate Judge of the United States District Court for the Eastern District of Texas. Serving on the jury (final round judges) were:


The “jurors” for each round of Top Gun are practicing trial lawyers and justices. During Top Gun they act as competition judges rating the performance of the competitors on multiple factors. The Jurors for the final round of Top Gun XII were:


In addition to winner Zoe Appler of Chicago-Kent College of Law and finalist Jenna Forster of the University of California Berkeley School of Law, the semi-finalists were Carolyn McGuigan of Fordham University Law School and Joy Holden of Harvard Law School.