Baylor University School of Law’s Veterans Clinic continues its Veterans Day commemorations by honoring attorneys Lori Krasienko and Carlie C. Gause with its Veterans Clinic Advocate of the Year Awards. The annual awards are given to the Baylor Law Veterans Clinic volunteer lawyers who go above and beyond in pro bono legal service to veterans and their spouses in the past year. 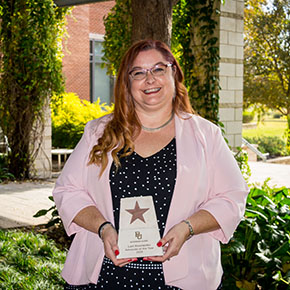 Lori Krasienko (JD ’02) of the Krasienko Law Firm PLLC in Waco has represented veterans in eight family law cases since 2014 for the Veterans Clinic, spending over 100 hours for these clients. She has taken on difficult divorce, custody, and CPS cases and has cheerfully served veterans whose personal lives are in crisis. She attended Ball State University, where she obtained a bachelor’s and a master’s degree, and then graduated from Baylor Law with her law degree in 2002.

Carlie C. Gause of the law firm Pakis, Giotes, Page & Burleson, P.C. in Waco has represented veterans and their spouses in estate matters since 2016 for the Veterans Clinic, helping to bring closure for those grieving the loss of a loved one. She received her bachelor’s and master’s degrees from Texas State University and her law degree from Texas Wesleyan University. 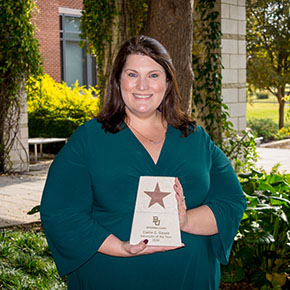 “I really enjoy being able to help out. Veterans don’t get all of the help that they need and one of the ways I can help and can give back is to provide them with the legal assistance they need,” stated recipient Lori Krasienko upon receiving the Advocate of the Year Award. Fellow recipient Carlie Gause added, “It is a rewarding experience. It is wonderful to have the opportunity to use my degree to benefit people who sometimes get overlooked.”

Krasienko and Gause were honored by Dean Brad Toben and Clinic Director Josh Borderud at a private ceremony at the Law Center on Thursday, November 12, 2020. Expressing his gratitude for their efforts, Borderud said, “Carlie and Lori proudly and effectively serve those who served. We are blessed to have attorneys of their caliber willing to represent veterans who would otherwise have no lawyer to shepherd them through a difficult time in their lives.”

Founded in 2012 by Professor Bridget Fuselier, the Veterans Clinic has served over 1,600 veterans and their spouses in the past eight years.