Professor of Law Gerald Powell (JD '77) was honored with the 2020 Outstanding Mentor Award by the Waco-McLennan County Young Lawyers Association (WMCYLA) at a surprise presentation during the October 23rd Practice Court class. 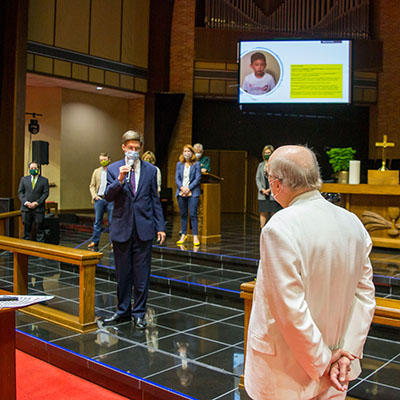 According to the WMCYLA, the Outstanding Mentor Award recognizes an attorney who has consistently demonstrated a commitment to mentoring young lawyers in his or her legal community and is someone who significantly contributes to the profession and the community.

Former student and now co-Practice Court professor Elizabeth Fraley, speaking of Powell’s influence on her career, said, “Perhaps no one has influenced my career more than Powell. He taught me evidence and advocacy. He taught me courage and character. He opened the opportunity for me to teach practice court, follow in his boot steps and hopefully, shape a few lives as he has shaped mine.” Professor Fraley added, “He is the mentor I most trust and value, and he is most deserving of this award.”

Professor Jerry Powell was born in Waco, Texas and attended Waco High. He then went to Baylor University and was a top debater. He reigned as champion of the Southwest Conference and qualified for the national debate tournament. After graduation, he attended Baylor Law, where he was member of the national mock trial team and national moot court team, and executive editor of the Baylor Law Review.

Powell graduated first in his class in 1977. Upon graduation, he moved to Dallas to practice law as a trial lawyer. Despite a successful practice and becoming a partner at was then-Vial, Hamilton, Koch, & Knox in 1982, Professor Powell was recruited by Dean Brad Toben to return to Waco and teach in 1986. In 1987, he was appointed the Abner V. McCall Professor of Evidence Law. Professor Powell also has been named a Master Teacher by Baylor University, the highest honor granted to Baylor faculty members.

WMCYLA Immediate Past-President, and Baylor Law’s Assistant Dean of Student Affairs and Pro Bono Programs Stephen Rispoli stated during the presentation, “Professor Powell has shaped and influenced my life in more ways than we have time for me to describe. I would not be at Baylor Law if it were not for him.” He added, “He has opened doors for me and mentored me at each step in my life. Thank you, Professor Powell.”

Professor Powell is known for the tough love he exhibits to his students in Practice Court advocacy sessions. He said Practice Court is a method that works. “I guess the old adage is, ‘the proof is in the pudding,’ ” he says. “When you look at our graduates and what they accomplish in the world, that’s a reflection on our program, and that makes us very proud. The students come in very smart, and we take them and turn them into very capable lawyers, so that by the end, they are ready to step into a courtroom and represent a client or take the bench as a judge. It’s personally rewarding to see that transformation.”

His devotion to students is exhibited by the remarks that other former students noted during the presentation:

“What can be said about Professor Powell? For so many lawyers like me, he’s Obi Wan Kenobi, the person who showed us the ways of our illustrious profession. My wife, Morgan, and I often reminisce about Powell’s teaching, and we never fail to conclude that we’ve lost count of the number of times we’ve left courtrooms and thought, ‘thank God I had Powell as a teacher.’ I’d be a lesser lawyer without him.”
-Will King, JD '11

“Professor Powell instills an unwavering commitment to taking the purposeful—and oftentimes—hard road to serving clients, never believing any case is too tough, and never conceding to an excuse when its oftentimes all too convenient. I left Practice Court 8 years ago and have not yet walked into a courtroom with standards as high as Professor Powell’s. Adopting his high standards for professionalism and advocacy, as my own, has served me well.”
-Will Thomas, JD '12

“Professor Powell is a hero of mine. I saw two sides of Powell. The didactic, ever knowledgeable trial lawyer on the one hand who demanded my best efforts and taught me to recognize when I was giving my best effort to myself and eventually my client—it was the tough, fierce side of him. That was one side. The other side, which I saw first-hand after practice court, was my favorite side. He is the warmest, most-caring mentor I have ever had who brought out the best in me and taught me to be a fierce litigator, but to never lose my empathy for others or the priority of family. I will always remain grateful.”
-James Willis, JD '12

“Professor Powell is both brilliant and terrifying in the classroom and courtroom. What I can see so clearly though is his genuine love for what he does and helping others. He sees potential in us even when we don’t, especially when we don’t, and he doesn’t let us give up. ”
-Jeanine Rispoli, JD '11

Professor Powell has not just been a mentor for young lawyers. He is also a dedicated servant in the community, frequently teaching Baylor continuing education classes on historical subject. He is also the former Scoutmaster of Troop 453, Boy Scouts of America. In that capacity, he has led Scouts on weeklong expeditions in backcountry New Mexico and hiked 40 miles through the Grand Canyon in Arizona.