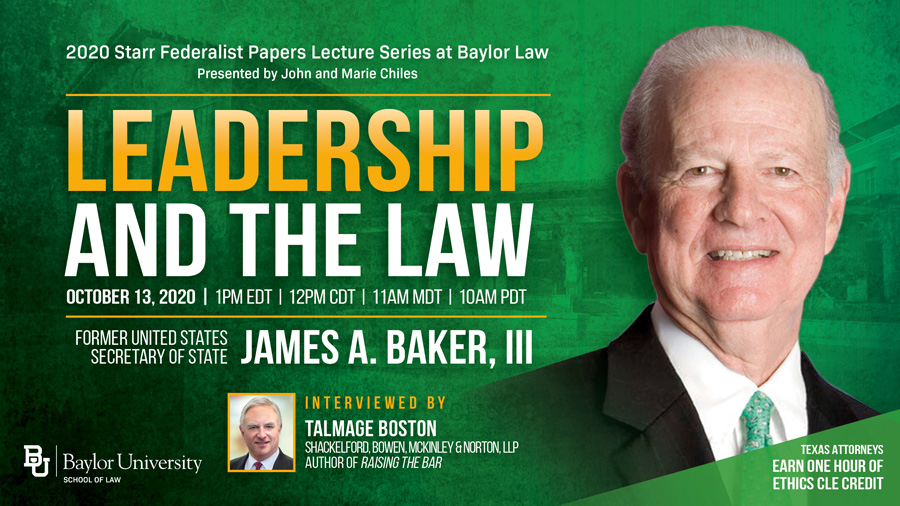 Former U.S. Secretary of State James A. Baker, III, whose 30-year legacy of public service includes senior positions under three U.S. presidents, will be interviewed at the 2020 Starr Federalist Papers Lecture at Baylor Law on Tuesday, October 13 at noon CDT. Secretary Baker will be interviewed by accomplished author and distinguished trial lawyer Talmage Boston, as they discuss Secretary Baker’s remarkable career, the leadership lessons learned from his years of experience in public service, and the skills and capabilities of lawyers that contribute to success as effective leaders and problem-solvers in the public square.

Baker and Boston will also discuss Baker’s newly released biography, The Man Who Ran Washington: The Life and Times of James A. Baker III, by Peter Baker and Susan Glasser. The Wall Street Journal calls The Man Who Ran Washington “an illuminating biographical portrait of Mr. Baker, one that describes the arc of his career and, along the way, tells us something about how executive power is wielded in the nation’s capital.” In Talmage Boston’s review of The Man Who Ran Washington, published in the Washington Independent Review of Books, Boston states, “[This] book provides a complete, persuasive explanation of how this 45-year-old prominent but politically inexperienced Houston transactional lawyer arrived in the nation’s capital as undersecretary of commerce in July 1975, and within six months, began his meteoric rise to the peak of the DC power pyramid…” The New York Times calls it “enthralling,” and states that, “The former Secretary of State’s experiences as a public servant offer timeless lessons in how to use personal relationships, broad-based coalitions and tireless negotiating to advance United States interests.”

A 1991 recipient of the Presidential Medal of Freedom, Baker served as Secretary of State under President George H.W. Bush, as Secretary of the Treasury under President Ronald Reagan, and as Under Secretary of Commerce during President Gerald Ford’s administration. He was also White House Chief of Staff under Reagan and George H.W. Bush. More recently, he served as a personal envoy of United Nations Secretary-General Kofi Annan and as co-chair of the 2006 Federal Commission on Election Reform, the Iraq Study Group, and the National War Powers Commission. Baker is senior partner in the law firm of Baker Botts and honorary chairman of the James A. Baker III Institute for Public Policy at Rice University. He lives in Houston with his wife, Susan.

Talmage Boston, author of 1939: Baseball's Pivotal Year: From the Golden Age to the Modern Era, Raising the Bar: The Crucial Role of the Lawyer in Society, and Cross-Examining History: A Lawyer gets Answers from the Experts about our Presidents, maintains his full-time law practice as a commercial litigator in Dallas, Texas. He is a partner at Shackelford, Bowen, McKinley & Norton, LLP and has been recognized in Texas Monthly magazine as a “Texas Super Lawyer” every year since 2003 and named among the “Best Lawyers in America” since 2013.

The annual lecture series was established by Baylor benefactors John and Marie Chiles to showcase the importance of the Federalist Papers. The Federalist Papers are a collection of 85 essays written by Alexander Hamilton, James Madison and John Jay between 1787 and 1788. The authors wrote under the name “Publius” and attempted to make the legal and political case for the ratification of the U.S. Constitution, outlining how the new government would operate and why it was the best choice for the United States of America.

This session has been approved for Minimum Continuing Legal Education credit by the State Bar of Texas Committee on MCLE in the amount of 1 credit hour.

Pre-registration for this virtual event is required. Participants in the 2020 Vision for Leadership Conference at Baylor Law are automatically registered. All others may register, here: https://www1.baylor.edu/ers/register.aspx?event_id=129521.