Angela Cruseturner (JD ’02), Has Been Named the 2020 Young Baylor Lawyer of the Year

The 2020 Young Baylor Lawyer of the Year, Angela Cruseturner, chats with Dean Brad Toben After the Private Award Ceremony

Angela Cruseturner (JD ’02), Assistant Dean of Career Development at Baylor Law, was honored as the 2020 Young Baylor Lawyer of the Year at a private ceremony. Under Angela’s direction, Baylor Law’s Career Development Office has posted record employment statistics for recent graduates, and the Professional Development Program has been recognized as one of the premier professional formation programs in the nation.

“Angela is a tireless advocate for Baylor Lawyers,” stated Dean Brad Toben “She has had a hand in creating opportunities for our young lawyers and helps prepare them to make a remarkable impact in the legal world. Her selfless dedication to helping others see the value in our students and graduates has led to record high employment numbers for our recent graduates. Being named the 2020 Young Baylor Lawyer of the Year is an honor she richly deserves.” 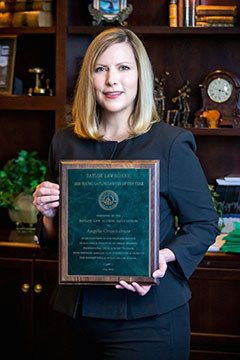 Angela Cruseturner, the 2020 Young Baylor Lawyer of the Year

Angela joined Baylor Law’s Career Development Office in 2011 after serving for four years as Director of Admissions and Student Recruitment. Prior to her return to Baylor Law, she worked as a staff attorney for the Tenth Court of Appeals in Waco, Texas and spent several years as staff attorney at Pakis, Giotes, Page & Burleson, P.C.

Angela was the driving force behind Baylor Law’s award-winning Professional Development Program. More comprehensive than professional formation programs available at other law schools, students are required to complete 18 seminar hours over their three years of law school in addition to their regular course load. The seminars offer students guidance in areas such as client relations, legal technology, legal ethics, law firm economics and financial management, legal marketing and networking, professional organizations and leadership opportunities, navigation through common ethical issues, job search strategies, and professional writing. Angela works with a faculty and staff committee to schedule an abundance of seminar options each quarter, which gives Baylor Law students the flexibility to tailor the program to the kind of legal practice they seek to pursue.

“It is amazing what Angela quietly accomplishes behind the scenes. Everyone knows that she heads up our phenomenally successful Career Development Office, but most people do not know the depth of her work behind our high job-placement numbers,” stated Professor of Law Jim Wren, “She is also the guiding force for our award-winning Professional Development Program. That program is designed to educate our students on professional and career topics, beyond what they get in classes, so that they hit the ground running in their jobs. Our students are the beneficiaries of her dedication. I am a huge Angela Cruseturner fan,” he added.

Angela assists every Baylor Law student with his or her job search by providing counseling on career opportunities, application preparation, interview skills, and professional networking. She also coordinates recruiting efforts with potential employers. Young Baylor Lawyers are often complimented on their professionalism, maturity, and thoughtfulness, which is no doubt thanks to Angela’s impact on Baylor Law’s Career Development services.

Upon hearing the news of Angela’s selection, Professor of Law Elizabeth Miller observed, “We were very fortunate to lure Angela back to Baylor Law a number of years ago. She has endless energy, vision, and creativity, as well as the execution skills necessary to bring her ideas to fruition. Despite having an extremely demanding position at the Law School, Angela makes time to serve the profession and our community in significant ways. She certainly epitomizes the qualities that are recognized by the Young Lawyer of the Year Award.” Miller added enthusiastically, “Congratulations, Angela!” Fellow Professor of Law Tom Featherston added, “Angela is a terrific person and is well deserving of this recognition. She took on the challenging task of Director of the Career Development Office during the economic malaise of post-recession 2011 and has been totally dedicated to assisting her clients, our students, with their career goals and opportunities ever since.”

In addition to her role at Baylor Law, Angela participates in numerous civic and professional organizations. She is an elected Fellow of the Texas Bar Foundation, and she serves on the Executive Committees of the Judge Abner V. McCall American Inn of Court and the McLennan County Dispute Resolution Center, and on the board of directors of the Waco-McLennan County Bar Association. Cruseturner is an active member of the National Association of Legal Placement (NALP), which provides opportunities for her to collaborate with and learn from top legal recruiters and career services professionals across the country. She is a graduate of Leadership Waco and is a past recipient of the Outstanding Young Lawyer Award for McLennan County.

Angela has two sons. Her oldest, Caleb, was an infant when she entered law school and her youngest, Cade, was born two days after she completed Practice Court. Caleb is now a senior at Baylor University, and Cade is a recent graduate of Midway High School.