The Texas State Bar Litigation Section has awarded Baylor Lawyer Harper Estes (JD ’79) the Luther (Luke) H. Soules III Award. The award is presented annually to an attorney who “embodies excellence in the practice of law and exemplary service to the Bar through outstanding professionalism and community impact.” 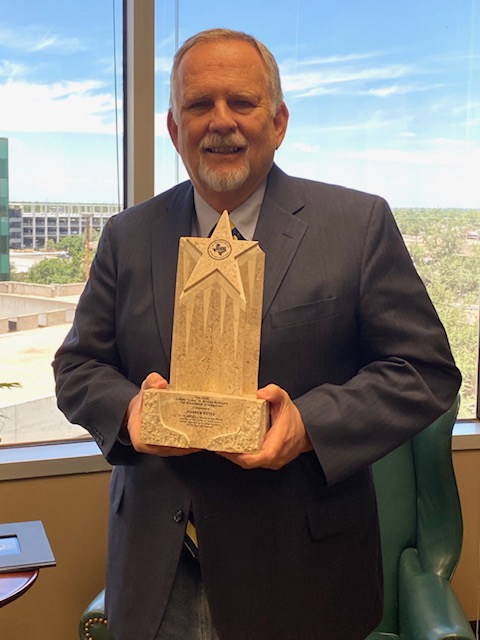 The Luke Soules Award recognizes attorneys in good standing in the State of Texas for a minimum of 10 years who meet the following criteria: demonstrated commitment to equal justice under law; conduct promoting the rule of law; outstanding examples of professionalism; community impact as a result of the practice of law and one or more significant contributions as a result of legal representation.

Upon receiving word of the award, Estes stated, “No award like this is ever truly individual. Most of the credit goes to my family, my mentors early and throughout my practice and the talented people with whom I have been blessed to work. I started this job in 1980 with another Baylor Law graduate, Steve Kiser, and we have practiced together for our entire careers. I learned long ago that he makes me a better lawyer and he, along with my other colleagues, has made this job fun. Now I have the privilege to learn from much younger Baylor Lawyers like Derek Cook and Jack Shepherd.” He added, “I also give great credit to Professor Ed Horner who taught oil and gas while I was at Baylor Law. I was always impressed with how fulfilled he was because he loved what he was doing and those with whom he was doing it. That has always stuck with me and I have been blessed to have the same experience. While I would not want to experience Practice Court again, I have always been grateful for my days at Baylor Law School and the lessons I learned about service, integrity and the rule of law.”

Estes has a distinguished career as a trial lawyer in civil and business litigation focused primarily on the oil and gas industry. He is a sought-after mediator and arbitrator and has conducted over 1,000 mediations. Harper has argued cases before the Fifth Circuit Court of Appeals, numerous Texas intermediate appellate courts, the Supreme Court of Texas, and has served on both domestic and International Arbitration Tribunals.

A prolific author of journal articles, book reviews, and opinion columns in the Texas Bar Journal, Estes is a frequent speaker at continuing legal education workshops, and often volunteers at events at Baylor Law.

Estes served as President of the State Bar of Texas from 2008-2009. In addition, He has served as president, president-elect, vice president and secretary/treasurer of the Midland County Bar Association. He also served on the State Bar of Texas' board of directors as chair of the grievance committee, on the Texas Young Lawyers Association board of directors and as secretary/treasurer of the Midland County Young Lawyers Association.

Certified in civil trial law by the Texas Board of Legal Specialization, Estes is a Life Fellow of the Texas Bar Foundation. He also is active in Big Brothers/Big Sisters and the First Presbyterian Church of Midland.

He received his Bachelor of Arts from Texas Tech University in 1977 and his Juris Doctor from Baylor Law in 1979.

"Harper is truly deserving of this, and many other, honors," said Brad Toben, dean of Baylor Law. "He is a highly skilled, accomplished and thoughtful lawyer. In addition to a successful legal career that spans over four decades, he has selflessly devoted his time and energies in service of the legal community in Texas. He lives a life devoted to service: service to the law, his community, and his church.”

Harper and his wife Dee have lived in Midland Texas since 1980. In addition to his storied legal career, Harper occasionally sings with, and writes songs for, the Backsliders, a bluegrass-gospel group.