Simone Leighty of the University of the Pacific McGeorge School of Law makes her opening statement during the final round of Top Gun XI.

Simone Leighty of the University of the Pacific McGeorge School of Law was declared the winner of "Top Gun XI," Baylor Law's eleventh anniversary edition of the Top Gun National Mock Trial Competition. The 2020 edition of Top Gun was the first mock trial tournament ever to be held live and completely online, making this already unique tournament unprecedented. Students competed from courtrooms, classrooms, and living rooms across the country via Zoom. Leighty emerged victorious after convincing an all-star panel of experienced trial attorneys and sitting judges that her performance deserved being named "Top Gun" after the intense final round on Sunday, May 31, 2020. After narrowly beating out runner-up Aishling Fitzpatrick of Fordham University's School of Law, Leighty earned bragging rights as 'Top Gun' and took home the grand prize of $10,000, sponsored by long-term Top Gun partner, Naman Howell Smith & Lee PLLC. 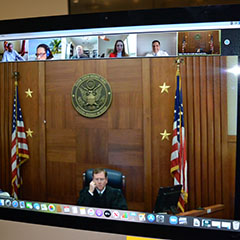 Honorable J. Rodney Gilstrap, the Chief District Judge of the United States District Court for the Eastern District of Texas shares instructions with the judges of the final round of the Top Gun 2020 competition.

"When my name was called, I was speechless; It felt as though the last eleven years of competing in Mock Trial had led me to that very moment. I'm humbled and grateful to have earned such a prestigious title," stated Leighty after hearing she had been named the 2020 Top Gun. She added, "I'm thankful to have worked with an extremely talented and supportive team. I'm honored to be representing McGeorge School of Law in receiving this recognition."

Simone's victory at Top Gun XI concludes her long career as mock trial advocate and ushers in what will no doubt be wonderful career as a prosecutor. "I can't thank Baylor enough for the opportunity, Top Gun is the gold standard of mock trial competitions, in real life and over Zoom," stated Simone's coach, Jason Schaff of Flesher Schaff & Schroeder, who added, "Simone has been a part of the Pacific McGeorge trial advocacy family since she won our first-year competition. She brought tremendous talent to our school and then polished those skills over the next three years."

Celebrating its eleventh year, Baylor Law's Top Gun National Mock Trial Competition, by design is already one of the most unique competitions in the country. Unlike traditional mock trial competitions, participants cannot prepare for the case prior to the start of the event. Competitors were given access to the case files a mere 24 hours before the first round of the competition began. With only one day to review the facts of the case and prepare for trial, competitors needed to quickly assimilate depositions, records, photographs, and other materials. Volunteer witnesses were provided, but competitors only had a short period of time to prepare them to take the stand – and it all must happen within the limitations of virtual meeting technology. However, this the 2020 edition of Top Gun was made even more challenging by the technology constraints of a livestreamed, virtual event – something that had never been tried before in any mock trial competition.

"We started Top Gun in 2010 to be an exceptional competition that uniquely challenges the most successful mock trial competitors in the country," said Gerald Powell, Master Teacher and The Abner V. McCall Professor of Evidence at Baylor Law. "This year it was especially important to us to offer the country's best student advocates a chance to compete against the most talented of their peers and learn the most effective way to advocate for their clients in a completely virtual environment – a concept lawyers and courts across the country are also in the process of figuring out," continued Powell.

"Trying cases and holding hearings online is something completely new, and we're all trying to figure out the best ways to advocate for our clients in this new world. So, we knew that students, professors, and even practicing attorneys from across the country would be watching Top Gun this year to see what works and what doesn't," said Robert Little, the Director of Advocacy Programs at Baylor Law. "During the tournament and since it concluded, we've heard from a lot of people around the country, and the feedback was overwhelmingly positive. So, we think our success has also served to assure the law school advocacy community that online tournaments will work, which is great because it means our students will get chances to learn and compete even if they can't travel to tournaments in person in the fall," Little continued. "Of course, we are so grateful to our friends at Naman, Howell Smith & Lee who once again made this competition possible and for awarding the best advocate with a $10,000 prize," said Little.


The Case File: A Student Dies on the Field - Who's to Blame? 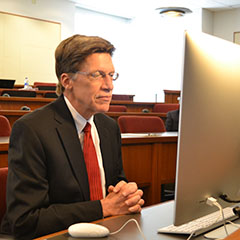 Baylor Law's Dean Brad Toben 'testifies' in the final round

On September 7, 2018, the soccer team at Waco High ran a full-scale scrimmage under the direction of their coach, Reese Taylor. The team practiced for hours in the triple-digit Texas heat. During the scrimmage, Rory failed to complete passes to other players, receive passes from other players, or be in the proper position on certain plays. In addition, Rory missed a wide-open goal scoring opportunity with an errant shot at goal. As a result, Coach Taylor sent Rory to run "Burma Road." Running "Burma Road" requires a student to run thirty yards, dribble a ball for another thirty yards, score a goal on an open net, and then "bear crawl" back to the starting point, which entails crawling on all fours for sixty yards.

Rory ran "Burma Road" at least twice in the 105-degree heat. Coach Taylor considered Rory's running of "Burma Road" as "dogging it or goofing off," so Coach Taylor ordered the entire rest of the team to line up on the field ten yards in front of Rory. Coach Taylor then instructed the players that they were going to do slide tackling drills, where Rory would dribble the ball towards them and each player would have to perform a slide tackle to try to take the ball from Rory. Slide tackles involve a lot of contact and often result in the player that has the ball being taken to the ground. Coach Taylor would blow the whistle, Rory would begin dribbling the ball, and the other player would then run at Rory and slide at his/her legs to try and take the ball. After the fifteenth slide tackle, Rory didn't get up off of the ground. Instead, he/she lay there and began convulsing. Rory died before any medical personnel were able to arrive on the scene. Upon examination of the deceased's body, 60 nanograms per milliliter (ng/mL) of cocaine was found in Rory Street's system.

The Plaintiff contends that Defendant's failure to recognize and remedy the symptoms of heat exhaustion or heat stroke resulted in the death of Rory Street. The Defendant contends that Rory's cocaine use is what caused Rory's death.

As the host, Baylor Law does not compete.

Simone Leighty, University of the Pacific McGeorge School of Law

Eric Love and Second Chair Lauren Doig of Temple University Beasley School of Law, who competed admirably amidst social unrest occurring just outside, and fire alarms blaring inside, their courtroom.

The "jurors" for each round of Top Gun are practicing trial lawyers and justices. During Top Gun they act as competition judges rating the performance of the competitors on multiple factors. The Jurors for the final round of Top Gun XI were:

• Katie Sweeten, Trial Attorney in the Counterterrorism Section of the National Security Division of the Justice Department in Washington, D.C.

University of the Pacific McGeorge School of Law – Simone Leighty

ABOUT BAYLOR LAW
Established in 1857, Baylor University School of Law was one of the first law schools in Texas and one of the first west of the Mississippi River. Accredited by the American Bar Association and a member of the Association of American Law Schools, Baylor Law has more than 7,600 living alumni and a record of producing outstanding lawyers, many of whom decide upon a career in public service. The Law School boasts among its notable alumni two governors, members or former members of the U.S. House of Representatives and the U.S. Senate, two former directors of the FBI, U.S. ambassadors, federal judges, justices of the Texas Supreme Court and members of the Texas Legislature. In its law specialties rankings, U.S. News & World Report ranks Baylor Law's trial advocacy program as among the best in the nation at No. 2, while the Law School is ranked in the Top 50 of the 2021 edition of "Best Graduate Schools." The National Jurist ranks Baylor Law as one of the "Best School for Practical Training," and in the top 15 "Best Law School Facilities" in the country. The Business Insider places Baylor Law among the top 50 law schools in the nation. Baylor Law received the 2015 American Bar Association Pro Bono Publico Award, making it only the third law school in the nation to be honored with the award since the award's inception in 1984. Learn more at baylor.edu/law

ABOUT BAYLOR UNIVERSITY
Baylor University is a private Christian University and a nationally ranked research institution. The University provides a vibrant campus community for more than 18,000 students by blending interdisciplinary research with an international reputation for educational excellence and a faculty commitment to teaching and scholarship. Chartered in 1845 by the Republic of Texas through the efforts of Baptist pioneers, Baylor is the oldest continually operating University in Texas. Located in Waco, Baylor welcomes students from all 50 states and more than 90 countries to study a broad range of degrees among its 12 nationally recognized academic divisions. Learn more at baylor.edu