2020 Baylor Lawyer of the Year, Ike Vanden Eykel, speaking at Baylor Law in 2019

Ike Vanden Eykel (JD ’73), has been selected as the 2020 Baylor Lawyer of the Year by the Executive Committee of the Baylor Law Alumni Association.

Vanden Eykel is one of the most respected family lawyers in the country. He has been featured repeatedly among the Top 10 Attorneys in Texas and has been consistently listed among Texas Super Lawyers and one of the Best Lawyers in Dallas. He is one of only 28 recipients of the Texas Academy of Family Law Specialists’ Sam Emison Award, the highest honor that can be bestowed upon a Texas family law attorney. As CEO and Managing Partner of KoonsFuller, he has grown the firm into one of the largest family law firms in the country. 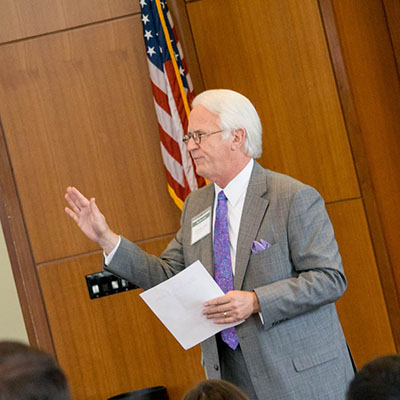 “I am honored to be named the recipient of this award,” stated Vanden Eykel after hearing he had been named Baylor Lawyer of the Year, “To be added to the list of remarkable individuals who have received this recognition is truly a humbling experience,” he added.

“Ike has given himself to the family law community like few others. His standing in the community could quite legitimately be described as iconic,” stated Fred Adams, Jr. (JD ‘81), fellow partner at KoonsFuller, who added, “Family law in the state of Texas has been substantially improved as a result of Ike Vanden Eykel’s efforts.”

Family law in the state of Texas has been substantially improved as a result of Ike Vanden Eykel’s efforts." Fred Adams, Jr. (JD ‘81), Partner, KoonsFuller

Vanden Eykel authored the book on Texas family law, Successful Lone Star Divorce, and co-authored the Texas Family Law Practice Guide and Protecting Your Assets from A Texas Divorce. He and law partner Sharla Fuller have collaborated on another book, Lone Star Divorce: The NEW Edition. In addition, he was portrayed in the book, My Husband Is Trying to Kill Me, and the made-for-TV movie, Dead Before Dawn, for his representation of abuse victim Linda Edelman.

“Ike’s universally admired abilities in the courtroom and in the conference room, and his personal and professional accomplishments are unrivaled. He can make the complex simple and has a unique ability to diffuse even the most confrontational situation,” stated Baylor Law’s Dean Brad Toben, who added, “Most important, Ike understands the obligations of a lawyer and a person of faith to serve, and he daily lives out that dedication to service."

Vanden Eykel has served on multiple boards including the Child Abuse Prevention (CAP) Center of Dallas, Collin County Children’s Advocacy Center, the Exchange Club Center for the Prevention of Child Abuse of DFW, Family Compass, and the Dallas Bar Foundation, among many others. He is presently on the Board of Trustees for Drake University, where he received his undergraduate Bachelor of Science degree in 1971.

Vanden Eykel and his wife, Cathy, have been married for over 40 years and have three children: Eric, Lindsey (JD ’14) and Steven. A private luncheon in Vanden Eykel’s honor will be hosted by Baylor Law.


About the Baylor Lawyer of the Year Award

Baylor Law will accept nominations for the 2021 Baylor Lawyer of the Year through December 1, 2020. The Executive Committee of the Baylor Law Alumni Association will review all materials received for each nominee.

To submit a nomination for the 2021 Baylor Lawyer of the Year, please send a nomination letter describing why the nominee meets the below criteria to: