Students and Faculty of both Baylor University's School of Law and History Departments united to reenact and relitigate the dramatic Boston Massacre trial in commemoration of its 250th anniversary. The trial was held at the Bennet Auditorium and was open to the public.

The mock trial demonstrated a collaborative effort between Undergraduate History students and third-year Law students. Nine Baylor Law students participated in the trial, either as prosecutors or as Counsel for the defendants. Several Baylor Lawyers and Baylor Law Professors served as Justices for the case. The witnesses and jury were made up entirely by Baylor History undergraduates who had spent months researching the events surrounding the massacre. 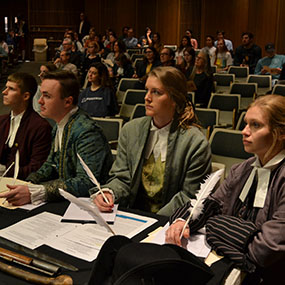 Law Students were tasked with formulating arguments for either the prosecution or defense, allowing the jury to make the final decision on a historical event that has been previously debated.

Performers were adorned in colonial-themed dress, wore powdered wigs, and used feather pens for note taking and historical accuracy. Bennet Auditorium's stage was even transformed to resemble a courtroom-like setting.

The two-hour trial also featured a Bailiff, played by Delea Sayers, who patrolled the court room, maintaining order amongst both the actors and attendees, which included Baylor University President Linda Livingstone and First Gent, Brad.

Dr. Julie Sweet, a professor in Baylor's History department, assisted in organizing the event along with Professor of Law Gerald Powell (JD '77). 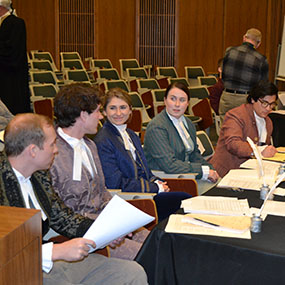 Prosecutors finalize their approach prior to the start of the event. (L-R) Cody Branstetter, Seth Stukalin, Tori Coates, Megan Ferguson, and Stefan Garcia.

Professor Powell served as Chief Justice during the hearing, presiding over the courtroom. "Our young lawyers were superb. They were enthusiastic, hard-working, and very competitive. They didn't just want to put on a good show; they wanted to win. Clients expect that in their lawyers," Powell said.

Powell also expressed an acknowledgement for the involved undergraduate departments, "Baylor Law participated in this History Department event because we believe in what they do in undergraduate humanities departments such as History, English, and Political Science. That's a great education for any lawyer and essential for any citizen."

The mock trial concluded with final statements from Law Students on both sides before giving the final decision over to the jury, who found Privates Montgomery and White not guilty. Actors and actresses in the audiences reacted to the findings with a raucous blend of joy and anger.

Additional information and photos of the event are available on the Baylor Arts and Sciences Blog, The Waco Tribune, and the Baylor Lariat.

ABOUT BAYLOR LAW
Established in 1857, Baylor Law was one of the first law schools in Texas and one of the first west of the Mississippi River. Today, the school has more than 7,600 living alumni. Accredited by the American Bar Association and a member of the Association of American Law Schools, Baylor Law has a record of producing outstanding lawyers, many of whom decide upon a career in public service. Baylor Law boasts among its notable alumni two governors, members or former members of the U.S. House of Representatives and the U.S. Senate, two former directors of the FBI, U.S. ambassadors, federal judges, justices of the Texas Supreme Court and members of the Texas Legislature. In its law specialties rankings, U.S. News & World Report ranked Baylor Law's trial advocacy program as among the best in the nation at No. 2. Baylor Law School also is ranked No. 48 in the magazine's 2020 edition of "America's Best Graduate Schools." The National Jurist ranks Baylor Law as one of the "Best School for Practical Training" and No. 4 in the nation in its most recent "Best Law School Facilities" listing. Business Insider places Baylor Law among the top 50 law schools in the nation. Baylor Law School received the 2015 American Bar Association Pro Bono Publico Award, making it only the third law school in the nation to be honored with the award since its inception in 1984. Learn more at baylor.edu/law