Ambassador Lyndon L. Olson, Jr. Speaks at Baylor Law on the Need for Civility in Our Culture

Ambassador Lyndon L. Olson, Jr. Speaks at Baylor Law on the Need for Civility in Our Culture

The Honorable Lyndon L. Olson, Jr., former United States Ambassador to the Kingdom of Sweden, spoke to Baylor Law students on the topic of "Civility and Civic Responsibility," on Thursday, February 27, 2020.

Hosted by Baylor Law's American Constitution Society, Ambassador Olson appealed for a change in the tenor of discourse in current society. Ambassador Olson chastened our "era of rudeness in society in general, in the popular culture, and in our political life." He remarked that "Our culture today rewards incivility, crudeness, and cynicism… everyone screams, and no one listens." 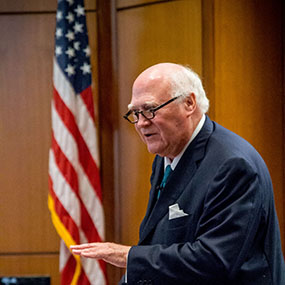 A former member of the Texas House of Representatives, Ambassador Olson is a native of Waco. Appointed by President Clinton as United States Ambassador from 1997 to 2001, he was honored by King Carl XVI Gustav of Sweden with the Swedish-American of the Year Award in 2002. Upon returning to the States, Ambassador Olson served as a Senior Advisor to the Chairman of Citigroup in New York. He has served the state of Texas in many other ways, acting as chairman for a host of philanthropic, civic and cultural organizations, including the Mental Health Association of Texas, the Texas Taxpayers and Research Association, the Association of Fire and Casualty Companies of Texas, Texas Opera Theater and the Waco Chamber of Commerce.

"Ambassador Olson has extraordinary experience in politics, government, banking, insurance, and finance," said Dean Brad Toben, "He has been honored for his civic service, professional work, and philanthropic activities. We are so pleased that Ambassador Olson continues to give back to Baylor by sharing with us his experiences, insights, and this much-needed message on the importance of civility."