“This is my third year at the People’s Law School,” stated Joanne Foster, who had driven more than an hour from Copperas Cove to participate. “It’s informative and it’s in-depth. And the fact that we’re allowed to ask questions from professionals is wonderful,” She added.

Nearly 300 people from across Central Texas gathered Saturday morning at Baylor Law to take part in this year's event. With a total of 20 courses scheduled in 24 classroom sessions, attendees had a wide variety of legal subject matter to choose from. The course listing included practical courses such as "Wills and Estate Planning," as well as fun and amusing courses like "Don’t Learn the Law from the Movies." 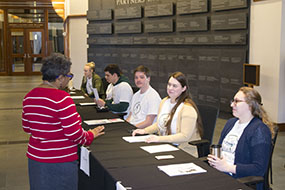 Professor Pat Wilson discusses final preparations with student volunteers before the start of the People's Law School on Saturday, February 15, 2020.

Every year, Professor of Law Patricia Wilson and a team of volunteers from Baylor Law strive to ensure that the People’s Law School not only includes long-standing popular classes, but also includes topics that reflect current political and social events. A new course in this year's curriculum, “Contesting Your Property Taxes” addressed how local counties calculate property valuations and the processes in place to challenge a valuation if a homeowner believes it is incorrect.

“So many people have a desire to better understand the law and how it affects our lives, and they are always so appreciative of our efforts to expand their knowledge,” says Professor of Law Patricia Wilson, the driving force behind the creation of the People’s Law School. "I’m always pleased with the response of the community, and knowing that we are fulfilling our goal of providing information that is both interesting and relevant motivates me to keep this program growing year after year” she added.

In addition to the program’s many sponsors, the hard work and volunteer efforts of Baylor Law students plays a significant role in the success of the program. Understanding the importance of service to the community, students assist with the organization and administration of the program and many volunteer repeatedly during their law school years.

“I volunteer every year because it’s a great way for the community to get involved with the law school, and it’s a great thing to help people be informed about the law,” stated Sky Schoolfield, A Baylor Law student in her sixth quarter. Fellow volunteer Taylor Voleski (Q7) added, “I volunteer because I get to meet people in the community and learn about why they’re interested in things related to the law.”

The complete list of the 2020 courses that were offered can be found at www.baylor.edu/law/PLS.

Some of the hundreds of central Texas residents arriving at the 15th Annual People's Law School.

Established in 1857, Baylor Law was one of the first law schools in Texas and one of the first west of the Mississippi River. Today, the school has more than 7,500 living alumni. Accredited by the American Bar Association and a member of the Association of American Law Schools, Baylor Law has a record of producing outstanding lawyers, many of whom decide upon a career in public service. Baylor Law boasts among its notable alumni two governors, members or former members of the U.S. House of Representatives and the U.S. Senate, two former directors of the FBI, U.S. ambassadors, federal judges, justices of the Texas Supreme Court and members of the Texas Legislature. In its law specialties rankings, U.S. News & World Report ranked Baylor Law’s trial advocacy program as among the best in the nation at No. 2. Baylor Law School also is ranked No. 48 in the magazine’s 2020 edition of “America’s Best Graduate Schools.” The National Jurist ranks Baylor Law as one of the “Best School for Practical Training” and No. 4 in the nation in its most recent “Best Law School Facilities” listing. Business Insider places Baylor Law among the top 50 law schools in the nation. Baylor Law School received the 2015 American Bar Association Pro Bono Publico Award, making it only the third law school in the nation to be honored with the award since its inception in 1984. Learn more at baylor.edu/law