With the recent retirement of Dean John F. O'Brien from New England Law, Baylor Law’s Dean Brad Toben is now the longest serving dean among the deans of the 203 ABA accredited law schools in the nation, with more than 28 years of service in his role. 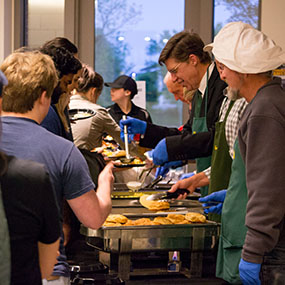 Dean Toben’s tenure, which began in 1991, greatly exceeds the average of just four years for current time in service of all ABA law school deans, and now surpasses the second-longest serving dean by more than 11 years, according to data compiled by Dean Emeritus and Professor of Law Jim Rosenblatt at the Mississippi College School of Law.

Dean Toben, as humble as always, remarked to Texas Lawyer magazine in 2018, "I love my work […] It's not a matter of length of years, it's a matter of can you make a contribution that moves the institution forward. I hope to have a blessing of doing that a lot more years." He also noted that Associate Dean Leah Teague began her tenure as Associate Dean at the same time in 1991 and now is “surely the longest serving associate dean in legal education.”

Dean Toben has led Baylor Law through an era of tremendous change, while building upon the successes and institutional objectives of his predecessors. During his time as dean, Baylor Law undertook an impressive building and endowment campaign and moved to a beautiful new riverside location at the Sheila & Walter Umphrey Law Center. His tenure has seen significant faculty and staff expansion, a marked reduction in the faculty-student ratio, and the development of a vibrant pro bono and public service program that has won ten awards from the ABA and state bar entities. During his tenure, the school has developed several new programs, including a focus on professional development and on leadership. Baylor Law now offers the nation’s first Executive LL.M. in Litigation Management, and several dual-degree programs.

Baylor Law now has significant opportunities for students interested in transactional practice, or in a prosecution career or criminal defense practice. Dean Toben’s tenure has seen the re-design one of the most rigorous legal writing programs in the nation. Legal writing and research assignments are designed collaboratively among the six full-time writing faculty members and other faculty members. In addition, his tenure has seen the establishment of a foreign study program in Scotland focused upon advocacy, and a field placement program in Lusaka, Zambia focused upon juvenile justice.

Baylor Law students now compete with notable success in well over thirty-five interscholastic advocacy and transactional competitions, while the school sponsors three high-profile competitions in mock trial, transactional law and writing skills. Baylor Law also has continued its unparalleled success on the Texas bar exam and enjoys an enviable employment rate for its graduates. Apart from capital and annual gifts, Dean Toben has been able to raise Baylor Law’s endowment from less than $1 million to over $120 million. Under Dean Toben’s leadership, Baylor Law has risen to the top 50 of U.S. law schools, according to U.S. News & World Report, and is now ranked #2 in the nation for Trial Advocacy by U.S. News.

“Under [Dean Toben’s] leadership, we have greatly expanded our programs while remaining steeped in the traditions and values established by the past giants of Baylor Law,” Associate Dean Teague said.

ABOUT BAYLOR LAW
Established in 1857, Baylor Law was one of the first law schools in Texas and one of the first west of the Mississippi River. Today, the school has more than 7,600 living alumni. Accredited by the American Bar Association and a member of the Association of American Law Schools, Baylor Law has a record of producing outstanding lawyers, many of whom decide upon a career in public service. Baylor Law boasts among its notable alumni two governors, members or former members of the U.S. House of Representatives and the U.S. Senate, two former directors of the FBI, U.S. ambassadors, federal judges, justices of the Texas Supreme Court and members of the Texas Legislature. In its law specialties rankings, U.S. News & World Report ranked Baylor Law’s trial advocacy program as among the best in the nation at No. 2. Baylor Law School also is ranked No. 48 in the magazine’s 2020 edition of “America’s Best Graduate Schools.” The National Jurist ranks Baylor Law as one of the “Best School for Practical Training” and No. 4 in the nation in its most recent “Best Law School Facilities” listing. Business Insider places Baylor Law among the top 50 law schools in the nation. Baylor Law School received the 2015 American Bar Association Pro Bono Publico Award, making it only the third law school in the nation to be honored with the award since its inception in 1984. Learn more at baylor.edu/law