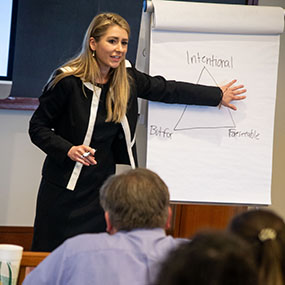 A strong part of Baylor Law tradition, every Practice Court class competes in the Bob and Karen Wortham "Mad Dog" Practice Court Competition, a week-long contest that occurs at the beginning of the second quarter of the famed Practice Court program. Mad Dog is a one-on-one (no partners) advocacy competition in which the students are given a case file a mere 48 hours before the competition and then compete head-to-head in a single-elimination style tournament. This year's Fall Mad Dog competition was held Monday, December 2 through Thursday, December 5.

Tori Coates battled fellow student Josh Dinsmore for more than three hours on December 5th to win the coveted trophy and the title of the top Baylor Law student trial advocate. As winner of the Mad Dog competition, Coates will receive $3,000 and an 18-inch bronze statuette of Matt "Mad Dog" Dawson, the legendary Baylor Law professor who started the tradition of mini-trial competitions during his tenure as director of Baylor Law's Practice Court Program. As a finalist, Dinsmore received $1,000. Semifinalists Maria McIntyre and Austin Dam each received $500.

“The competitive spirit of Baylor makes competitions like this a lot of fun. Everyone works so hard and every round was a competitive round. No competition is handed to you at Baylor Law,” stated Coates after being announced the Fall 2019 Mad Dog Champion, who added, “My competitors were brilliant, and I would be nervous to face any one of them in the courtroom.” After graduation, Coates plans to work for the law firm of Jackson Walker in Austin, Texas in their litigation practice group.


In the final round, Coates and Dinsmore tried a fictional case involving a wrongful death action filed by Jeanine Rankin against Paymore Specialty Insurance Company (“Paymore”) as a result of the death of her husband, Stephen Rankin. Mrs. Rankin asserted that her husband took his own life as a result of intentional infliction of emotional distress by Paymore in the handling of a claim asserted by the Rankins for the destruction of a commercial building owned by them and insured by Paymore. While Paymore eventually paid the policy amount to the Rankins, questions stemming from disclosures on the insurance application led Paymore to dispute the initial claim. During the dispute period, the Rankin’s business suffered, and Stephen Rankin took his own life.

The Honorable Bob and Karen Wortham have generously sponsored the Mad Dog intrascholastic competition at Baylor Law for several years. Judge Wortham serves as the District Attorney for Jefferson County and previously served as the judge of 58th District Court in Jefferson County from 2007 to 2014. He also served 12 years as U.S. attorney for the Eastern District of Texas before becoming a partner in the Reaud, Morgan and Quinn Law Firm.

"Judge Bob and Karen Wortham are wonderful friends of Baylor Law and their continued support of the Mad Dog competition, and the practical training opportunity it provides our students, is invaluable,” stated Baylor Law Dean Brad Toben.