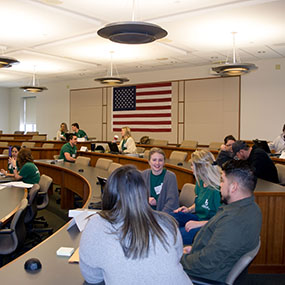 Under the direction of Professor of Law Laura A. Hernández, second- and third-year Baylor Law students, along with several volunteer Baylor Law faculty and staff members, assisted permanent residents with completing their N-400 naturalization applications, and collecting the necessary supporting documentation to send to U.S. Citizenship and Immigration Services (USCIS). 22 student volunteers worked one-on-one with the applicants, answering questions and resolving any issues that arose along the way.

All assistance offered by the Baylor Law Naturalization Clinic is free, a service that could cost filers who work with an immigration attorney anywhere from $1,000 to more than $5,000 per application. Conservatively, the Baylor Law Naturalization Clinic saved the families participating in the clinic more than $35,000 in legal fees that they otherwise wouldn’t have been able to afford. Filers must still provide the $725 fee to USCIS for their citizenship application.

The Naturalization Clinic is just the first step in a long process for these applicants. From the time they finalize and mail their application until they take the oath of allegiance, the naturalization process can take anywhere from several months to a year or longer.

“These clinics give people of Waco and surrounding areas an opportunity to naturalize without fear of having an inconsistent application keep them from proceeding to the next steps in becoming an American citizen,” said Adriana Adams, a second-year law student who plans to work for Office of the Texas Attorney General after graduation and eventually open her own law firm focused on family and immigration law. Adams added, “I love that I can be of help by ensuring that each client receive accurate information on what to bring to the clinic as well as what to expect after she/he submits the application.”


“By offering this clinic, we were able to assist several families who are now on the road to becoming United States citizens,” Stated Baylor Law Professor Laura Hernández, who added, “Immigration rules are subject to change and it’s possible that permanent residents could lose their residency status for even relatively minor offenses. Becoming a citizen ends that potential uncertainty, gives him or her the full privileges of citizenship, and allows their voice to be heard in local, state and federal elections.”

The Naturalization Clinic has become one of Baylor Law’s most sought-after clinics, and with each event, the waiting list of clients seeking assistance grows. Baylor Law has scheduled another Naturalization Clinic for March 2020. Legal permanent residents interested in becoming U.S. citizens via naturalization are invited to participate in the next clinic. Those interested must sign up in advance by calling (254) 710-4244, or by emailing the Clinic at immigrationclinic@baylor.edu.