Baylor Law hosted its Fourth Annual Judicial Reception as part of its ‘Clerkship Weekend’ on Friday, November 15, 2019. The event, which is attended each year by judges from the federal bench, is Baylor Law’s way of thanking the judges for hiring and mentoring Baylor Law students and graduates as judicial law interns and clerks. The annual reception also provides a unique opportunity for current students to interact and network with judges and their clerks while learning about the benefits of becoming a clerk. 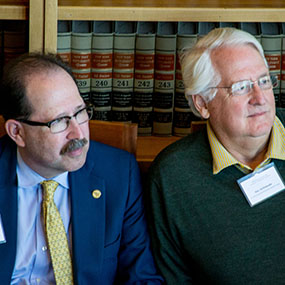 “Our goal with Clerkship Weekend is to recognize the strong relationship we have with the judiciary and to inspire Baylor Law students to consider clerking,” said Angela Cruseturner, Assistant Dean of Career Development, who added, “A judicial clerkship offers an invaluable experience of training and mentorship with a federal judge. While we encourage all students to apply, we know the competition to obtain a clerkship is fierce. The Baylor Law Career Development Office stands ready to assist our students throughout the application process.”


ABOUT BAYLOR LAW
Established in 1857, Baylor University School of Law was one of the first law schools in Texas and one of the first west of the Mississippi River. Today, the school has more than 7,500 living alumni. It is accredited by the American Bar Association and is a member of the Association of American Law Schools. Baylor Law has a record of producing outstanding lawyers, many of whom decide upon a career in public service. The Law School boasts two governors, members or former members of the U.S. House of Representatives and the U.S. Senate, two former directors of the FBI, U.S. ambassadors, federal judges, justices of the Texas Supreme Court and members of the Texas Legislature, among its notable alumni. In its law specialties rankings, U.S. News & World Report ranked Baylor Law’s trial advocacy program as one of the top 5 in the nation. Baylor Law is also ranked in the top 50 in the magazine’s 2019 edition of "America’s Best Graduate Schools." The National Jurist ranks Baylor Law as one of the "Best School for Practical Training," and in the top 15 "Best Law School Facilities" in the country. The Business Insider places Baylor Law among the top 50 law schools in the nation. Baylor Law received the 2015 American Bar Association Pro Bono Publico Award, making it only the third law school in the nation to be honored with the award since the award's inception in 1984. Learn more at baylor.edu/law