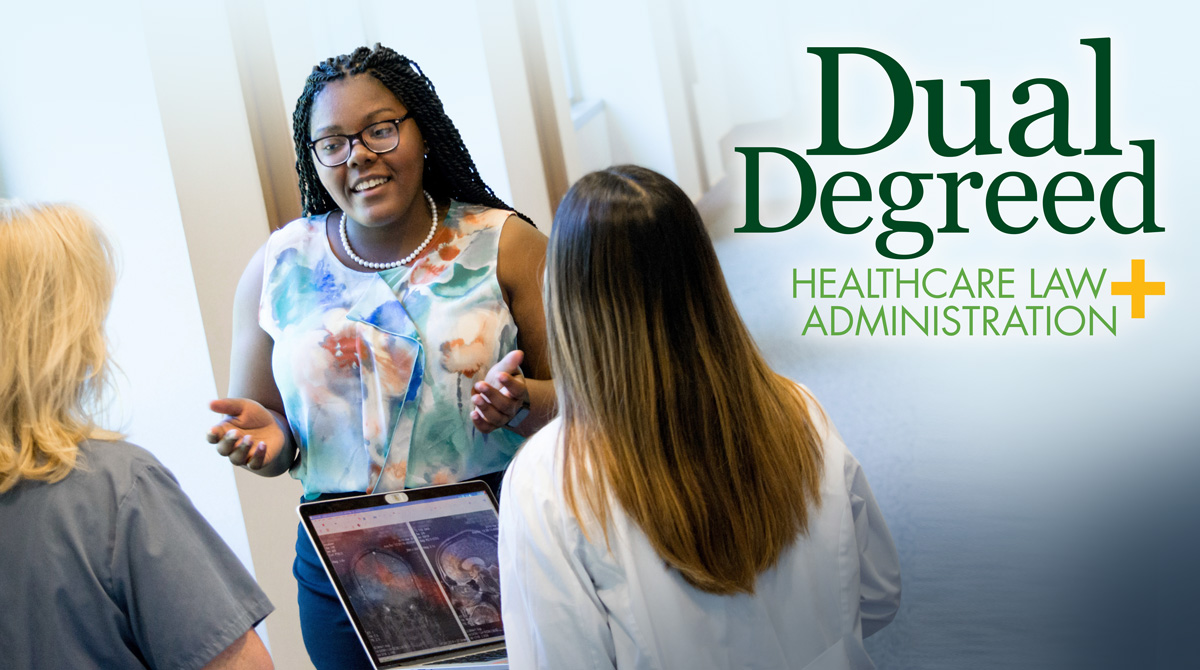 Founded in 1857, Baylor Law is both the smallest and the oldest law school in the state of Texas. Known as the nation’s leading law school for rigorous, results-oriented legal training, it’s no surprise that Baylor Law attracts ambitious, dedicated students. One such student is Erika Griffin, a twenty-eight-year-old 3L who is blazing a new trail at Baylor Law. Griffin will be the first student in Baylor’s Dual-Degree program to simultaneously complete the Law School’s Healthcare Law Professional Track and the Master of Business Administration (MBA) with a specialization in healthcare administration at the Hankamer School of Business.

Having recently fulfilled the requirements for her JD with a focus in Healthcare Law, Griffin will officially earn both of her degrees upon completion of her MBA in Healthcare Administration in the spring of 2020. In addition to carrying the necessary coursework for her dual degree, Griffin stays busy outside of the classroom. She’s a Student Ambassador, Graduate Business Association member, and a student member of the American College of Healthcare Executives.

Griffin’s path to Baylor and her chosen vocation in the healthcare system is as unique as she is. Originally from Florida, living there for the first seventeen years of her life, she is the youngest of six siblings, the first to graduate from college, and the only one to pursue a JD. Three different undergraduate schools had the pleasure of teaching Griffin before she settled at Baylor for her graduate degrees. “Funny story about how I actually chose Baylor,” Griffin laughed. “I was applying to graduate universities in Florida and my dad said, ‘apply to one Texas school,’ because he lives here, so I did some research and found Baylor.” Obtaining an undergraduate degree wasn’t challenging enough for Griffin. She wanted to be “seriously challenged,” to see how she would deal with that pressure — and the one thing that everyone promised Griffin would push her like never before, was Baylor Law’s Practice Court.

When I found out I got into Baylor, I knew immediately that I was going to commit, and it was one of the best decisions I’ve made.”

Griffin has always wanted to be an attorney. Originally, she thought she might end up practicing family or criminal law fighting for justice. However, healthcare was something she stumbled into: on a whim she took a healthcare class with Professor Pat Souter, as she needed an elective and had heard good things about his class. “He was really enthusiastic about it and he taught us so much,” Griffin said. One thing he said that stood out to her is that the healthcare industry and all of its accompanying regulations — particularly under the Affordable Care Act (ACA) — are constantly changing. New advancements or new political leadership can lead to a new round of legal updates and developments. Working in an industry in a constant state of flux is good for her, because she hates being stagnant. Plus, Griffin recognizes that healthcare impacts everyone. Even though her roll is different from the one she first imagined, she knows that as a Baylor Lawyer she’ll still be fighting for justice and helping people.

There are quite a few careers available in the combined field of healthcare and law, including healthcare provider, chief of resource manager, chief operating officer (COO), or working in compliance and ensuring that hospitals & healthcare providers are meeting certain established requirements. Griffin, ever seeking the next challenge, has decided that none of these fit her future goals. She envisions herself making partner at a firm that focuses on Qui Tam lawsuits — colloquially known as ‘whistleblower cases.’

“There’s a lot of healthcare fraud and abuse unfortunately,” she laments. “These Qui Tam cases are specialized in helping to reduce the amount of healthcare fraud — by attacking it, making sure it doesn’t happen, and going after the people that abused the system.” She is currently spending the summer as an intern at a hospital in Arizona. She is a resident administrator, where she oversees the day-to-day operations while also managing the hospital. 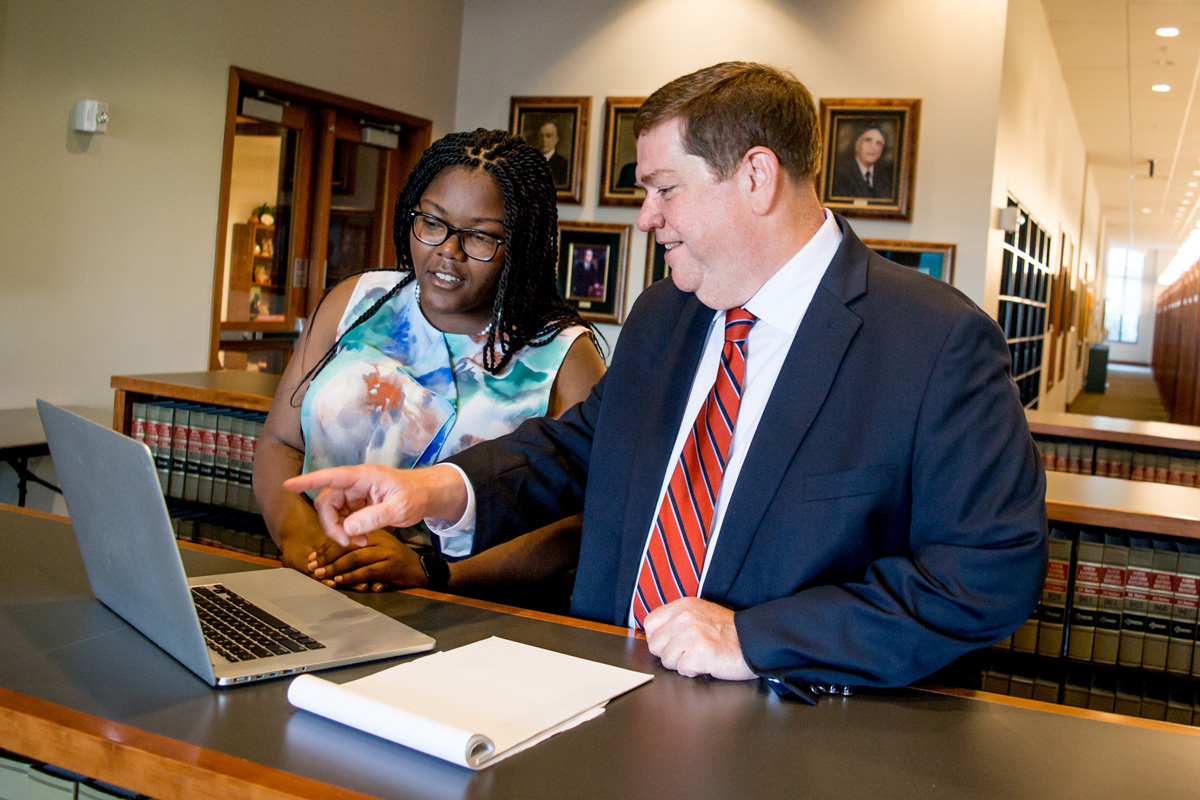 One of the professors who had a profound impact on Griffin’s future — and that of many other students at Baylor Law, is Professor Pat Souter, JD ’91. “I could always go to him with a question and he wouldn’t give me a straight-end answer. Instead, he would challenge me, and I like to be challenged.” Professor Souter has worked at Baylor Law for twenty-four years, currently oversees the healthcare law program, and teaches six different classes. Four years after earning his JD from Baylor Law, he ran into Professor William Trail — now retired — at a healthcare conference. “He asked if I wanted to help him teach a class,” Professor Souter said. “So I did. I enjoy the teaching aspects of it, the students are sharp and ask questions where you need to continuously stay current on everything.” Professor Souter is a ‘Double Bear.’ He graduated from Baylor University with a Bachelor of Business Administration (BBA) in ’87 and earned his JD in ’91 from Baylor Law.

Baylor means so much to me. Teaching is a way for me to give back.”

Souter grew up in Dallas, and the first time he ever stepped foot on Baylor was in the eighth grade during a field trip. “We were coming back from Austin and it was a Sunday afternoon,” he began. “We stopped, and they let us get off and walk around the campus. As I walked around, everyone would always smile or say hello. So since then, I knew I wanted to come to Baylor.” He had been impacted by the school’s amenities, the family-like atmosphere, the alumni, and the reputation to attend Baylor University. “I love Baylor, I’ve always felt comfortable here.”

Griffin and Souter both agree that Baylor Law is unique. “The faculty and staff really care about you. You’re more than just a number and they want you to succeed,” Griffin noted. “I wouldn’t have come as far as I have if it weren’t for them — when you graduate from Baylor Law, you leave here with more than just a degree, you leave with a family.”