Taylor A. McConnell, JD ’19, Veteran and Mad Dog Competition Winner, Most Recent Student to Be Designated a Leadership Fellow at Baylor Law

Taylor A. McConnell, JD ’19, Veteran and Mad Dog Competition Winner, Most Recent Student to Be Designated a Leadership Fellow at Baylor Law 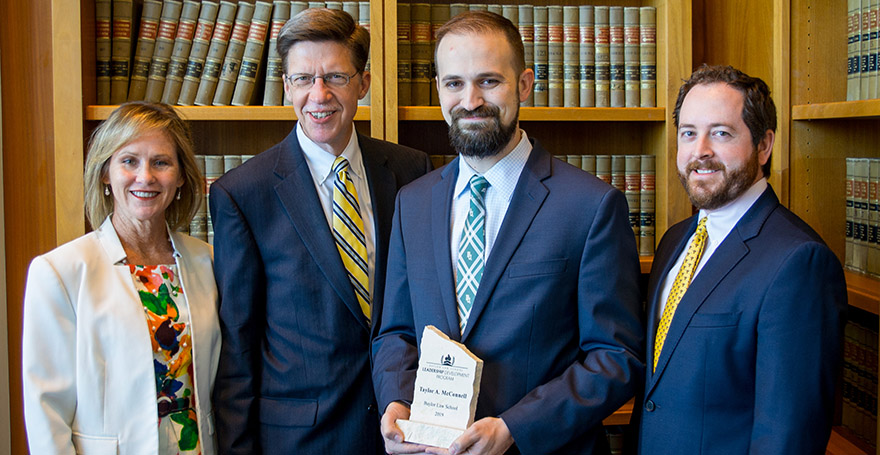 Deans Teague, Toben, and Rispoli present Taylor McConnell with a Plaque to Commemorate his Designation as a Leadership Fellow

Baylor Law School student and U.S. Army veteran Taylor A. McConnell has been designated a Leadership Fellow at Baylor Law, having completed the requirements for the Leadership Development Program.

McConnell has been a dedicated volunteer at the Baylor Law Veterans Clinic, where he assisted at the legal advice clinics, drafted wills for Central Texas veterans, and has represented several clients in litigation. He served as the President of the Baylor Law Military & Veterans Legal Society and was Secretary for LEAD Counsel. He won the Spring 2019 Bob and Karen Wortham "Mad Dog" Competition and received both the Best Speaker and Best Advocate Awards in the Fall ’18 Dawson and Sodd Moot Court Competition. In addition to volunteering for the Veterans Clinic, McConnell volunteered with Baylor Law’s Trial Advocacy Clinic, helping juveniles at their initial detention hearings in district court. Working with Baylor Law Veterans Clinic Director Josh Borderud, McConnel assisted the 74th District Court in developing the first Veterans Treatment Court in McLennan County.

“This is one of my proudest achievements in law school,” stated McConnell upon receiving notice that he was designated a Leadership Fellow, “I always recommend the program to all those who ask about it.”

Baylor Law’s Leadership Development Program is one of only a handful of law school programs in the country dedicated to preparing students to become servant leaders in both the legal profession and their communities. The program produces graduates who are not only proficient in analyzing a client’s situation and offering guidance, but who are able to think critically, navigate complex and diverse issues, use reasoning, judgment, imagination, and foresight to create new possibilities and solutions.

McConnell is currently clerking for the Honorable Christine Nowak, U.S. Magistrate Judge in the Eastern District of Texas.