This article was originally published in the Waco Tribune, June 15, 2019.
Used with permission. 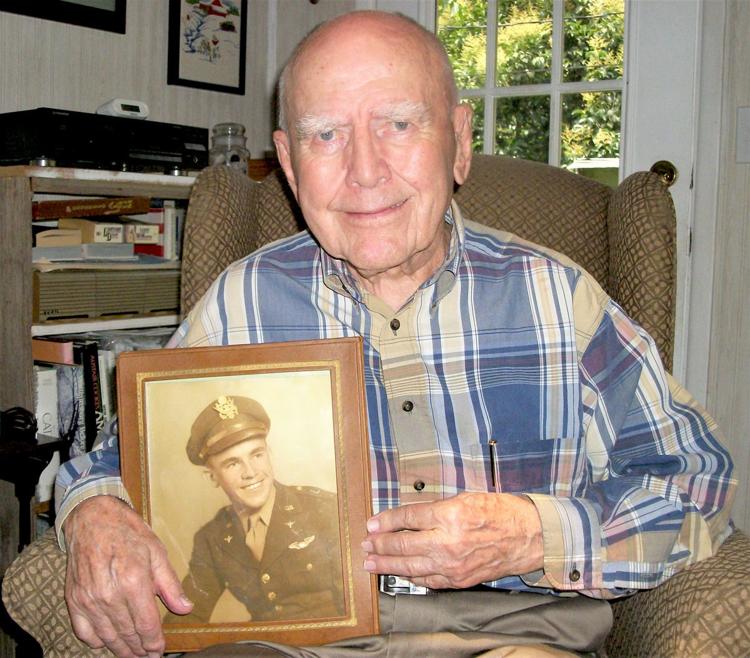 His dream was to fly the P-51, a fighter-bomber, single-engine plane that was the cream of the crop during World War II. That didn’t happen. Instead, he spent most of his time in a T-6 Texan, an advanced trainer turboprop aircraft, teaching others to fly."

It was a far cry from where he grew up. Raised in Nebraska in Boone County, Arthur F. Stelley, 95, grew up in the country on a farm. In addition to livestock, they had a host of crops, including oats, wheat and corn. By the time Stelley, the third in the family of four boys, arrived, “the doctor came 40 minutes after I did,” he said.

Times were sometimes rough growing up. During the Dust Bowl, the family had no marketable crops from 1934 to 1938. Still, they managed to survive, and his father took a job as a patent medicine salesman for the county. Stelley worked on the farm from the time he was big enough to churn butter; he attended a one-teacher school up through the eighth grade.

He was a high school senior when the Japanese bombed Pearl Harbor. One brother was drafted, and the other signed up to fly. Stelley was a bit too young, but he worshiped his older brother and wanted to follow in his footsteps.

Stelley went to work part time at the local newspaper (like his older brother had), melting and reworking linotype. Later, he became a proofreader. Like his brothers, he was eager to join the service, but had some time to wait for the draft.

Eager to go to war

He briefly attended college at the University of Nebraska on a scholarship, but really wasn’t enthused. With the war raging on, “I was eager to go,” he said.

In November 1942, he left college and joined the U.S. Army Air Corps. He took his basic training in Wichita Falls at Sheppard Air Force Base and his advanced training at a college training detachment, Oklahoma A&M (now Oklahoma State), where he stayed with a barracks full of Mormons in Stillwater, Oklahoma. “Since then I’ve never met a bunch of nicer guys,” he said.

After seven weeks, he went San Antonio to a classification center. There, he discovered he qualified mentally and physically to be a cadet and was sent to Muskogee, Oklahoma, where he took his first solo flight on Oct. 15, 1943 in a Fairchild PT-19.

An officer & a gentleman

His next step was Coffeeville, Kansas, for basic training on the BT-13, a single-engine craft where the gear did not retract. His advanced flying was in Victoria, Texas, at Officers Candidate School, where he earned his wings and became a 2nd lieutenant in January 1944.

“I am now an officer and a gentleman,” he said.

About this time, he discovered he was going to San Antonio to Randolph Air Force Base to become a flight instructor. In June 6, 1944, he then came to Waco to teach others to fly, living on what was then Waco Army Airfield. One of his more interesting assignments occurred when the U.S. agreed to furnish flight training to other countries, including Peru, Ecuador, Columbia and Brazil. Most only spoke Portuguese. All the men he trained went on to advanced training.

His principal airplane he taught others to fly with was the T-6 Texan, a single-engine plane with a front and back seat. “I flew every day,” he said.

In January 1945, they changed the operation at Waco Army Airfield and sent Stelley to Perrin Field in Grayson County, Texas. There, he began to get combat veterans who were bombardiers and navigators, but who wanted to become pilots.

On June 15, 1945, Stelley married a Waco gal, Jimmie Lee May. He continued his training of others.

When the Philippines gained its independence, the Filipino pilots needed retraining and came to Perrin Field. This kept Stelley busy, and it was how the war ended for him after three years of active service; now a first lieutenant, he stayed in the Reserves until 1957, when he was honorably discharged.

Stelley came to Waco and was a clerk/typist for the Waco VA until he enrolled in law school at Baylor. He moved to Beaumont and had a brief foray into law but ended up as a claims manager for nine years until he was offered a night teaching position at Lamar University in Beaumont. It would be the start of long, successful career.

Stelley eventually came to teach law-associated courses in the School of Business at Baylor University in 1978, retiring in 1992. He and his wife had three girls (including twins) and were married for 65 years before she passed away.

Established in 1857, Baylor Law was one of the first law schools in Texas and one of the first west of the Mississippi River. Today, the school has more than 7,500 living alumni. Accredited by the American Bar Association and a member of the Association of American Law Schools, Baylor Law has a record of producing outstanding lawyers, many of whom decide upon a career in public service. Baylor Law boasts among its notable alumni two governors, members or former members of the U.S. House of Representatives and the U.S. Senate, two former directors of the FBI, U.S. ambassadors, federal judges, justices of the Texas Supreme Court and members of the Texas Legislature. In its law specialties rankings, U.S. News & World Report ranked Baylor Law’s trial advocacy program as among the best in the nation at No. 2. Baylor Law School also is ranked No. 48 in the magazine’s 2020 edition of “America’s Best Graduate Schools.” The National Jurist ranks Baylor Law as one of the “Best School for Practical Training” and No. 4 in the nation in its most recent “Best Law School Facilities” listing. Business Insider places Baylor Law among the top 50 law schools in the nation. Baylor Law School received the 2015 American Bar Association Pro Bono Publico Award, making it only the third law school in the nation to be honored with the award since its inception in 1984. Learn more at baylor.edu/law