Tatiana Terry of Campbell Law School makes a passionate appeal to the jury during the final round of Top Gun X. 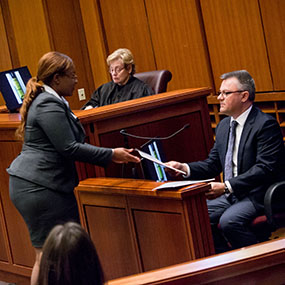 Terry reviews a document with expert witness Professor Joe Donndelinger of Baylor University's School of Engineering. Presiding judge, the Honorable Barbara M.G. Lynn, Chief Judge of the United States District Court for the Northern District of Texas, in the background.

"This competition is tremendous… there's a lot of sacrifice that goes into this moment. I've been wishing it, hoping it, praying about it for two years," stated the 2019 Top Gun Tatiana Terry, who attended Baylor Law's Academy of the Advocate in St Andrews Scotland in 2018. "I've always envisioned myself as a trial lawyer and this competition is made for people like me."

Celebrating its tenth year, Baylor Law's Top Gun National Mock Trial Competition is the most challenging invitation-only mock trial tournament in the country. The best advocates from the nation's top sixteen trial advocacy schools compete head-to-head in the winner-take-all tournament.As the host, Baylor Law School does not compete. As part of the special "Top Gun X," this year's tenth-year anniversary event, Baylor Law worked with Baylor University Museum Studies Graduate Students on "An Exhibit of Exhibits" - museum-quality displays of important facts, photos, and exhibits of each of the previous nine competitions.

"We started Top Gun in 2010 to be an exceptional competition that uniquely challenges the most successful mock trial competitors in the country," said Gerald Powell, Master Teacher and The Abner V. McCall Professor of Evidence at Baylor Law. "Top Gun gives law student advocates a chance to not only compete against the very best and most talented of their peers," continued Powell. "But thanks to our great friends at Naman, Howell Smith & Lee, the Top Gun, the best advocate at the competition will also leave with a $10,000 prize."


The Top Gun competition distinguishes itself from other mock trials with its innovative rules and challenging surprise changes and additions over the course of the competition. Unlike most mock trial competitions, participants cannot prepare for the case prior to the start of the competition. Upon arriving at Baylor Law, the advocates are given a brief video introduction, a case file, and only 24 hours to prepare both sides of the case before the first rounds begin. Case packets contain carefully prepared depositions, records, photographs, and videos. Witnesses are played by Baylor Law students, faculty, and friends, and the competitors have only a short period of time to prepare them for each round. 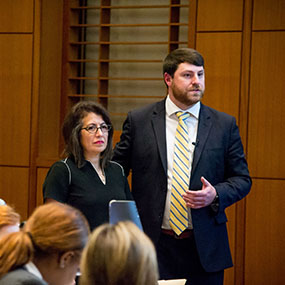 Sarah Day, expertly played by Baylor Law's Dean Leah Teague, filed a products liability suit against Teixeira Cycling Corporation and American Triathlon Association, Inc. Ms. Day was a competitive triathlete. While competing in the Doris Miller Memorial Xtremis Triathlon in Waco, Texas, Day successfully completed the swimming and running portions. However, she was injured shortly after beginning the biking portion, the final portion of the triathlon. Day alleged that Teixeira defectively designed, manufactured, and sold the bike she used for the triathlon. Specifically, she alleged that the use of an open fork design on her bike was defective and that this defective design caused her to fall from the bike and sustain serious injuries. Teixeira asserted that Sarah Day's accident was caused by her own negligence and the negligent course design of the American Triathlon Association (ATA). ATA and Sarah Day settled out of court. In the final round, on Sunday, June 9th, Tatiana Terry of Campbell Law School represented the plaintiff, Sarah Day, and Craig Shirley of Cumberland Law represented the defendant, Teixeira Cycling Corp.

Another unique aspect of the Top Gun Competition is the use of real-world partners and contributors in the case. In this year's fictitious case, Clinical Associate Professor at Baylor University's School of Engineering, and experienced mechanical engineer, Joe Donndelinger, utilized his extensive design experience to create a realistic engineering analysis of the design of the front fork of the bike in question. Access to the School of Engineering's 3D printers allowed Prof. Donndelinger to produce 3D printed versions of the front fork in question – and that of an 'improved' design – for use by advocates throughout the competition.

Cycling experts from Bicycle World in Waco made appearances at Baylor Law as well – volunteering their time to inform the case file drafters and the competitors of the ins-and-outs of cycling and to discuss how the bikes in the case work. Bicycle World also lent Baylor Law several bikes for testing and provided a bike for the final round.

The Top Gun X National Mock Trial Competition was underwritten by Naman, Howell, Smith & Lee, PLLC, and sponsored by Weinberg Wheeler Hudgins Gunn & Dial. Thank you to LitSoftware's TrialPad for their support during the competition.

The final round of Top Gun X was streamed live with expert commentary from some of the leading advocates and mock trial coaches in the country. A recording of the livestream with commentary can be viewed, here.

Simone Leighty – University of the Pacific, McGeorge School of Law


Established in 1857, Baylor Law was one of the first law schools in Texas and one of the first west of the Mississippi River. Today, the school has more than 7,500 living alumni. Accredited by the American Bar Association and a member of the Association of American Law Schools, Baylor Law has a record of producing outstanding lawyers, many of whom decide upon a career in public service. Baylor Law boasts among its notable alumni two governors, members or former members of the U.S. House of Representatives and the U.S. Senate, two former directors of the FBI, U.S. ambassadors, federal judges, justices of the Texas Supreme Court and members of the Texas Legislature. In its law specialties rankings, U.S. News & World Report ranked Baylor Law's trial advocacy program as among the best in the nation at No. 2. Baylor Law School also is ranked No. 48 in the magazine's 2020 edition of "America's Best Graduate Schools." The National Jurist ranks Baylor Law as one of the "Best School for Practical Training" and No. 4 in the nation in its most recent "Best Law School Facilities" listing. Business Insider places Baylor Law among the top 50 law schools in the nation. Baylor Law School received the 2015 American Bar Association Pro Bono Publico Award, making it only the third law school in the nation to be honored with the award since its inception in 1984. Learn more at baylor.edu/law