Recent Baylor Law graduate AJ Jameel, JD ’19, is the first Baylor Lawyer in history to graduate with the ambition of being an “esports attorney.” According to Jameel, esports is an exciting new industry with a desperate need for legal counsel.

“Esports might be the fastest growing industry you’ve never heard of,” says Jameel. “There is a huge and growing demand for attorneys who understand the quirks of how this industry works and who can step in and help the young professionals who are trying to navigate the system.” 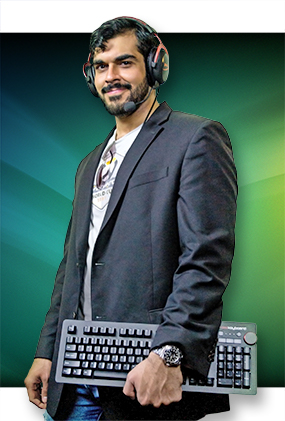 For the uninitiated, “esports” is a general term that encompasses the world of competitive video gaming. Game publishers push out new video games with the purpose of fostering a competitive scene around the games. Teams of professional players organize around the games and attract big sponsorships from some of the world’s most well-known companies, such as Intel, Coca-Cola, and Mercedes-Benz. The dream for these players is to compete in large-scale international esports tournaments, winning fame, prestige, and their shot at eye-popping prize pools. Last year, a tournament known as “The International” featured a staggering $25 million prize pool.

For Jameel, these numbers imply more than just opportunity.

“I’ve always loved the gaming community,” he said. “In college, I worked as a Senior Game Master for Blizzard Entertainment, helping moderate a game called World of Warcraft. The experience serving that gaming community was formative, and when I started law school, I knew I wanted to stay involved.” At Baylor Law, Jameel followed his own custom course plan, electing to take classes that would prepare him for his career as an esports attorney.

“We are so proud of AJ for his leadership and for his service-first mindset,” says Baylor Law Dean Brad Toben. “Baylor Lawyers are known not just for their grit and for their determination, but also for their passion to serve, and AJ has embodied all of the above as he has forged his own path to becoming an ‘esports attorney.’ While he is the first at Baylor Law to navigate this new career opportunity, I suspect he will not be the last.”

Jameel is currently serving as a conference committee member of the nation’s first Esports Bar Association (EBA). The EBA is a community of young lawyers from across the country who are passionate about serving the legal needs of the video gaming community. In addition to his involvement in the EBA, Jameel regularly attends video game conferences where he speaks with key esports stakeholders, including game publishers, designers, sponsors, and the players themselves, about the legal issues confronting the industry.