Lewis R. Sifford Named the 2019 Baylor Lawyer of the Year

Lewis R. Sifford Named the 2019 Baylor Lawyer of the Year

Lewis R. Sifford, with wife Nan Sifford by his side, receives a standing ovation on Wednesday, May 1 after being announced the 2019 Baylor Lawyer of the Year

Lewis R. Sifford, accomplished trial lawyer and founding officer of Sifford, Anderson & Company, P.C. in Dallas has been honored by Baylor Law as its 2019 Baylor Lawyer of the Year. To honor Sifford, Baylor Law hosted a luncheon at the Belo Mansion on May 1, 2019. Sifford, a 1972 Baylor law graduate, received the recognition from Dean Brad Toben and Ike Vanden Eykel, president of the Baylor Law Alumni Association. 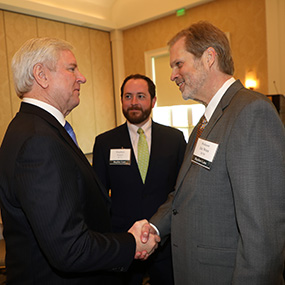 Sifford's professional accomplishments and service to both the legal profession and Baylor Law are extensive. He has conducted more than 300 continuing legal education presentations, trial demonstrations, and ethics seminars in 26 states and overseas. He has been a Leon Jaworski Fellow at Baylor Law since 2012, volunteering his time and expertise to help train the next generation of Baylor Law students in its award-winning Practice Court Program. He has also served as an adjunct faculty member at Academy of the Advocate, Baylor Law's study abroad program at the University of St Andrews, Scotland.

"Lewis speaks compellingly to the truth that as lawyers and as citizens we must pay heed to the need to preserve our sacred Seventh Amendment right to trial by jury," said Dean Toben. "As a genuine quality person and as a Baylor Lawyer, his reach into the profession and his deep understanding of human relations gives Lewis a distinctive role as a commentator on the needed directions of our profession." 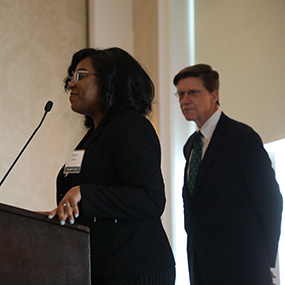 "I am deeply honored and humbled to be named the 2019 Baylor Lawyer of the Year," Sifford said. "When I read the names of those who have previously received this recognition, it is with great admiration for all of their wonderful professional and personal achievements in life," he added. "The great commitment Baylor Law has always offered its students and alumni is the continuous quest for professional excellence. I am most thankful for that commitment. I will be forever grateful for this incredible recognition and I will endeavor to live my life in honor of it."

Lewis speaks compellingly to the truth that as lawyers and as citizens we must pay heed to the need to preserve our sacred Seventh Amendment right to trial by jury. (Brad Toben, Baylor Law).

Sifford's practice includes complex commercial litigation and catastrophic personal injury and death cases, where he has represented both plaintiffs and defendants. He has tried more than 150 civil jury trials to verdict. He is Board Certified in Personal Injury Trial Law by the Texas Board of Legal Specialization and Board Certified as a Civil Trial Advocate and as a Civil Pretrial Practice Advocate by the National Board of Trial Advocacy. Mr. Sifford has served as an arbitration judge in complex securities cases and disputes involving pharmaceuticals and medical devices and is an experienced mediator.

In 2007, he was elected to serve as the National President of ABOTA. On January 14, 2012, Sifford was awarded the highest honor that the ABOTA Foundation gives: The Mark P. Robinson Lifetime Achievement Award. On January 20, 2018, he received the highest honor that the National ABOTA gives: The National ABOTA Lifetime Achievement Award. He is only the second recipient of both awards in the more than 60-year history of the organizations.

Sifford is a Fellow of the International Academy of Trial Lawyers, the American College of Trial Lawyers, and Litigation Counsel of America. He has been repeatedly named by D Magazine as one of the "Best Lawyers in Dallas" and by Texas Monthly as one of the state's "Super Lawyers". In April of 2018, Sifford received the Texas Trial Legend Award from the Dallas Bar Association.

About the Baylor Lawyer of the Year Award

Baylor Law will accept nominations for the 2020 Baylor Lawyer of the Year through December 1, 2019. The Executive Committee of the Baylor Law Alumni Association will review a resume and the first three letters received for each nominee.

To submit a nomination for the 2020 Baylor Lawyer of the Year, please send a nomination letter describing why the nominee meets the below criteria to:

Established in 1857, Baylor Law was one of the first law schools in Texas and one of the first west of the Mississippi River. Today, the school has more than 7,500 living alumni. Accredited by the American Bar Association and a member of the Association of American Law Schools, Baylor Law has a record of producing outstanding lawyers, many of whom decide upon a career in public service. Baylor Law boasts among its notable alumni two governors, members or former members of the U.S. House of Representatives and the U.S. Senate, two former directors of the FBI, U.S. ambassadors, federal judges, justices of the Texas Supreme Court and members of the Texas Legislature. In its law specialties rankings, U.S. News & World Report ranked Baylor Law's trial advocacy program as among the best in the nation at No. 2. Baylor Law School also is ranked No. 48 in the magazine's 2020 edition of "America's Best Graduate Schools." The National Jurist ranks Baylor Law as one of the "Best School for Practical Training" and No. 4 in the nation in its most recent "Best Law School Facilities" listing. Business Insider places Baylor Law among the top 50 law schools in the nation. Baylor Law School received the 2015 American Bar Association Pro Bono Publico Award, making it only the third law school in the nation to be honored with the award since its inception in 1984. Learn more at baylor.edu/law