On Saturday, December 8, more than two dozen Central Texas residents were able to participate in Baylor Law's first-ever Naturalization Clinic to assist lawful permanent residents eligible to become U.S. citizens via naturalization. Under the direction of Laura A. Hernández, Professor of Law, second- and third-year Baylor Law students, along with several volunteer attorneys and interpreters, assisted permanent residents with completing their N-400 naturalization applications, and collecting the necessary supporting documentation to send to U.S. Citizenship and Immigration Services (USCIS). 22 clinic volunteers worked one-on-one with the applicants, answering questions and resolving any issues that arose along the way. 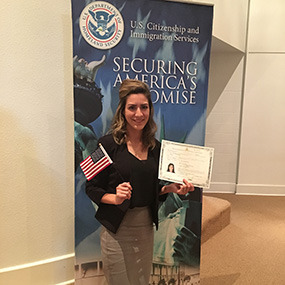 "This is something that my family and I have wanted to do for a long time," said Javier, an employee working at Baylor University, "But I had questions and wasn't sure if I could complete the application." Javier and his wife have now completed their applications and will soon be sending them on to USCIS, and are looking forward to completing the process to become citizens.

Assisting Javier's wife with her citizenship application was Baylor Law 3L, Andromeda Vega Rubio. Andromeda is no stranger to the N-400 naturalization application, not only due to the clinic training she received from Professor Hernández and others, but also because she herself filed her application and gave her oath of allegiance to become a U.S. citizen a mere five days after the clinic.


"By offering this clinic, we were able to assist several families who are now on the road to becoming United States citizens," Stated Baylor Law Professor Laura Hernández, who added, "Immigration rules are subject to change and it's possible that permanent residents could lose their residency status for even relatively minor offenses. Becoming a citizen ends that potential uncertainty, gives him or her the full privileges of citizenship, and allows their voice to be heard in local, state and federal elections."

Given the popularity of the first Naturalization Clinic, Baylor Law has scheduled a second Naturalization Clinic for Saturday, March 23, 2019. Legal permanent residents interested in becoming U.S. citizens via naturalization are invited to participate in the next clinic. Those interested must sign up in advance by calling (254) 710-4244, or by emailing the Clinic at immigrationclinic@baylor.edu.