In addition to cash awards for the top three competitors, each were awarded an opportunity to interview for an internship with the prestigious appellate law firm Kelly, Durham, and Pittard, LLP in Dallas, Texas. Professor of Law Scott Fraley, speaking about the unique competition stated, "The Ultimate Writer Legal Writing Competition is unique in two particular aspects: first, the competition employs real-world problems based on the kind of work a young associate might do in a law firm, rather than a generic essay prompt; and second, the competition offers the opportunity for three of the top finalists to interview for a potential clerkship with a highly-rated appellate law firm. No other legal writing competition, to our knowledge, is comparable in these respects."

This year's case consisted of a complex scenario designed to test contestants' abilities to review a packet of materials and draft a real-world document based on a packet of information and a brief writing prompt loosely based on a real appellate case file. Competitors were challenged to prepare a Motion for Rehearing in the Texas Supreme Court of a denied Petition for Review. The complex case involved an adverse court of appeals decision regarding a trial court ruling that struck Appellants' pleadings and awarded damages for alleged discovery abuse. The underlying case involved a claim under the Texas Theft Liability Act. 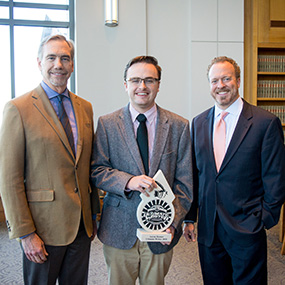 "Winning the Ultimate Writer is about much more than a trophy or award. It's about reassurance that I have the 'chops' necessary to be an effective advocate," stated this year's winner Aaron Horner, who added "We hear over and over how Baylor Law is different than all other law schools. When it comes to legal writing, Baylor is truly unique. I know alumni and current students of law schools around the county. Very few, if any, other law schools take legal writing as seriously as Baylor Law."

Speaking on the importance of the Ultimate Writer competition and Baylor Law's emphasis on legal writing, Kirk L. Pittard, of the appellate law firm of Kelly, Durham, and Pittard, LLP., this year's competition clerkship sponsor, stated, "Our firm supports the writing competition for a number of reasons. First, as a graduate of Baylor Law School, I believe in its mission and its method for educating and graduating the best qualified law students around. Additionally, as an appellate firm, quality legal writing is an absolute must and it's not a skill all attorneys have." He added, "We are very impressed with Baylor's effort to develop better legal writers through the writing center and to reward those students who have exemplified excellent writing skills. Our firm is happy to be a part of promoting this program and to provide the law students an opportunity to clerk with our firm for the summer."