The American Bar Association’s Standing Committee on Professionalism has named Baylor Law a recipient of the 2018 E. Smythe Gambrell Professionalism Award for its “Practice Ready” program. The Gambrell Award honors excellence and innovation in career and professional development programs that enhance professionalism among lawyers. Associate Dean Leah Teague and Assistant Dean of Career Development, Angela Cruseturner, accepted the award at a luncheon at the ABA Annual Meeting in Chicago on Friday, August 3rd.

In keeping with its long-standing commitment to producing graduates ready to succeed in legal practice, Baylor Law created the Practice Ready Professional Development Program in 2013 modeled after Continuing Legal Education requirements for practicing attorneys. Under the direction of a Baylor Law faculty committee led by Professor Jim Wren, the program has developed into a sophisticated personal, professional and leadership development program offering more than 50 learning opportunities every year. Baylor Law requires attendance at several seminars each year, and students must complete a minimum of 18 hours of Practice Ready programming over their three years at Baylor Law to graduate. The program is carefully designed to ensure that students take responsibility for their own personal, professional, and leadership development, while at the same time ensuring that they have access to sufficient learning opportunities to fully comprehend the core competencies needed to serve their future clients, the legal profession, and their communities upon graduation.

“We are honored that the ABA’s Standing Committee on Professionalism has recognized Baylor Law’s commitment to the thoughtful preparation of our students for the realities of modern law practice and our effort to prepare them to be ethical, influential leaders in the communities where they will live and serve,” stated Associate Dean Leah Teague. “We are grateful to Jim Wren and Angela Cruseturner for their leadership of this program, our faculty and staff, and to the scores of volunteers who have contributed their time and talents to make this program a success,” she added.

Upon announcing Baylor Law’s award, the ABA’s Standing Committee on Professionalism stated, “The Committee was impressed by the robust program and its strong emphasis addressing various practical aspects of professional development, including law practice management, client counseling, technology, as well as the importance of well-being.” They added, “The Standing Committee on Professionalism commends Baylor Law for implementing an effective program well worthy of emulation throughout the nation.”

“We are so pleased by the Committee’s recognition of Baylor Law’s hard work and dedication. We also know that this program could never function without the many lawyers, judges, and other professionals who have so graciously volunteered their time to be a part of this program and who share their knowledge and experience with our students.” said Angela Cruseturner.

The [ABA's] Standing Committee on Professionalism commends Baylor Law for implementing an effective program well worthy of emulation throughout the nation.”

Baylor Law’s intense investment in students’ career success is paying dividends. In the most recent employment data reported to the ABA, for the Class of 2017, 82.3% of graduates obtained positions that met the “gold standard” requirements of long-term, full-time, bar passage required, and not funded by the law school. That number was the best out of the ten Texas law schools and ranked 18th highest in the nation. In a rolling average of the past three years of data, 2015 – 2017, Baylor Law ranks 16th in the nation. 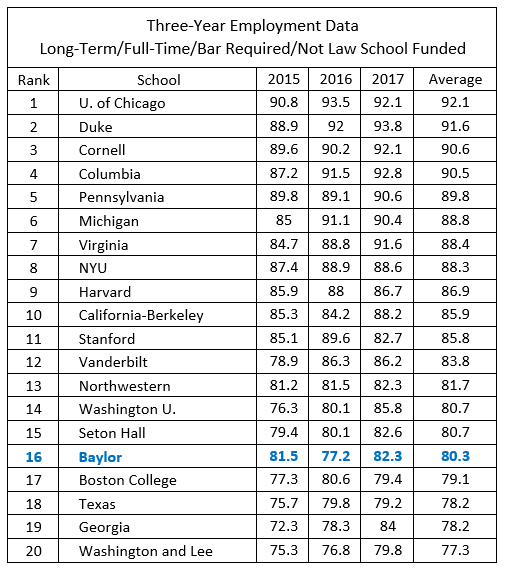 The Gambrell Professionalism Awards were established in 1991, and are named for the former ABA and American Bar Foundation president from 1955 to 1956. Gambrell founded the Legal Aid Society in Atlanta, where he practiced law from 1922 until his death in 1986. Since 1991, the ABA has selected from one to three entities in the United States each year as a recipient of the Gambrell Award.