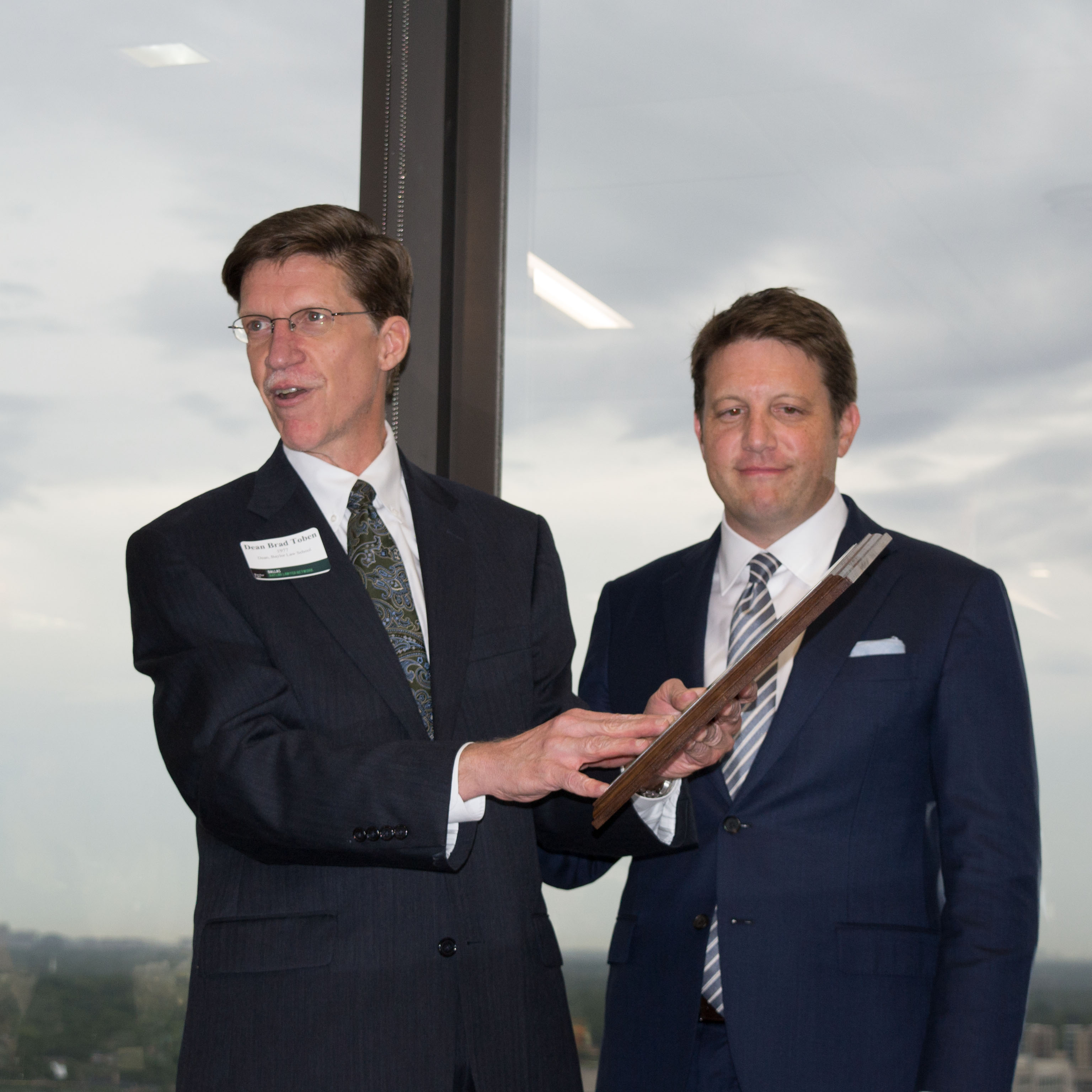 “So many of my mentors are Baylor lawyers. Judge Ed Kinkeade met me as a law student and molded me to be the Christian, father, and lawyer I am today. Mike Cash, Bill Jones, and Jack Ayres judged my advocacy competitions, hired me after law school, and taught me how to try cases. I will forever be indebted to Baylor Law for what it did for me personally and professionally.”

The Young Lawyer of the Year Award was created in 1995 to recognize an outstanding Baylor Lawyer under the age of 40, who has brought honor and distinction to Baylor Law and to the legal profession. Recipients of the award are selected by the Executive Committee of the Baylor Law Alumni Association.

I will forever be indebted to Baylor Law for what it did for me personally and professionally.”
–Judge James M. Stanton

“Judge Stanton exemplifies the qualities we try and instill in every Baylor Lawyer,” stated Dean Brad Toben, “He practices with a servant’s heart and leads in each venue of life in which he is placed.”

Over the course of his career as an attorney and judge, Stanton has been involved in more than 100 trials and countless hearings. He previously served as presiding judge of the 134th Judicial District Court in Dallas County, Texas, and practiced in the trial sections at Andrews Kurth LLP and Cozen O’Connor PC. In 2013, he founded his current firm, Stanton LLP, which is comprised of 14 lawyers, including 6 Baylor lawyers. He is board certified in Civil Trial Law and Personal Injury Trial Law by the Texas Board of Legal Specialization. In 2017, Stanton LLP was honored by Benchmark Magazine as a Recommended Firm, and Stanton was identified as a Litigation Star and designated on the 40 & Under Hot List for his litigation work. D Magazine also identified Stanton as one of the preeminent attorneys in Dallas.

Stanton serves as a lay leader in his church, The Grove, a campus church of Highland Park United Methodist Church, and he is on the Board of Trustees for Uplift Education. Stanton’s children – Alexandra, Luke, Eric, and Caroline - attend Uplift North Hills Preparatory.

About the Young Baylor Lawyer of the Year Award

The Baylor Young Lawyer of the Year Award is given annually to an outstanding alumnus/a who has brought honor and distinction to the Law School and to the legal profession. The recipient must not reach age 41 before Jan. 1 of the award year. Recipients are selected based upon the following criteria:

To Nominate a Young Baylor Lawyer of the Year:

Baylor Law School will accept nominations for the 2019 Young Baylor Lawyer of the Year through December 1, 2018. The Executive Committee of the Baylor Law Alumni Association will review a resume and the first three letters received for each nominee.

To submit a nomination for the 2019 Young Baylor Lawyer of the Year, please send a nomination letter describing why the nominee meets the below criteria to:


ABOUT BAYLOR LAW
Established in 1857, Baylor Law was one of the first law schools in Texas and one of the first west of the Mississippi River. Today, the school has more than 7,400 living alumni. It is accredited by the American Bar Association and is a member of the Association of American Law Schools. Baylor Law has a record of producing outstanding lawyers, many of whom decide upon a career in public service. Baylor Law boasts two governors, members or former members of the U.S. House of Representatives and the U.S. Senate, two former directors of the FBI, U.S. ambassadors, federal judges, justices of the Texas Supreme Court and members of the Texas Legislature among its notable alumni. In its law specialties rankings, U.S. News & World Report ranked Baylor Law’s trial advocacy program as one of the top 5 in the nation. Baylor Law School is also ranked #50 in the magazine’s 2019 edition of "America’s Best Graduate Schools." The National Jurist ranks Baylor Law as one of the "Best School for Practical Training," and #4 in the nation in its most recent "Best Law School Facilities" listing. The Business Insider places Baylor Law among the top 50 law schools in the nation. Baylor Law School received the 2015 American Bar Association Pro Bono Publico Award, making it only the third law school in the nation to be honored with the award since the award's inception in 1984. Learn more at baylor.edu/law