Philip Pasquarello of Drexel University Kline School of Law was declared the winner of Baylor Law's 2018 Top Gun National Mock Trial Competition on June 3rd in Waco, Texas. Pasquarello persuaded a jury of experienced trial attorneys to return a verdict in his favor at the end of the competition's intense final round, beating out runner-up, Eric Fleddermann of University of Michigan Law School. In addition to bragging rights as 'Top Gun,' Pasquarello won the grand $10,000 prize, and an addition $1,000 prize for also winning the damages portion of the competition. 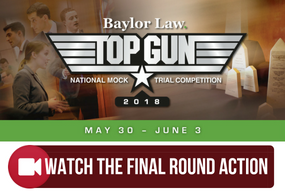 "This is the best mock trial competition in high school, college or law school. This is the one I look forward to every year, and to be the winner of the competition is surreal," Stated Pasquerello after being declared the 2018 Top Gun, and added, "This is a competition that's not like any other competition, not only the short preparation time, but the nature of the case is very near to a real case." 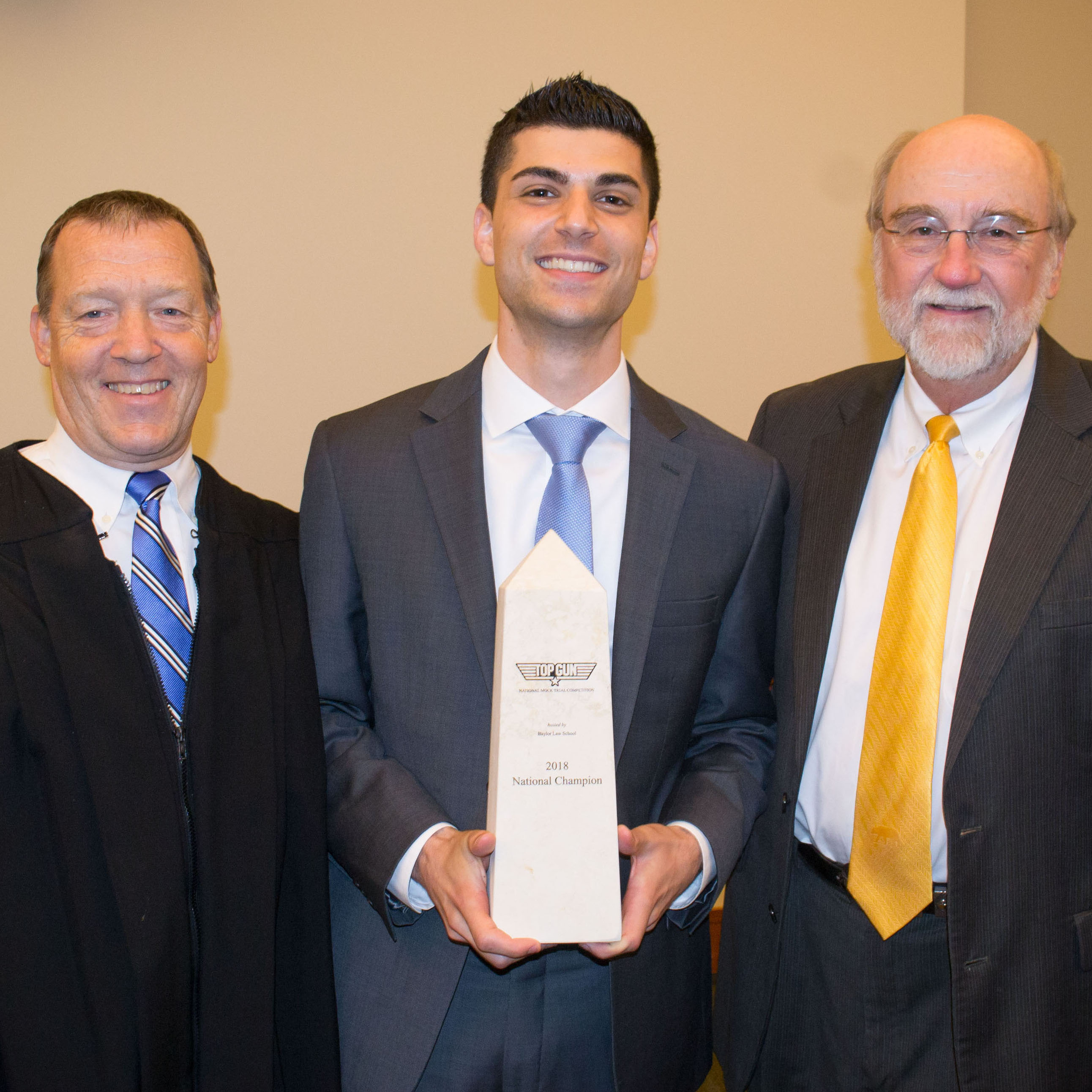 Challenging and innovative rules set the Top Gun competition apart from other national other mock trials. Competitors are not able to prepare for the case prior to the start of the competition. Once they arrive at Baylor Law, the competitors are given a case file and only 24 hours to prepare before competing in the first rounds. The case packets contain depositions, records, photographs, and videos. Witnesses are provided and the competitors have only a short period of time to work with and prepare them, for the round. As the tournament progresses, new pieces of evidence or additional witnesses are introduced, further challenging the competitors. The jurors for each round are practicing trial lawyers and justices. The presiding judge in the semi-final round of the competition was Baylor Lawyer of the Year Honorable J. Rodney Gilstrap, Chief District Judge of the U.S. District Court for the Eastern District of Texas. The presiding judge in the final round was the Honorable Alan D. Albright, recently nominated as U.S. District Judge of the Western District of Texas, Waco Division.

This year's fictitious case, with facts created by faculty and staff at Baylor Law, focused on a trade dispute between two Waco breweries – Bare Arms Brewery and Brotherwell Brewing. Both are producing a wildly popular beer derived from a secret family recipe using unique ingredients that abound in Central Texas – cedar and prickly pear cactus. But Brotherwell is a late-comer to this scene and has taken over the market. Bare Arms is alleging that Brotherwell stole their trade secret recipe that's the key to Brotherwell's success. Brotherwell, of course, claims that there was no trade secret and that they legitimately bought their recipe from a different family member – they're doing better than Bare Arms simply because their beer is better. In the final round, Fledderman represented the plaintiff, Bare Arms Brewery, and Pasquarello successfully represented the defendant, Brotherwell.

Gerald R. Powell, the Abner V. McCall Professor of Evidence Law at Baylor Law and one of the drivers of the creation of the Top Gun Competition, stated, "I'm very proud of the Baylor team. From law students who did such diverse tasks as drafting witness depositions to playing witness roles to driving competitors back and forth from the hotel; from faculty members who consulted with us on the law or played the role of witnesses in the trials; from staff who created beautiful still and video images to those who provided good old-fashioned Texas hospitality; this was a wonderful team effort. I feel so lucky to work with them."

The 2018 Top Gun National Mock Trial Competition was underwritten by Naman, Howell, Smith & Lee, PLLC, and sponsored by Weinberg Wheeler Hudgins Gunn & Dial. Thank you to T-Bones Barbecue and TrialPad for their support during the competition. 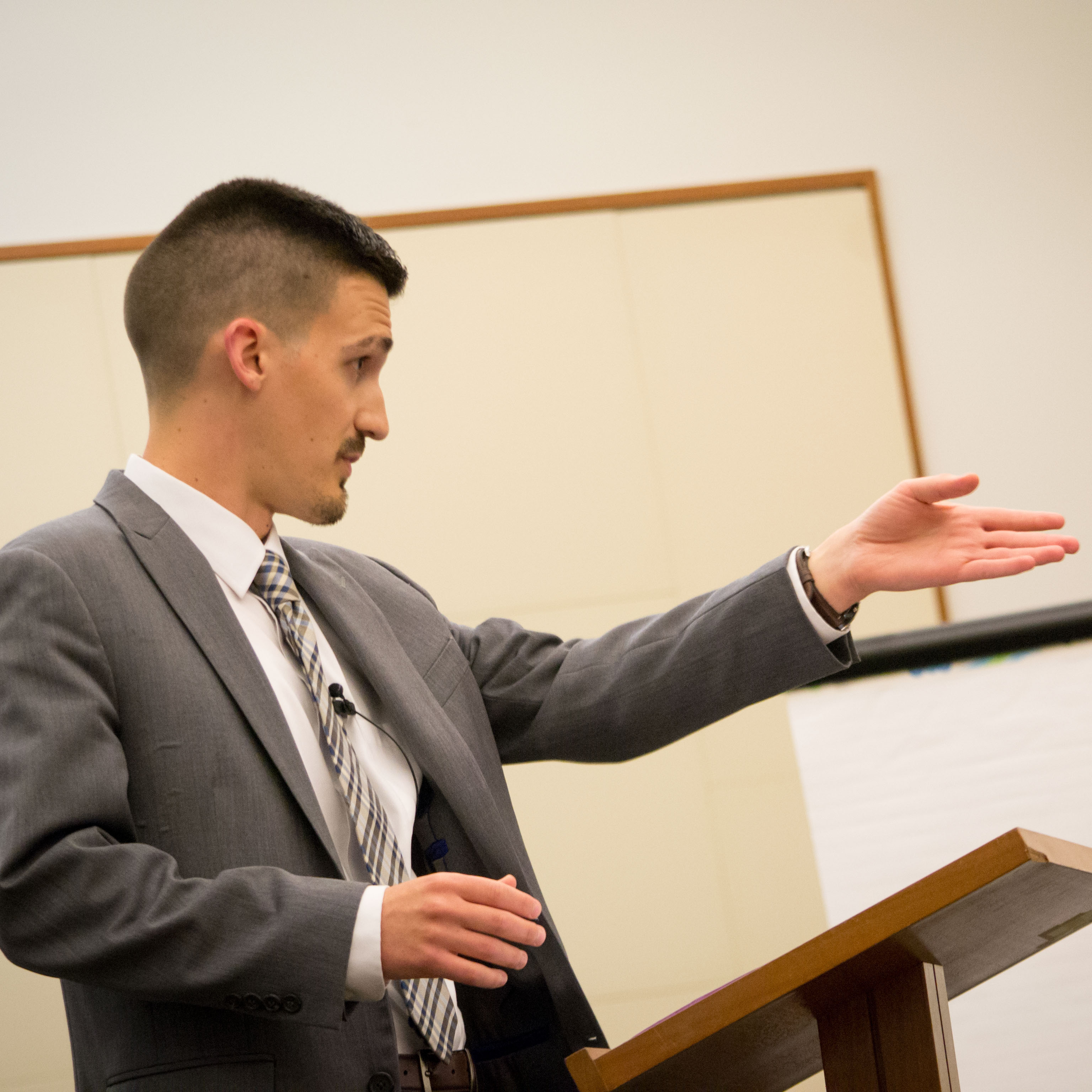 Top Gun runner-up, Eric Fleddermann of University of Michigan Law School, makes a point during the final round.

Baylor Law School gives a special thanks to Bare Arms Brewery and Brotherwell Brewing for their support. While the facts in this case are entirely fictional, Bare Arms and Brotherwell were incredible partners in making this year's case a reality.

The University of Akron School of Law - Cassandra Rosa