A Night to Celebrate 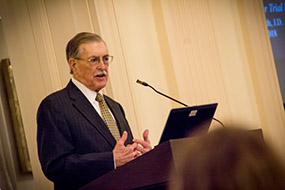 William R. McLeRoy shares about his family's passion for education

The ceremony is named in honor of John William Minton and Florence Dean Minton. Their daughter, the late Polly Minton McLeRoy of Sherman, Texas, established and endowed a lecture series in 1993 to honor her parents. More recently, McLeRoy's son, William McLeRoy, endorsed the concept of a student awards ceremony to honor the memory of his grandparents and their lives' work, and at which current Baylor Law students would be addressed by a notable, inspiring speaker. At the ceremony, Baylor Law honors students for academics, advocacy, Baylor Law Review, and pro bono and public service. 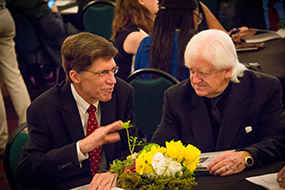 "Each year we pause at the annual Student Awards Ceremony to honor our students for their achievements in academics, advocacy, leadership, and service. Our students work tirelessly in their education and training to develop themselves into Baylor Lawyers." Stated Dean Brad Toben. He added, "This ceremony is an apt moment for my colleagues and I to affirm to them that they indeed have accomplished so much, and that they have made us proud in their continuing journey toward service as a Baylor Lawyer."

Attorney Darrell Lee Keith, founder of the Keith Law Firm, P.C. in Fort Worth addressed more than 200 students, faculty, staff, alumni, and guests who attended the ceremony at the Barfield Drawing Room in the Bill Daniel Student Union Building on the Baylor University campus. Darrell Lee Keith is a double-Baylor graduate (B.A. '68, J.D. '70) who has distinguished himself as a plaintiff's trial lawyer who has achieved many million-dollar verdicts and settlements for innocent victims of malpractice and other tortious conduct. 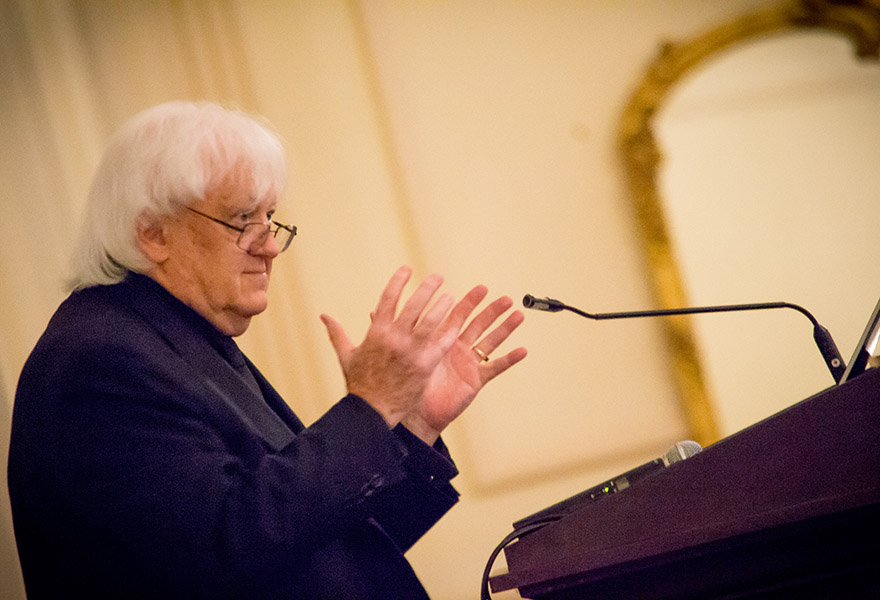 Keith spoke of the importance emulating Atticus Finch's integrity, courage and compassion in order to become good stewards of the law. He reiterated their obligations as attorneys under Cosgrove v. Grimes, and emphasized the importance of their reputations as Baylor Lawyers. "You build your reputation one encounter at a time, one transaction at a time, one telephone call, one hearing, one trial, one legal service." He reminded students, and added "Make no mistake, you will either earn a good reputation, and it will bring respect, personal satisfaction, and professional reward, or it will take you down."

For the last 25 years, the award ceremony and lecture series has featured engaging speakers and inspiring visionaries whose keynote addresses have encouraged thousands of Baylor Law students. Previous speakers include Anthony Bruster of the Albritton Law Firm; the Honorable Kay Bailey Hutchison, United States Senator; Noley Bice, retired General Counsel for Baylor University; the Honorable Ed Kinkeade, Federal Judge for the United States District Court for the Northern District of Texas; and the honorable Ann Richards, governor of the State of Texas, among others. 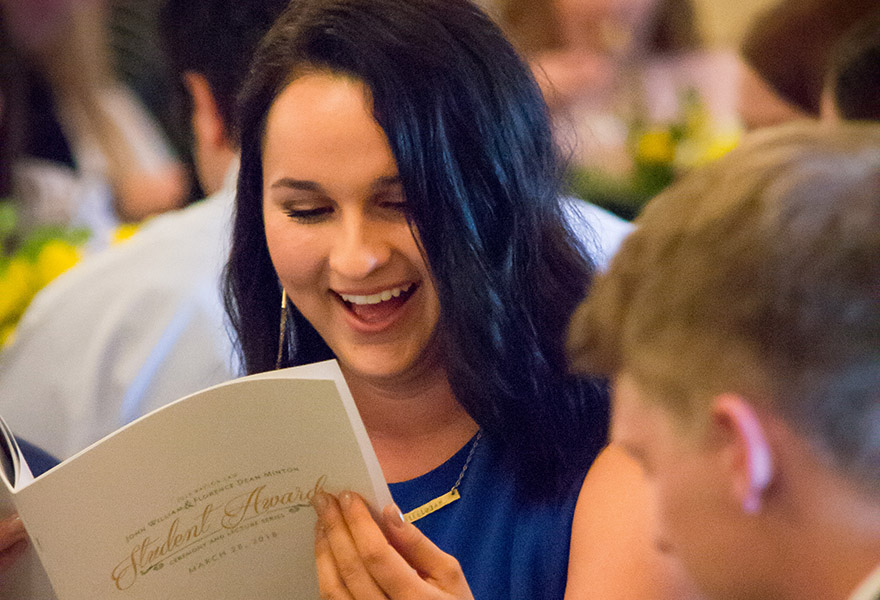 Among the almost 100 accomplishments recognized this year, seven Baylor Law students were honored for each having completed over 225 hours of pro bono and other service work during their time at Baylor Law. Pro bono programming at Baylor Law is aimed at exposing students to practical legal experiences while empowering them to serve our community. Baylor Law understands that service is at the heart of the legal profession, and strives to produce attorneys who are not only successful in the practice of law, but who also lead by example. 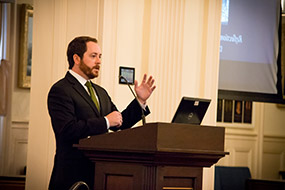 Presenting these Platinum Level awards, Assistant Dean Stephen Rispoli stated "Lawyers have a responsibility to seek opportunities to make a positive difference in their communities. A recent study shows that when faced with challenging legal problems only 22% of Americans ask for help outside of their social circle. Only 8% go to the legal system for help; only 8% seek the help of lawyer. The vast majority choose to do nothing. This inaction could be the result of lack of resources, lack of understanding of the depth of the situation, or simply that they do not believe the system is made for them or their problems. Regardless of the reason, every time that this happens, faith in our rule of law system erodes." He added "Whenever a lawyer volunteers to take a pro bono case or as a public servant, that lawyer is helping ensure that our system of democracy is protected and the goal of access to justice for all is a little closer to becoming a reality. The students being recognized for their pro bono and public service tonight truly exemplify the spirit of servant leadership." 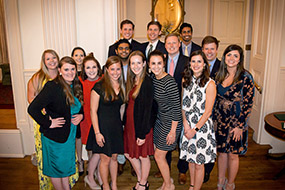 Public service and pro bono opportunities at Baylor Law include: 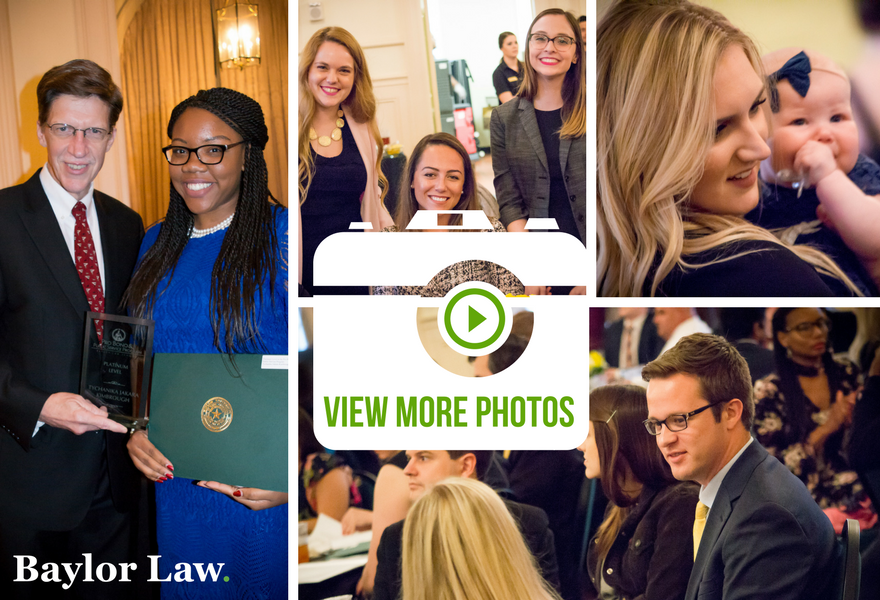 *Baylor Law students and their families are authorized to download and distribute photos taken of themselves or their family during the Award Ceremony. The download or distribution of photos of others without their consent is prohibited.

ABOUT BAYLOR LAW
Established in 1857, Baylor Law was one of the first law schools in Texas and one of the first west of the Mississippi River. Today, the school has more than 7,400 living alumni. It is accredited by the American Bar Association and is a member of the Association of American Law Schools. Baylor Law has a record of producing outstanding lawyers, many of whom decide upon a career in public service. Baylor Law boasts two governors, members or former members of the U.S. House of Representatives and the U.S. Senate, two former directors of the FBI, U.S. ambassadors, federal judges, justices of the Texas Supreme Court and members of the Texas Legislature among its notable alumni. In its law specialties rankings, U.S. News & World Report ranked Baylor Law's trial advocacy program as one of the top 5 in the nation. Baylor Law School is also ranked #50 in the magazine's 2019 edition of "America's Best Graduate Schools." The National Jurist ranks Baylor Law as one of the "Best School for Practical Training," and #4 in the nation in its most recent "Best Law School Facilities" listing. The Business Insider places Baylor Law among the top 50 law schools in the nation. Baylor Law School received the 2015 American Bar Association pro bono Publico Award, making it only the third law school in the nation to be honored with the award since the award's inception in 1984. Learn more at baylor.edu/law