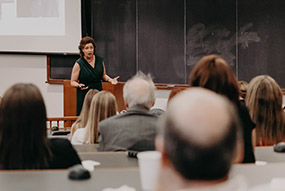 On Friday, March 23rd, Baylor Law and LEAD Counsel welcomed Kirsta Melton, Deputy Criminal Chief of the Human Trafficking and Transnational/Organized Crime Section of the Office of the Texas Attorney General, who shared information on human trafficking in Texas and across the globe, and how to recognize the potential red flags and indicators of human trafficking.

These lives, messy though they may be, are worth it. (Kirsta Melton,Deputy Criminal Chief of the Office of the Texas Attorney General, describing why she fights to end human trafficking).

Participants received a handout on ‘Human Trafficking Red Flags’ and were asked to promote “Be the One, in the Fight Against Human Trafficking” video from the office of the Attorney General of Texas. We’re embedding that video, here: