Headline from Spring, 2018 Issue of The National Jurist

Baylor Law's Gracie Wood has been named one of National Jurist magazine's "Law Students of the Year." The designation recognizes Wood and 20 other law students from across the country who excel in leadership, focus, and commitment to justice. 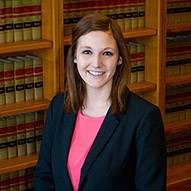 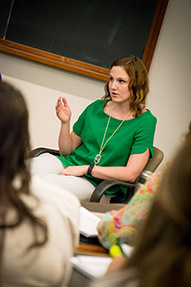 Wood serves as the Executive President of the Student Bar Association, Executive Editor of Baylor Law Review, and President of the Public Interest Legal Society. Wood's true passion is advocating on behalf of abused and neglected children. She has served a Court Appointed Special Advocate (CASA) for four years. Her strong belief in the work of CASA and her passionate advocacy has encouraged nearly 20 other Baylor Law students to join her as CASA volunteers. In addition to excelling in her academic achievements, Wood, who plans to work with Friday Milner Lambert Turner PLLC, a family law firm located in Austin, TX, has contributed over 500 hours of pro-bono services during her time at Baylor Law.

Associate Dean and Professor of Law Leah Witcher Jackson Teague says of Wood, "Gracie Wood is the epitome of the Baylor Lawyer that we strive to foster—a service-oriented, hardworking leader committed to excellence. Any one of her student leadership positions would be a significant responsibility on top of the heavy workload of Baylor Law students. The fact that she is in senior leadership positions in three student organizations is astounding." She added, "Gracie is a pleasure to partner with in any endeavor. Her attention to detail and determination to get the best possible outcome is admirable. We cannot imagine a more deserving student to be recognized as Law Student of the Year."

Gracie Wood is the epitome of the Baylor Lawyer that we strive to foster—a service-oriented, hardworking leader committed to excellence. (Leah Teague, Baylor Law).

"I'm thankful for all of the opportunities I have been given at Baylor Law."
-Gracie Wood

"I'm thankful for all of the opportunities I have been given at Baylor Law and the support I received when trying to implement positive change. I know these experiences will help me going forward with my career and future involvement with my local bar and community." Wood stated. She added, "When attempting to decide what path I should take, last summer as I was about to begin my third year of law school, I pulled out the personal statement I wrote to be admitted to law school. Reading those words, I realized family law has always been what I am passionate about, and the reason I came to law school to begin with. Through my upbringing, personal experiences, and involvement with CASA, I believe I have been equipped with a skillset that particularly lends itself to practicing family law. I want to be help empower people during extremely difficult and emotional times in their lives."