On Friday, March 2nd, Baylor Police Department Chief, Brad Wigtil surprised student Shaina Hayes, 3L, with a Community Meritorious Service Award at a brief ceremony at the end of her Employment Relations class. Shaina was honored by the Baylor University Police Department (BUPD) following a four-month internship with the department where she worked in partnership with human resources, general counsel, and the department's Accreditation Board, the International Association of Campus Law Enforcement Administrators, to completely revamp the department's Policy and Procedures manual. 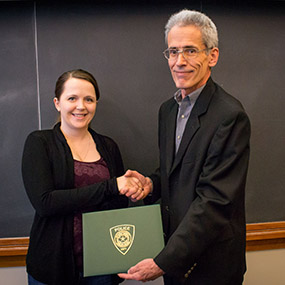 "Shaina's experience coordinating the efforts of multiple national, military and political officials during her time in the U.S. Army in Afghanistan gives her a unique perspective on the importance of organized, well-written, policies. This experience, combined with Baylor Law's emphasis on effective legal writing and research made Shaina uniquely qualified to rewrite the BUPD's policies," stated Baylor Law's Associate Dean, Leah Teague. She added, "We're so proud of Shaina both for her military service and her service to the BUPD."

Chief Wigtil said of Shaina's work., "Shaina, you've knocked it out of the park. I've looked at other departments' policies and procedures, we now have the gold standard policies in the area of personnel."

Congratulations Shaina on this special honor.