Dallas attorney Lewis R. Sifford, J.D. '72, received the Lifetime Achievement Award from the American Board of Trial Advocates (ABOTA) at the organization's Board of Directors meeting in San Francisco in January. 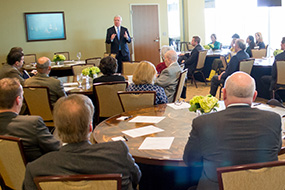 Sifford teaching a CLE workshop at the Baylor Club in 2017

The award is given to professionals who "whose leadership efforts have advanced the preservation of the right to trial by jury guaranteed by the Seventh Amendment to the U.S. Constitution," according to a press release from the association. It's the highest honor bestowed by the association, and has been awarded only nine times in the organization's 65-year history.

In addition to the ABOTA Lifetime Achievement Award, Mr. Sifford will be honored by the Dallas Bar Association as a "Texas Legal Legend" in April.

Since graduating from Baylor Law in 1972, Mr. Sifford has tried more than 150 civil jury trials to verdict, served as an arbitrator in complex securities cases and disputes involving pharmaceuticals and medical devices, participated in over 175 trial demonstrations in 26 states for the National Institute of Trial Advocacy and ABOTA, served as ABOTA president both in Texas and at the national level, and has served on multiple committees for the Texas Bar Association. He has been named a 'Texas Super Lawyer' by Texas Monthly Magazine and 'The Best Lawyers in Dallas' by D Magazine on multiple occasions.

He has also dedicated his time to educating and preparing future attorneys. He served as an adjunct professor of trial advocacy at the Southern Methodist University - Dedman School of Law for 20 years, and taught several Continuing Legal Education courses and presentations for the American Bar Association, the State Bar of Texas, here at Baylor law, and with many other institutions. Lewis currently serves as a Jaworksi Fellow at Baylor Law and is past-president of the Baylor Law Alumni Association.

Lewis R. Sifford speaks compellingly to the truth that we all as lawyers have an obligation to advocate for the preservation of our sacred Seventh Amendment rights to trial by jury - Baylor Law Dean, Brad Toben.

Brad Toben, Dean of Baylor Law says of Lewis R Sifford and his accomplishments, "Lewis Sifford is the paradigm not only of the gifted trial lawyer – a noble calling - but he also has deep and abiding love and concern for our profession. Lewis speaks compellingly to the truth that we all as lawyers have an obligation to advocate for the preservation of our sacred Seventh Amendment rights to trial by jury. The jury, despite the attacks upon it in recent years and decades, remains a bulwark of our Constitutional system, a bulwark that protects against the scales being weighted unfairly in favor of moneyed and privileged parties." Toben added, "Every trial lawyer only wants his or her client to have open access to our courts and a level playing field in the courtroom in front of a jury. Lewis is a clear and articulate voice for that truth. He has advanced our constitutional rights with fervent and consistent leadership in and beyond the profession."

Sifford teaching a CLE Session at Baylor Law in 2017