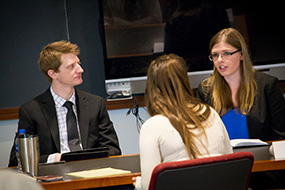 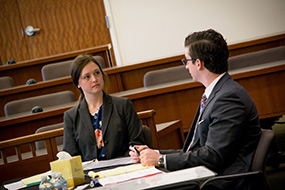 Facing twelve opposing teams, the two Baylor Law teams competed in the Region 5 competition in Tampa February 16-18, while at the same time, Baylor Law was host to the Region 11 competition that included law schools from across Texas, Denver, and Chicago.

Coach and Adjunct Professor Vik Deivanayagam, judge of County Court at Law #1 in McLennan County, Texas, stated, "The competition itself is unique in nature because it asks students to exercise skills outside of the normal law school curriculum. They must combine their knowledge of the law in a particular field, as well as exhibit interpersonal skills in an informal setting, from interviewing a client that walks in the door, to providing empathy and guidance for that person's situation. The teams invest a considerable amount of time researching and practicing, and I am proud of both teams and the student-coaches."

"The teams invest a considerable amount of time researching and practicing, and I am proud of both teams and the student-coaches."
-Vik Deivanayagam, Team Coach
He added, "As a team, Ms. Smitherman and Mr. Gambrell exhibited a real chemistry that cannot be taught. Both are excellent listeners who have the ability to quickly process information as they are receiving it. Their ability to act natural in a completely unnatural setting is credit to their preparation and practice habits. While I understand winning is the goal of any competition at this level, I consider their performance as finalists to be a success and credit to the law school." Vik Deivanayagam has coached Baylor Law's Client Counseling teams for the last decade.

According to the ABA Law Student Division, the competition is designed to promote 'greater knowledge and interest' of preventative law and to encourage students to develop the necessary skills to be effective counselors when working with their clients.