On January 11-14, students from ten of the most accomplished transactional law programs in the country gathered at Baylor Law to participate in the 2018 Transactional Law competition: The Closer. 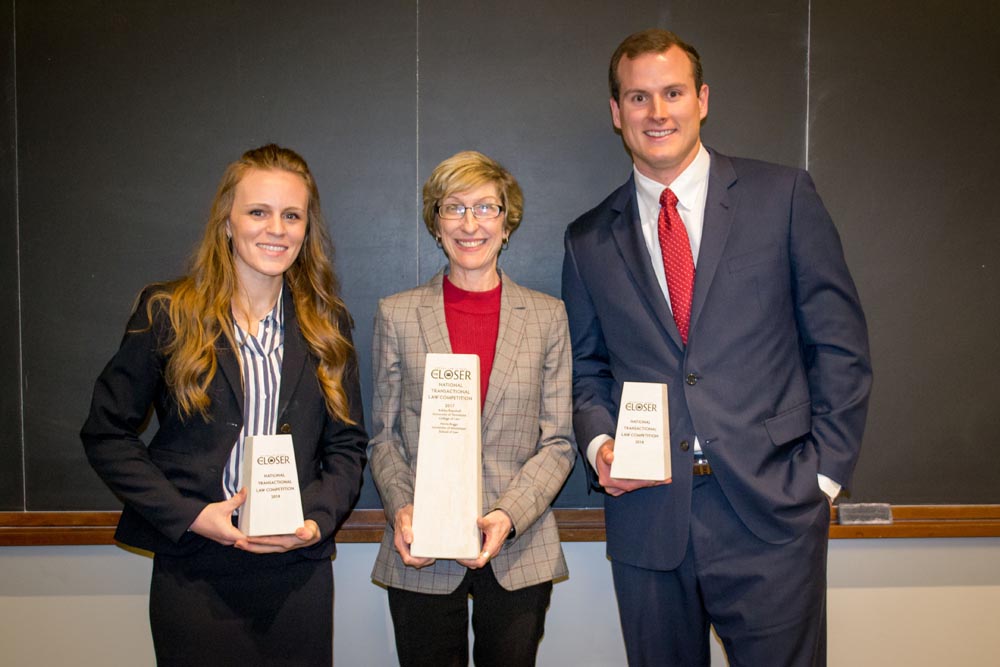 The Closer winners Ericha Penzien from the American University, Washington College of Law and Brian K. Adams from the University of Tennessee College of Law, with Baylor Law Professor Elizabeth Miller, creator of The Closer.

The Closer is an invitation-only competition open to schools that have excelled at past National Transactional LawMeets®. Students from participating schools vied to win one of two $5,000 top prizes and bragging rights as a top closer. The annual competition, another example of Baylor Law's commitment to training practice-ready attorneys, provides hands-on exposure to one of the most important aspects of corporate law: contract markup and negotiation.

The Closer competition is unique in that the details of the contract that participants will need to negotiate are only disclosed twenty-four hours prior to the first round of negotiations. The tight timeline forces competitors to identify the legal issues and devise and negotiate solutions that best serve their client's particular needs with the efficiency required of lawyers under realistic time constraints.

In this year's competition, participants negotiated a hypothetical loan agreement between Waco Hippodrome, Inc. (owner of the Waco Hippodrome Theatre, a beautiful historic theater in downtown Waco that operates as a multi-purpose entertainment venue) and Theater Funding, LLC, a fictional niche lender proposing to refinance the Hippodrome Theatre's loan. During the competition, participants made a site visit to the Waco Hippodrome Theatre, held a meeting with their client, and reviewed a large client file, including digital correspondence, drafts of the loan agreement, research, phone notes, and other relevant information in an effort to reach a final contract that was agreeable to both parties.

Through a series of 40-minute rounds of negotiations in front of experienced transactional lawyers, competitors are judged on their presence and professionalism, knowledge of legal and financial issues, and their efficacy in finding creative solutions to reach an agreement that satisfies their client's objectives while under strict time constraints. Keeping pressure on the competitors, breaking developments and new information from their clients are introduced to the finalists on the night before the final round.

"Professor Miller and all of the organizers cared about the competitors and [made] this a very real transactional experience; something that we would experience in the real world," commented Ericha Penzien who added "I'm just so appreciative to Professor Miller and everyone here at Baylor University for this opportunity. I think I've learned a lot throughout the competition and it was a rewarding experience for me."

"It's a tremendous blessing- I've been nothing but impressed with the Baylor Law staff and everybody that has contributed […] I'm really grateful for the opportunity," stated Brian K. Adams, Jr. and added, when asked what most stood out for him: "The level of competition from my peers… we had people from all over the country, I felt that all were well-deserving of the award and just the opportunity to compete with them and learn from them was a tremendous opportunity and it's something I look forward to carrying with me in my career."

"I was fortunate to be able to judge for The Closer competition. The quality of the format, problem and competitors was very impressive. The problem was very "real life" in that it provided at least 5 hours of negotiating material, however the students were charged with prioritizing their discussion points within a shorter time frame. Often in the real world you are pressed on time," stated Scott Wallace, Executive Partner of the Dallas Office of Holland & Knight LLP, and one of the judges of the negotiation rounds for the 2018 competition. "The students were extremely well prepared and had learned a lot in negotiating skills. I was so impressed with the competitors and we plan to interview one of them for a summer clerkship position with our firm. The skills these students are learning and developing are what will make them more valuable in the marketplace - initially in the search for their first job and further into their career."

JUDGES SCORING THE FINAL ROUNDS WERE:

BAYLOR LAW SCHOOL SINCERELY APPRECIATES THOSE WHO INVESTED IN THE CLOSER:

Click here to view more photos from this year's The Closer