Allison Dickson, JD '07, has been named the 2017 Young Baylor Lawyer of the Year.


A Bold Journey of Faith and Perseverance

Allison Dickson's journey of faith, perseverance, and hard work has led her to be an exemplar on how to live life. "Allison's courage and tenacity inspires each of us in the Baylor Law family to always look beyond adversity to accomplish our goals," Dean Brad Toben said. "I am beyond proud of Allison for her accomplishments, and I am pleased to award her as the 2017 Young Baylor Lawyer of the Year. She richly deserves this high honor."

Baylor Law School Dean Brad Toben, Dean Leah Teague, Professor Tom Featherston, Professor Jerry Powell, Professor Elizabeth Miller, Office Manager and Special Events Coordinator Meredith Meyer, Sr. Director of Development Susan Wommack, and Director of Alumni Relations Berkley Knas surprised Dickson with the 2017 Young Baylor Lawyer of the Year award on May 23 at her home in Temple, Texas. Anne Potts Jackson, president of the Baylor Law Alumni Association, presented Dickson with a plaque on behalf of the Executive Committee of the Association. Dickson and her mother, Johnnie (who had been in on the surprise) shed tears of joy and excitement as Dickson was completely surprised by the honor. Dickson gives much credit to her mother and late father, Joe, who are the epitome of parental love, sacrifice, and devotion.

Turning a Dream into a Reality 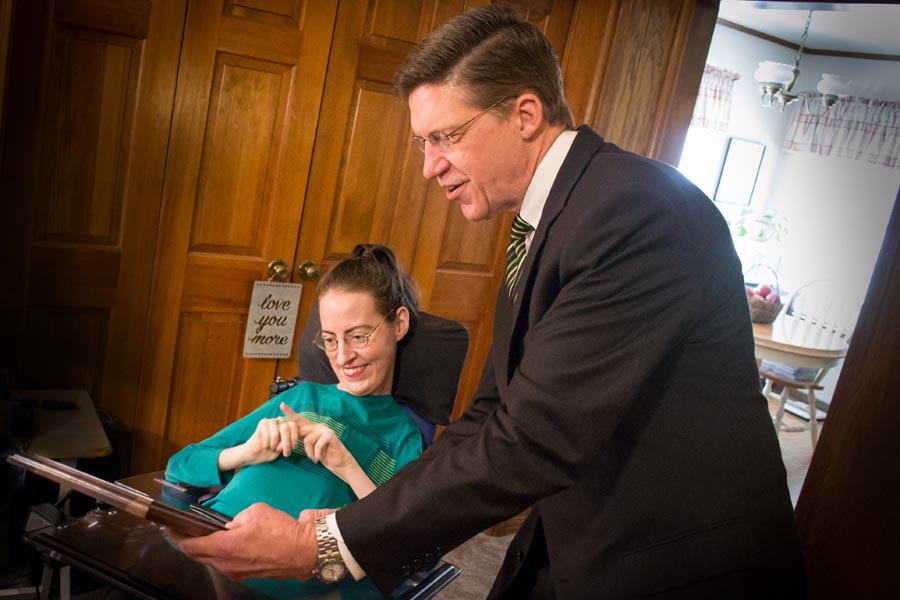 Dean Toben and Allison Dickson look over the 2017 Young Baylor Lawyer of the Year plaque.

"If you have not met Allison, after meeting her your life will never be the same," classmate Ethan Lange, JD '07, said. "Her sparkplug spirit is contagious, and her never-give-up attitude will force you to reevaluate the things in life we may grumble about without thinking."

One of Dickson's dreams has been to leave her legacy at Baylor Law School through an endowed scholarship. In order to do so, she needed to raise $50,000 within five years. Dickson's tenacity prevailed, once again, and she raised over $50,000 in less than nine months. The Allison Dickson Baylor Law Endowed Scholarship Fund was established in 2016. 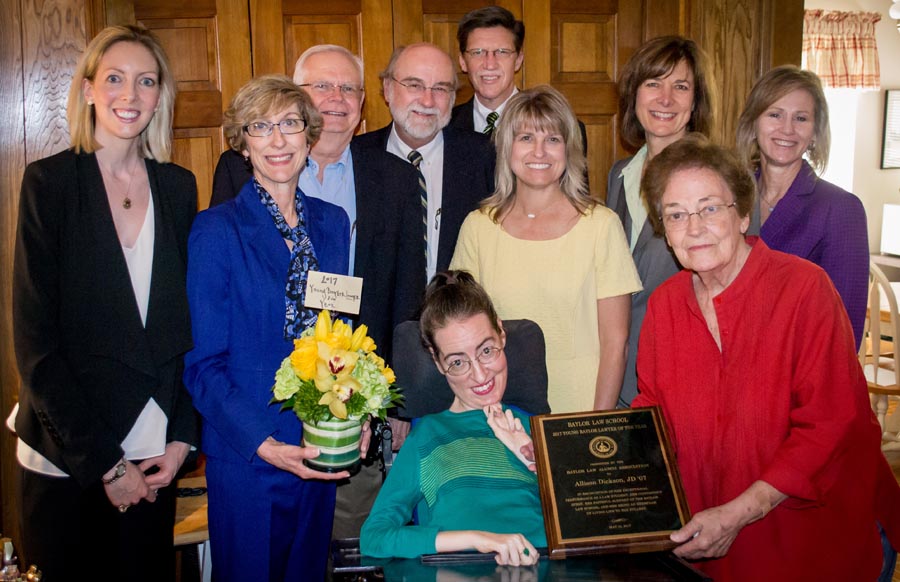 About the Young Baylor Lawyer of the Year Award

The Baylor Young Lawyer of the Year Award is given annually to an outstanding alumnus/a who has brought honor and distinction to the Law School and to the legal profession. The recipient must not reach age 41 before Jan. 1 of the award year. Recipients are selected based upon the following criteria:

To Nominate a Young Baylor Lawyer of the Year:

Baylor Law School will accept nominations for the 2018 Young Baylor Lawyer of the Year through December 1, 2017. The Executive Committee of the Baylor Law Alumni Association will review a resume and the first three letters received for each nominee.

To submit a nomination for the 2018 Young Baylor Lawyer of the Year, please send a nomination letter describing why the nominee meets the below criteria to: