Baylor Law's Viewpoints™ program on emerging trends in intellectual property litigation at the trial and appellate levels unfolded on April 7 in Washington, D.C.

"Patent litigation is a high stakes arena," said Baylor Law Dean Brad Toben. "The Department of Commerce reports that over 45 million jobs in the U.S. depend upon the economic value of intellectual property.1 In this edition of our Viewpoints™ program, we have brought together high profile and distinguished panelists to discuss developments and trends in patent litigation. The setting of Baylor Law's Viewpoints™ conversation series in Washington, D.C. is an extension of our mission to engage in the profession in the context of the current and emerging issues that define it." 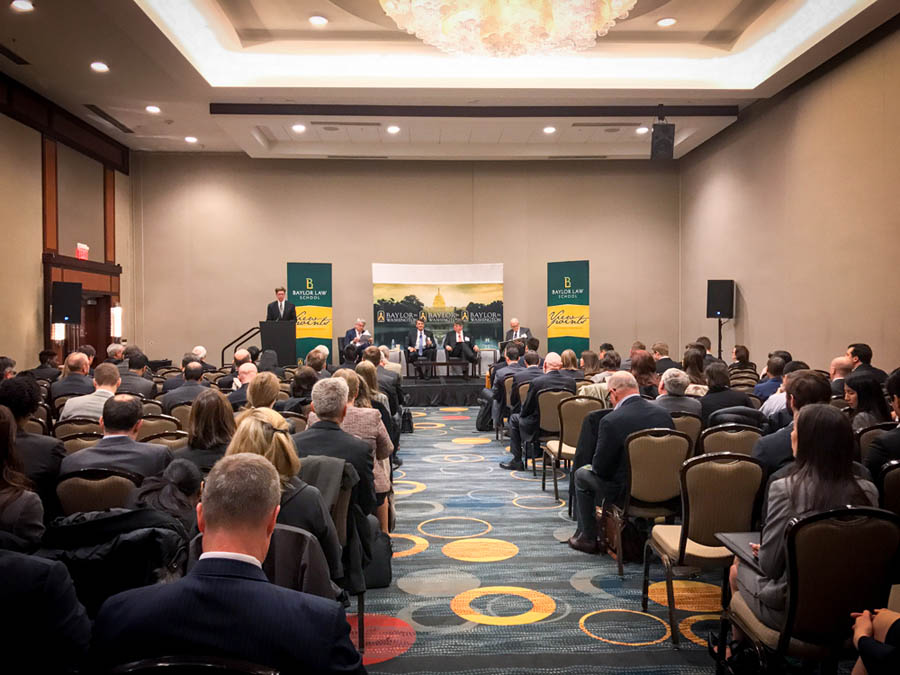 Toben continued, "This Viewpoints™ program received across the board praise from the large audiences at each panel session and from the presenters. We owe a debt of gratitude to Judge Rodney Gilstrap of the U.S. District Court for the Eastern District of Texas, who presides over approximately twenty-five percent of all patent litigation in the nation. Judge Gilstrap was at the center of our efforts to secure all-star panelists from among national patent litigators, federal judges who have extensive patent dockets, and the judges of the Federal Circuit Court of Appeals to whom all patent appeals are made."

Intriguing Discussions on Issues and Trends in Patent Litigation

The first panel of high profile patent litigators discussed case management in complex intellectual property litigation. Patent cases are both complex and challenging for trial counsel. With complex issues and substantial potential damages at stake, pragmatic, efficient and effective case management plans are essential. The panel discussed an array of current and developing issues, including trends bearing upon case assessment, pretrial discovery and motion practice, and plaintiff and defense trial strategies and tactics.

The second panel, composed of four U.S. District Court judges who have substantial patent dockets, shared their perspectives from the bench on docket management and control, motion practice, discovery disputes, the use of local counsel, the function of the jury in patent litigation, and the role of law clerks in their courts. The panelists also discussed the concepts of proportionality in discovery practice and claim construction determination. The opportunity that counsel have to assist in the development of their junior colleagues by allowing them to play active roles in the courtroom also was discussed.

In the final panel, the Chief Judge of the Federal Circuit Court of Appeals and three of her colleagues from the Circuit Court shared insights regarding their preferences as to effective appellate advocacy. They noted that counsel must be always mindful of the their professional responsibility for candor, clarity, and civility. The judges also discussed guidance from the U.S. Supreme Court on certain substantive claim issues, attorney fee awards, and damages law in patent litigation.

Developments in IP Adjudication – Perceptions of the Appellate Bench

A partner in the Litigation Department, Nicholas Groombridge focuses exclusively on intellectual property litigation matters. Over the past 25 years, Nicholas has been extensively involved in all aspects of patent litigation. He has been lead counsel in numerous patent infringement actions in federal district courts and has successfully argued many cases in the Court of Appeals for the Federal Circuit. Nicholas has litigated a wide array of patents ranging from pharmaceuticals, biotechnology, consumer electronics, specialty chemicals, automotive parts, financial services, medical devices, as well as software and web services. He is a frequent speaker on developments in patent law. He currently teaches courses on patent litigation at Columbia Law School and NYU School of Law. He has been quoted on intellectual property law issues in leading business publications, including The Wall Street Journal, the Financial Times and Fortune.

For more than forty years, Doug Cawley has been engaged in the trial of complex cases and has handled major intellectual property matters throughout the United States and across the globe. He has served as lead counsel in six patent infringement trials that have earned him numerous awards. Mr. Cawley is ranked as a leading intellectual property lawyer by Chambers USA and is included in the Lawdragon 500 listing of "Leading Lawyers in America." In September 2015, he was profiled in Law360's "Trial Aces" special feature, which recognized the Top 50 trial lawyers in the United States. Mr. Cawley is a Fellow of the American College of Trial Lawyers, and a member of the American Intellectual Property Law Association and the American Bar Association Section on Intellectual Property Law. He is a frequent speaker on patent litigation at seminars throughout the country.

Ruffin Cordell is a Principal of Fish & Richardson in the firm's Washington, DC, office. A member of the award-winning intellectual property litigation group, his practice emphasizes all aspects of intellectual property litigation. He appears regularly as lead counsel before federal district courts throughout the country, and has extensive experience before the International Trade Commission in Section 337 proceedings. In 2012, Mr. Cordell was elected as a Fellow of the American College of Trial Lawyers. Over his career, he has handled hundreds of patent and trade secret cases. Prior to joining Fish & Richardson, Mr. Cordell served as a Patent Examiner in computer interface device technology at the U.S. Patent and Trademark Office. He has also been named one of The Best Lawyers in America, a "Top 50 Under 45" attorney in IP Law & Business, and a Legal Times' "Leading IP Lawyers in D.C."

A native of Bryan, Texas, Harry "Gil" Gillam settled to practice in East Texas because "I knew this was where I could go and practice among the best." A Fellow in the American College of Trial Lawyers, Gil's clients include businesses and professionals in complex commercial litigation and intellectual property matters. Nationally known law firms and in-house counsel from Fortune 500 companies turn to Gil for his insights and acumen in the courtroom. Decades of trying cases in the courts of the Eastern District have deepened his roots here, but he's often called upon to represent clients in matters across the country. Regardless of whom he's representing or where the case takes him, however, he says, "the principle is the same. The courthouse is one place where no matter who's involved, in a court of law, before a judge and a jury, you stand on equal footing."

Barbara M.G. Lynn received a J.D. from Southern Methodist University Dedman School of Law in 1976. She was in private practice from 1976-99 at the law firm Carrington Coleman in Dallas, Texas. She was the firm's first female associate and then became the firm's first female partner prior to joining the bench. In 1999, Lynn was nominated by President Bill Clinton to a seat on the United States District Court for the Northern District of Texas vacated by Harry Barefoot Sanders, Jr. She was confirmed by the U.S. Senate on November 17, 1999 and received her commission on November 22, 1999. On May 1, 2016, she became the Chief Judge of the Northern District of Texas, the first woman to hold the position.

Leonard Philip Stark is a Rhodes Scholar who earned his law degree from Yale Law School in 1996. From 2002-07, he served as an Assistant U.S. Attorney in Wilmington. In 2007, the judges on the United States District Court for the District of Delaware selected Stark to be a United States magistrate judge in Wilmington. On March 17, 2010, President Obama nominated Stark to fill the vacancy created when President George W. Bush elevated Judge Kent A. Jordan to the United States Court of Appeals for the Third Circuit in 2006. The U.S. Senate confirmed Stark on August 5, 2010, and he received his commission on August 10, 2010. He became Chief Judge on July 1, 2014.

Rodney Gilstrap received a Bachelor of Arts from Baylor University in 1978, where he graduated magna cum laude. He earned his J.D. from Baylor Law School in 1981, where he was associate editor of the Baylor Law Review. He later served as president of the Baylor Law Alumni Association. He is notable for presiding over more than one quarter of all patent infringement cases filed in the country. On May 19, 2011, President Barack Obama nominated Gilstrap to a seat on the United States District Court for the Eastern District of Texas. Judge Gilstrap was confirmed on December 5, 2011 and he received his commission on December 6, 2011.

Sharon Prost was appointed by President George W. Bush in 2001 and assumed the duties of Chief Circuit Judge on May 31, 2014. Prior to her appointment, Judge Prost served as Minority Chief Counsel, Deputy Chief Counsel, and Chief Counsel of the Committee on the Judiciary, United States Senate from 1993-2001. She also served as Chief Labor Counsel (Minority), Senate Committee on Labor and Human Resources from 1989-93. She served for fifteen years in five different agencies of the executive branch including the Department of Treasury, National Labor Relations Board, and General Accounting Office. Judge Prost received a B.S. from Cornell University in 1973, an M.B.A. from The George Washington University in 1975, a J.D. from the Washington College of Law, American University in 1979, and an LL.M. in tax law from The George Washington University School of Law in 1984.

William Bryson was appointed by President William J. Clinton in 1994. Prior to his appointment, Judge Bryson was with the United States Department of Justice from 1978-94. He was with the Office of the Solicitor General from 1978-79 and 1986-94, and the Criminal Division of the Department of Justice from 1979-86. He was an Associate at the Washington, D.C. law firm of Miller, Cassidy, Larroca and Lewin from 1975-78. Judge Bryson served as law clerk to the Honorable Henry J. Friendly, United States Court of Appeals for the Second Circuit from 1973-74, and as law clerk to Justice Thurgood Marshall, Supreme Court of the United States, from 1974-75. Judge Bryson received an A.B. from Harvard University in 1969 and a J.D. from the University of Texas School of Law in 1973. Judge Bryson assumed senior status on January 7, 2013.

Richard Taranto was appointed by President Barack H. Obama in 2013. Judge Taranto practiced law with the firm of Farr & Taranto from 1989 to 2013, where he specialized in appellate litigation. From 1986-89, he served as an Assistant to the Solicitor General, representing the United States in the Supreme Court. He was in private practice from 1984-86 with the firm of Onek, Klein & Farr. Judge Taranto served as a law clerk at all three levels of the federal court system. He clerked for Justice Sandra Day O'Connor of the Supreme Court of the United States from 1983-84; for Judge Robert Bork of the United States Court of Appeals for the District of Columbia Circuit from 1982-83; and for Judge Abraham Sofaer of the United States District Court for the Southern District of New York from 1981-82. Judge Taranto received a J.D. from Yale Law School in 1981 and a B.A. from Pomona College in 1977.

Kara Stoll was appointed to the United States Court of Appeals for the Federal Circuit by President Barack H. Obama on November 12, 2014, and assumed her duties on July 17, 2015. She practiced law with the firm of Finnegan, Henderson, Farabow, Garrett and Dunner from 1998-2015, and became a partner in 2006. While in private practice, she specialized in patent litigation with an emphasis on appeals. Judge Stoll was an adjunct professor at George Mason University Law School from 2008-15 and at the Howard University School of Law from 2004-08. From 1997-98, she served as a law clerk to The Honorable Alvin A. Schall of the United States Court of Appeals for the Federal Circuit and worked as a patent examiner at the U.S. Patent and Trademark Office from 1991-97. She received a J.D. from the Georgetown University School of Law and a B.S.E.E. from Michigan State University in 1991.