Javier Cabanillas, Shannon Blankenbeker, Hannah Brewer, and Enrique Rojas were among the Baylor Law students presented with awards for their pro bono service. More than 175 students received awards or were recognized for their achievements in academics, advocacy, law review, and pro bono and public service during the 2017 John William & Florence Dean Minton Student Awards Ceremony and Lecture Series.

A full listing of the donors and award recipients is available in the ceremony program.


A Theme of Excellence The ceremony is named in honor of John William Minton and Florence Dean Minton–their daughter, the late Polly Minton McLeRoy established and endowed the lecture series in 1993 to honor her parents. At the ceremony, Baylor Law honors and recognizes the outstanding achievements of current Baylor Law students.

"I am delighted that the Student Bar Association organizes this event every year to highlight the achievements of our students," said Dean Brad Toben during the ceremony. "The theme of the night is excellence. As Baylor Law students, you have self-selected to follow a more difficult and more rigorous path. Becoming a Baylor Lawyer is not easy. But, through your hard work and your grit, you will serve your clients, your profession, and your community with a commitment to excellence. That is what it means to be a Baylor Lawyer."

A Distinguished and Inspiring Speaker "If I can tell you the three most important things I have learned in the fifteen years since graduating from Baylor Law," said Bruster, "it is these three things: 1. Your name is uniquely yours–think about what you want your name to mean to other people. 2. Strive to do all things with excellence–don't just aim for passing, aim for the high A. And, 3. Sometimes, success is different from significance–significance often comes out of love and generosity."

Over the past twenty-four years, the award ceremony and lecture series has welcomed many distinguished speakers whose words have inspired thousands of Baylor Law students. Among the previous speakers are: the Honorable David Sibley, Principal of The Sibley Group and a former Texas State Senator; Cindy Dyer, Director of the Human Rights Program, and Vice President of the Vital Voices Global Partnership; the Honorable Ed Kinkeade, Federal Judge for the United States District Court for the Northern District of Texas; and Chet Edwards, former United States Representative for the 11th Congressional District of Texas. 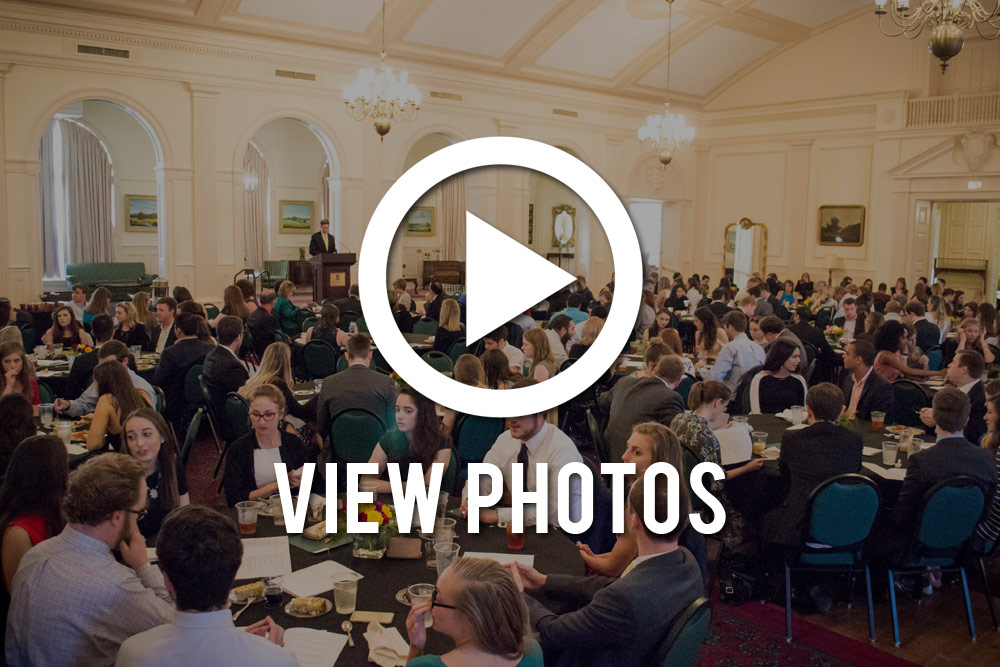 Baylor Law Students and Their Commitment to Pro Bono Service

Among the many accomplishments honored this year, five Baylor Law students were recognized for each having completed over 225 hours of pro bono and general service work during their time at Baylor Law. Baylor Law has a deep commitment to service: service to clients, service to the bar, and service to the community. These students are exemplars of what it means to become a Baylor Lawyer.

"Being a part of the Baylor Law pro bono program was the highlight of my law school experience," said Lena Proft, a graduating 3L and one of the five students who completed 225 hours of pro bono service. "I enjoyed interacting with real people and being able to apply concepts taught in class. I recommend everyone give back if they are able."

"Baylor Law School is committed to instilling the virtues of servant leadership into all of our students," said Stephen Rispoli, assistant dean of student affairs and pro bono programs. "I am thrilled with the extremely high participation rate of our students in pro bono and public service programs. Especially so with those who have gone above and beyond to improve access to justice in our country through their volunteer work. Our students are the future leaders of our profession, and their commitment to the rule of law and access to justice is inspiring."